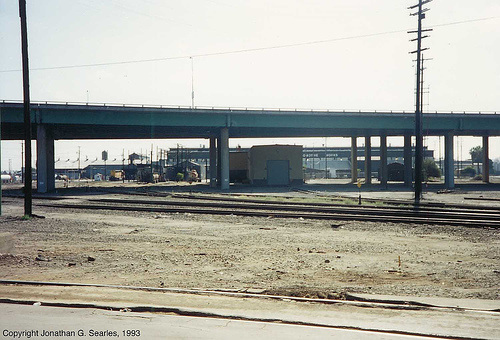 This shot looks difficult to get, but in actuality all I had to do to get it legally was point the lens through the chainlink fence. This is certainly a period shot at this point, though, as most railroads, especially Union Pacific, the current owners of this works, use diesels with safety cabs now. When I took this, though, this was a Southern Pacific facility, and if you look carefully to the left, you can see an EMD SD45 painted in the Kodachrome color scheme that was planned for the aborted Souther Pacific/Atchison, Topeka, & Santa Fe merger. These locomotives were a common sight in the 1980s and early 1990s, but now they're of course very, very rare, if there are any left at all. There are obviously some other locos in the photo too, but its the SD45 that really stands out to me.
Suggested groups:
Comments