Lhasa and the Potala 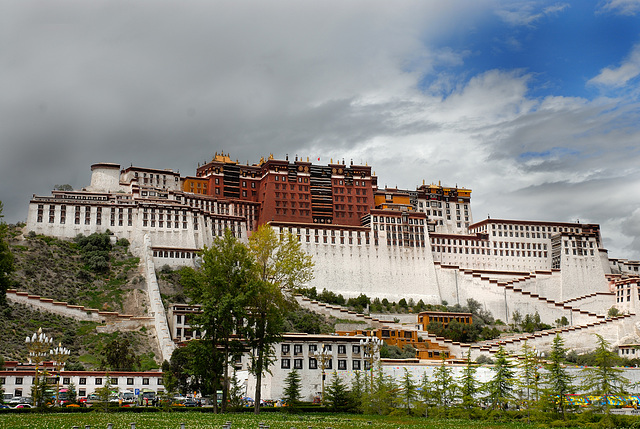 The Potala Palace rises a further 170 meters and is the greatest monumental structure in all of Tibet. Early legends concerning the rocky hill tell of a sacred cave, considered to be the dwelling place of the Bodhisattva Chenresi (Avilokiteshvara), that was used as a meditation retreat by Emperor Songtsen Gampo in the seventh century AD. In 637 Songtsen Gampo built a palace on the hill. This structure stood until the seventeenth century, when it was incorporated into the foundations of the greater buildings still standing today. Construction of the present palace began in 1645 during the reign of the fifth Dalai Lama and by 1648 the Potrang Karpo, or White Palace, was completed. The Potrang Marpo, or Red Palace, was added between 1690 and 1694; its construction required the labors of more than 7000 workers and 1500 artists and craftsman. In 1922 the 13th Dalai Lama renovated many chapels and assembly halls in the White Palace and added two stories to the Red Palace. The Potala Palace was only slightly damaged during the Tibetan uprising against the invading Chinese in 1959. Unlike most other Tibetan religious structures, it was not sacked by the Red Guards during the 1960s and 1970s, apparently through the personal intervention of Chou En Lai. As a result, all the chapels and their artifacts are very well preserved.

, , grey_hound_49 have particularly liked this photo