Latest posted Navigate on the map Photos with specific people Most appreciated Most viewed Most commented Search by keywords Search by date
See also... Wolfgang's
favorite photos All the photos where
Wolfgang appears 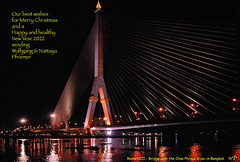 All friends of photography here at Ipernity and all their relatives our best wishes for a merry christmas and an happy, healthy and carefree New Year 2022 yours Wolfgang and my wife Nattaya from Bangkok We are all looking forward to more beautiful motifs and good light for many great photos. 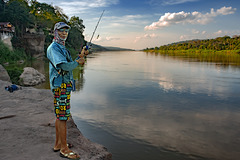 Wat Hin Mak Peng at the riverside of Mekong

Nearby the northern city Nong Khai at the river of Mekong fishing is the pleasure of locals and tourists from far away. Fishing the Mekong River was formerly Nong Khai's biggest earner. Thai and foreign, visit the city every year and come for fishing. Other side of Mekong river is Laotian territory. 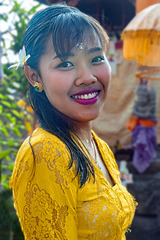 Portrait of a Bali girl

I Gusti Agung Ayu Adii Widiadnyani dressed to join the Kuningan festival hold on early morning in the small village Sembung. Adii, as I call her with her short name, was dancing in many different masks as the goddess Vishnu, as the Bidadari flower girl, as the Lenda Lendi demon and at the Sekar Jepun festival. I allready postet her portratis photos in other settings: 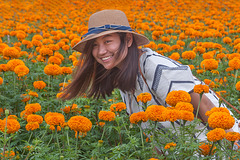 Young model in the marigold field

A young Korean tourist guest got captured for a memory photo in the middle of a blooming marigold field. The Bali marigold fields near Klungkung might just be one of the most unique and unexpected landscapes on the island. 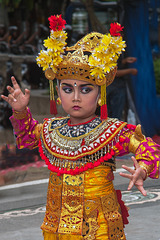 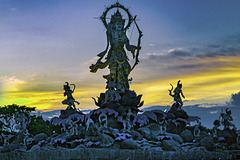 For a few months now Denpasar has had a great, monumental symbol, the Titi Banda statue. The construction of this statue was an innovation in embellishing the cityscape of Denpasar. The statue tells stories from the Ramayana epic, namely the story of Rama, in which he defeated the "Titi Banda Bridge" in the middle of the world with the help of a group of monkeys to get to his beloved Sita. The colored lighting is not an exaggeration, the blue glow seems almost kitsch for the western opinion. 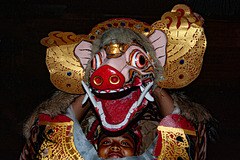 The picture captured today shows a young boy named I Made Atos Purnama dancing in the Barong mask in front of the home I live on Bali. Barong is probably the most well known dance. It is also another story telling dance, narrating the fight between good and evil. Its a character in the mythology of Bali. He is the king of the good spirits and enemy of Rangda. The boy shows his face underneath the pigs mask to see the steps in the darkness along the street. 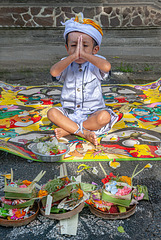 The youngest son of Ni Kadek Mayang praying inside the private temple in Desa Sembung this morning. The holiday Kuningan is to be celebrated today on Bali. Kuningan day, that marks the end of the Galungan holiday, is celebrated every 210 days, ten days after Galungan. 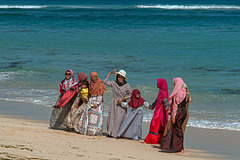 Muslim girls and women on Bali

At the Pantai Pandawa beach goups of muslims came from Java to enter the island Bali. Bali it now has Muslims constituted about 15 per cent of the permanent population. In some parts like the western side of Bali, the percentage is much higher. 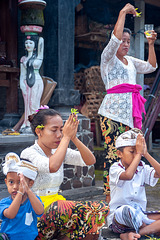 The daily pray inside the private temple

The Balinese consider magic as true and the power of spirits and much of their religion is grounded in this belief. As in Hinduism, Balinese religion is a quest for balance between the forces of good and evil. My photo shows my host and close friend Ni Kadek Mayang Sari, her son Gunggus Wijaya, her nephew I Gusti Agung Wiraditya and her sister in law I Gusti Agung Ayu Swasti who gives the holy water with a flower bloom to every bodies head. 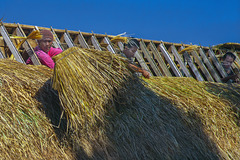 Some Bali Aga workers are roofing the house in Tenganan one of the last origine Bali Aga villages. They built houses with floors above the level of the surrounding ground and used alang (the tough broad leaved grass used as thatch) to roof their houses. 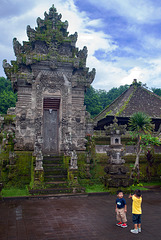 Penglipuran Village is one of the traditional villages that located in Bangli Regency, Bali Province, Indonesia. Penglipuran village is famous as one of the tourist destinations in Bali because of its society who still preserve their traditional culture in their daily lives. The architecture of buildings and land processing still follows the concept of Tri Hita Karana, the philosophy of Balinese society regarding the balance of relations between God, humans and their environment. Penglipuran Village succeeded in building tourism that benefited all of their communities without losing their culture and traditions. In 1995, Penglipuran Village also received a Kalpataru award from the Indonesian Government for its efforts to protect the Bamboo Forest in their local ecosystem. 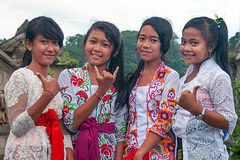 Cute Balinese girls represent themselves on the street inside the Open Air Museum Penglipuran nearby Kintamani middle of the island Bali. The girls invited me to join the round walk in the beautiful highland village. 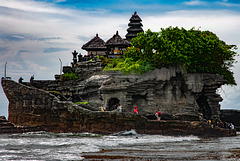 Pura Tanah Lot epitomizes the romantic island of Bali. Tanah Lot means "Land in The Sea", a perfectly fit name for its unique offshore settings. The silhouette of Pura Tanah Lot is one of the most popular iconic features of Bali. The temple was built to worship Bhatara Segara, or the god of the sea. 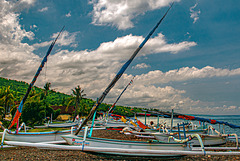 My starting point for amazing dive tours nearby Amed hiring the boat for 38 US$ eight hours. 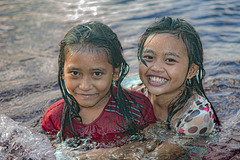 Hi, my name is Komang from Bali, and my name is Komang too. Two girls playing in the water at the beach of Jemeluk. Both names are Komang. This name is traditionally given to the third-born child in Balinese families 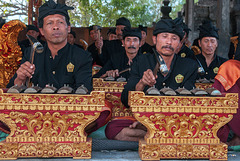 Gamelan player at the saron barung

The gamelan music is the typical music on Bali and sounds mostly at the evening on most places in Balinese villages. The gamelan predates the Hindu-Buddhist culture that dominated Indonesia in its earliest records and thus represents an indigenous art form. The men playing the saron, an instrument played in every gamelan orchestra. In a pelog scale, the bars often read 1-2-3-5-6-7 across (the number four is not used because of its relation to death. 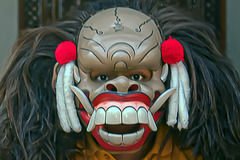 Anom in the mask of Celuluk

Celuluk is one of the characters in the Calonarang dance drama based on the story of the 11th century King Erlangga, who was born in Bali, and became one of the greatest kings of Java. Colonarang is the widow witch who becomes Rangda. The powerful drama is always played at night in the village I was invited in Sukawati-Gianyar.
5386 items in total
Jump to top