The Holy Kailash in Tibet 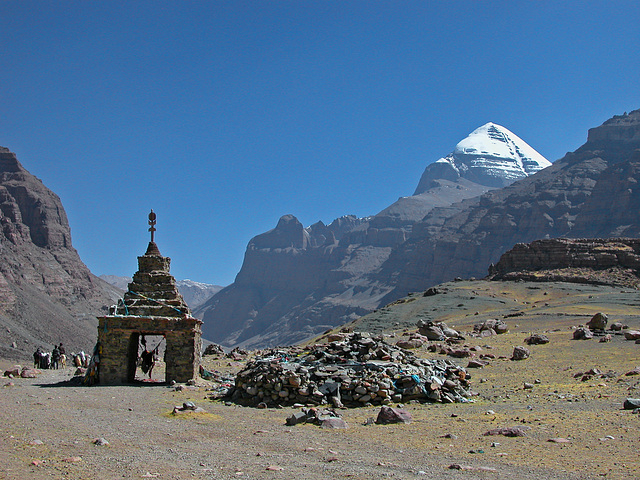 Barely a century ago, Mt. Kailash (6,658m) was shrouded in mystery. This holiest of sacred mountains was once only a myth to the outside world. Assumed to lie somewhere between the vast expanse of China and the subcontinent of India, it lay hidden within the forbidden land of Tibet. To the Tibetans it is Gangkar Ti se or Gang Rimpoche (Precious Snow Mountain) and is revered not only by Buddhists but also by millions of Hindus, Jains and followers of other traditional faiths.

The mountain is out of consideration for its religious meaning so far
not climed yet. First permission for mounting to the summit was given to Reinhold
Messner (1985), which he requested a permission for the surrounding area. This
done however without the execution. Since then no further permission
was given, also not in the year 2001, as the Spaniards Jesús Martinez
Novaz has planned an expedition for "political demonstration against
environmental degradation and for larger, global consciousness"
defined. This led however to world-wide protests of different groups
of religions, which, supported from famous mountain climbers, reject a
mounting of the Kailash.

Thank you Reinhold Messner for your consideration to all the people who believe in this holiness of the great jewel mountain!

ColRam, bajy, , and 2 other people have particularly liked this photo

Hi Daniela, thanks for your comment, I did the "Kora 54 km around the Holy Kailash" and I did it one time in three days. Some (most Tibetian) people do the Kora in one step without any (longer) breaks and need one day. Many hyper religious Tibetian surround the Kailash by measure their length of the body step by step, they need more than three months and after they are closer to the NIRWANA. If some one surrounds the Kailash 108 times his next step is coming into the NIRWANA. Also in the Buddhist religion every body can buy his way into the heaven - a kind of corruption in every religion.
13 years ago. | Permalink