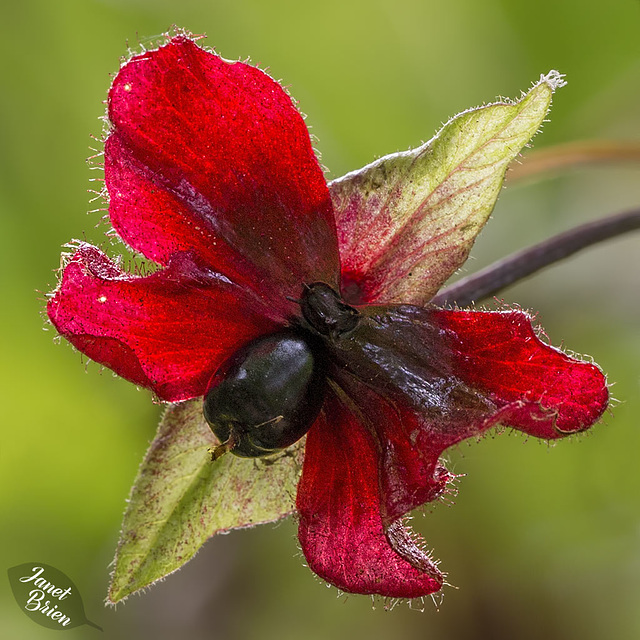 I want to make sure I have time to post this so I'm just posting a quick note to go with my pictures today! We are about to leave our wonderful campground, Bullard's Beach State Park and we had a wonderful stay! We will be heading about an hour north for a three day-stay at our next campsite. Unfortunately, that was the longest we could get for the time slot, but after another four days at a different place, we'll be back for another four days. Heh, I know that's not the same thing as seven uninterrupted days but sometimes you don't have a choice in these things!

Today's Pictures
I had a very nice time creeping around with my macro lens and got bunches of really neat pictures. Along the way I found these marvelous bushes covered with red-cloaked, round black berries. I thought it was very interesting that the berries grew in pairs…and so when I discovered the name of this plant was Twinberry, I had to laugh! Perfect!

While I took photos, I couldn't help focusing on my favorite part--the beautifully shaped, red bracts surrounding the berries. Upon investigating online, I learned they are called involucre, and is part of the botany name of Black Twinberry, "Lonicera involucrata". (These plants also have a red version, naturally called Red Twinberry) I was also fascinated to learn that these berries are a kind of honeysuckle! The plant grows like a bush, which threw me off because I thought all honeysuckles are vines. However, when I learned it was in the honeysuckle family it all made sense do me. The honeysuckle that grows on our property has the very same berries, except that they are red. The leaves are the same too, and looking at pictures of the flowers, they are also quite similar. It's so fascinating to see the various species of a plant group, isn't it?

So, as I took pictures, I took turns concentrating on the berries and then the lovely red bracts. Then I saw a lovely red flash…and gasped in surprise! Would you just look at that? Bracts that appeared to be a lovely red butterfly with perfectly shaped berries to represent a thorax and head! Seriously, what are the odds?! :D This picture just HAD to be my main image today! I'm also including some other views of these pretty berries--a pair to admire and a folded-over bract that looks like a red bat! :) I hope you like them!

I wanted to give everyone hugs for all of the attention you've been giving my pictures, and for the lovely comments and stars. I appreciate you all so much. I was able to visit some of you finally and it was great to see what you've been sharing with us here on ipernity! Here's hoping everyone stays safe and healthy in these crazy days!

Here's more information about these berries that I found very interesting: Twinberry, also called bearberry honeysuckle, is in the honeysuckle family. Twinberries are very common in the Cape Lookout State Park at the base of Netarts Spit. Unlike their cousins, the climbing and pink honeysuckles which are twining vines and can occur in our area, the twinberry is an erect shrub that may grow to more than twelve feet high. Its paired yellow flowers each have a five-lobed, tubular corolla. The flowers are subtended by a pair of large, green bracts that turn red as the fruits mature into pairs of shiny black berries. These berries are bitter and considered inedible, but their juice has been used as a dye. Its leaves are opposite, they have petioles, and they are rather shiny on top. They drop off in the winter. There are two varieties of twinberries, the coastal Lonicera var. ledebourii, occurring in coastal Oregon and California, and the mountain Lonicera var. involucrata, found in all western and the lake states. From Netarts Bay Today

appo-fam, Nouchetdu38, Jörg, Fred Fouarge and 58 other people have particularly liked this photo

Ruth club
Lovely shot Janet. I did smile about how you were getting 7 days in one place :)
4 weeks ago. | Permalink

Thank you for posting in the group
www.ipernity.com/group/magicalsunlight
4 weeks ago. | Permalink

RHH club
Incredible photo, Janet. The light, the wonderful mimicry and the crop are all perfect. I've seen the plant and photographed it but I've nothing that even comes close to this. Actually, I just looked and the only photo of these I've posted is one of Nance's photos: www.ipernity.com/doc/162835/27716991. It's probably better than anything I could have gotten.

I think we are leaving for the Olympics tomorrow morning early. We'll catch the ferry from Coupeville to Port Townsend and then drive to Port Angeles. No itinerary but I'm inclined to go around to the beaches on the west side and to the Hoh Rainforest. Need to do some hiking to stay in shape for the big hike which is now not far off.

Hope your next stop and camp is as good as the last.
4 weeks ago. | Permalink

Admired in:
www.ipernity.com/group/tolerance
4 weeks ago. | Permalink

Jenny McIntyre club
Wow it does look like a butterfly you are right, Janet. How amazing is that? So you are now on another campground and no doubt enjoying yourselves. It is a shame that you are unable to stay the full 7 days there, but as you say - you can come back and do another 4 later. I am so pleased that you are having fun and relaxing too.
4 weeks ago. | Permalink

tiabunna club
Marvellous detail in this close-up, Janet, and it does indeed look like a red butterfly on first glance. Very glad to see that your travels are going well, even if you need to shift camp occasionally. Best wishes and stay safe.
4 weeks ago. | Permalink

Annemarie club
So so beautiful Janet. Thanks for your visit
4 weeks ago. | Permalink

I love the different colours and shapes of this gorgeous flower.............and the detail you've captured in the images is just perfect. The main (butterfly) image is definitely my fave..!!

Outstanding work as always Janet. I hope your change of location goes well and that your new plot turns out as well as your last one!! Have a great time and stay safe.

I hope Steve's recovery is continuing well - meanwhile, don't work him too hard :-))
4 weeks ago. | Permalink

Wolfgang W.W.
very beautiful photos! And continue to have a great and good time!
Best Wolfgang W.W.
4 weeks ago. | Permalink

Pam J club
NATURE IS SO CLEVER !
4 weeks ago. | Permalink

Eunice Perkins club
Especially lovely with the back light making it glow! This plant does not need to be edible. It has such beauty ,
4 weeks ago. | Permalink