We're Having a Great Time, and Here's a Steller's Jay Warming Itself! (+2 insets) 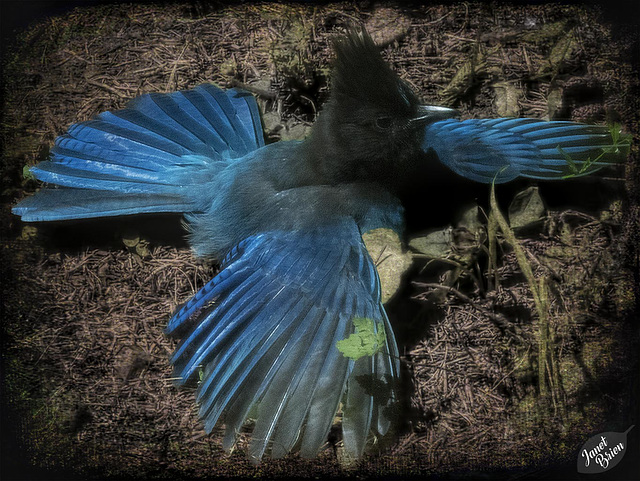 This is the Life!
We are nearly through our second full-week of camping now and life is great! Everything we'd hoped this trailer would be for us has been realized. It's spacious, well-made (ok, within reason…heh…trailers = shoddy builds), totally comfortable and has more storage that we need so we aren't having to repack everything when we are getting an item we're after.

Happy Animal Family!
Our animal family is doing great! Pumpkin, our darling parrot, is as happy as a clam with mom and dad usually close by whenever we're in the trailer. One way to tell that she's at ease is the amount of food she eats. Perhaps she needs a piggy tail as she's chowing like a 700-pound porker, yay! :) Meanwhile, our near-20-yr old frogs are content enough that they are hooting at one another and eating crickets with wild abandon. We are joyfully amused that they take turns soaking in the little pool we have for them, it's such a cute sight! And last but not least, Snakey McSnakerton started the trip in pre-shed condition with a gray sheen and opaqued eyes. We offered him a mouse a few days ago but as we expected, he didn't eat it--he rarely eats just before he sheds but we wanted to give him the opportunity. Yesterday Steve turned Snakey's light on and found a bunched-up shed up against the glass--for the next while he stood cooing beautiful, gleaming sentiments at our lovely boy. Snakey really is extra pretty just after he sheds! At lunchtime I got a mouse ready for him (they are frozen so I thaw and warm one for him before offering) and after dancing it around in front of him and placing it nearby, I was happy to find him swallowing the last of it when I checked in a bit later. So it's official--all of our animals think the RV lifestyle is fantastic, just like we do! :)

Steve's Injured Leg is Nearly 100% Better!
I didn't mention that just before we left on our trip, Steve seriously hurt himself. A ladder he was on shifted and fell in the gravel driveway and he sustained a terrible sprained ankle and badly-twisted knee. For the entire week at Humbug Mountain State Park, Steve was barely able to walk around without being in a lot of pain. Unfortunately, there were a lot of things he needed to do which kept him from resting his leg, all of which prolonged the injuries. However, as he was able to rest and elevate his leg, it very slowly began to get better. In the past few days the rate of recovery has really sped up. In fact, for the first time this trip, we went on a bike ride a couple of days ago! It was such a gentle trip around the three campground loops that Steve added another mile down one of the bike paths! And last night he was able to walk up and down the three stairs inside our coach without using the handrail or going down one step at a time. We lit up the coach with our beaming smiles of relief and happiness, isn't it just wonderful?!

Time to Relax and Enjoy our Stay
We learned last year that short stays at a campground are a bummer. Just when you've really relaxed and begun to feel at home, it's time to pack up and leave for the next spot. These 2-4-day stays made us feel hurried, unhappy and stressed-out. We decided that the perfect length of stay would be a full week if possible, with five days being a preferred minimum. So, for this trip, we've aimed at 7-day stays at our chosen campgrounds and the result has been fantastic! We have time to do what we want to without feeling like we must plan our days carefully to fit everything in. We just enjoy ourselves and whatever happens, happens! Time to be lazy and take naps, swing in the hammock or sit in our lounge chairs just watching folks walk or ride by. Time to read, do crosswords or cruise the 'net (if it's available). Time to go on my daily morning walk, or go out later with my macro lens and creep around for cool shots. Time to listen to the birds singing or maybe even watch them doing their thing. Time to cuddle Chicken (Pumpkin) and look at our frogs and snake. Time to go on bike rides or go on hikes. There's even time to play video games if we want! Finally, Steve and I can stay in these beautiful places and really relax and soak up all they have to offer. We are at peace.

Today's Pictures
I've got piles of processed pictures building up but today I've decided to share the blue jay pictures I captured last week. One day when we were at Humbug Mountain State Park, Steve saw a flash of blue and looked out to see that a Steller's Jay had landed next to the trailer. He called to me so I could see and then exclaimed, "Oh wow! It's sunning itself!" I looked out and we stood watching the beautiful bird warming its wings, a second bird landing nearby a moment later. I didn't think I'd be able to get pictures before the birds flew away but Steve reminded me that it's worth a try. I'm so glad I got my Sony because I was able to get a whole bunch of pictures before finally the pair flew away. I'm sharing two insets as well--one shows a nice side view and the other is a feather close-up! ENJOY!

I hope everyone is doing well!! I'll be posting again in the next few days with some really neat finds! *BIG HUGS ALL AROUND*

Suggested groups:
39 comments - The latest ones

Lovely shots of this jay -- we just watched a couple of them in Golden Gate Park, didn't have the right camera to get a decent shot. You captured their color beautifully.
16 months ago. | Permalink

I love your story, and the spectacular colour of the jay. The first PiP is my favourite.
16 months ago. | Permalink

Very impressed with your Jay. thanks for posting
16 months ago. | Permalink

Over in England Janet they call a bird spreading its wings on the ground anting. It lets the ants remove parasites and pests.
16 months ago. | Permalink

Admired in:
www.ipernity.com/group/tolerance
16 months ago. | Permalink

YOU HAVE FINALLY LEARNED THAT YOU SIMPLY DO NOT HAVE TO BE "DOING" SOMETHING 24/7 !!!!

An excellent capture Janet.
Stay safe and thankyou for posting to FFF.
16 months ago. | Permalink

Such a fantastic looking bird - I love it's iridescent colours! You've captured it perfectly Janet. I especially love the image in the first PiP (and it's punk hairstyle).

It's great to hear you're having the time of our life! Sorry to hear that Steve was injured, but also pleased to hear that he's well on the mend. He's very lucky he didn't break any bones..!!

Take care of yourselves!
16 months ago. | Permalink

That's a beautiful bird and your images also give an excellent representation of its plumage and some of its habits. Great to hear your news and that you're having a good trip. Stay safe and keep enjoying yourselves.
16 months ago. | Permalink

Nice jay. We don't have these on the east coast, but there is a family of 3 blue jays that live nearby that are always out when I don't have a camera, but disappear when I do.
16 months ago. | Permalink

Steller's jay doesn't live in Europe and I didn't know this marvellous bird! I love the dark blue colour and the imposing crest!
16 months ago. | Permalink

It's a Stellar Jay (or as we call them casually, a Scrub Jay). This is as opposed to a Blue Jay. The Blue Jay has white on it as well and lives on the east coast of the united states. The Scrub Jay is in the western unites states.
16 months ago. | Permalink

and thanks for adding it to my group 'my favorite animals'. i had seen your photo in my news stream, and was going to ask for you to put it there - but you beat me to it!

so glad you are getting to enjoy the summer. and how fun that you are a travelling zoo!
16 months ago. | Permalink

Amazing photos of the Steller's jay. It must be very rare to see a bird do that sort of thing. I've seen birds giving themselves dust baths like that.
16 months ago. | Permalink

A remarkable set of images and beautiful colours in these lovely captures Janet
16 months ago. | Permalink

Wow what fantastic pictures, Janet. It's so lovely hearing the joy and excitement in your words. It's great to know that at last you two are really relaxing and enjoying yourselves, even with the menagerie!!!! I'm also pleased to hear that Steve's leg is on the mend - maybe it'll be a good idea if you hold the ladder for him the next time he has to go up one!!!
16 months ago. | Permalink

Lovely to read that you are enjoying your camper so much. Good, too, that Steve's leg is healing. What a terrific animal family you have!! Lovely shots of the Steller's Jay!
16 months ago. | Permalink