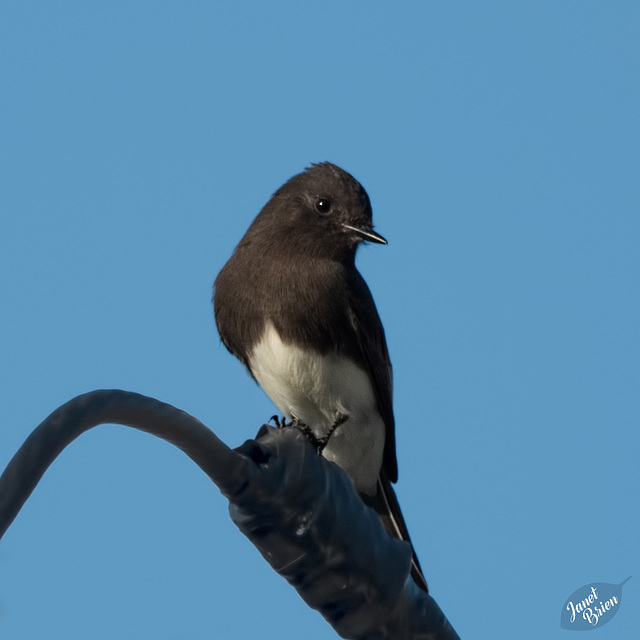 Hello everyone! :) My cage continues to be rattled for new pictures so I found this pair of images to share today! :)

First--thank you so much for all of the wonderful comments and care. You guys are just wonderful and I am very touched by your attention. I am trying to stop being affected so much by my constant flurry of worried thoughts…slowly but surely I'm adjusting. It's tough, even after months of this. However, as time is going on and folks here aren't all dropping like flies, I'm feeling more and more encouraged and hopeful about things. I really appreciate the support. You have no idea how much its meant to me. I feel so broken about all of this and it's very nice to feel like I'm not as hopeless as I thought I was…

Today's Pictures
Last October when I was on my morning walk, I noticed some birds I hadn't seen before--cute little guys who were sitting on our power lines and twittering away on that lovely new day. I crossed my fingers that they'd still be there when I came back with my Sony camera and I was so happy when I returned and the birds were still there! I didn't want to get too close and scare them away so I got pictures from a distance--lucky me, they turned out really well! A bit small but still, look at the detail!! Such a cutie pie!

This camera I have is the Sony DSCRXx10IV. I was pushed over the edge to add it to our pair of beloved Canon 5D Mk II and III's because of one of my ipernity friends, Roland (ROL/PHOTO). The constant stream of incredible bird and wildlife pictures blew me out of the water and when I learned they came from a new style of hybrid, high-end point-and-shoot camera, I just had to get it. My first favorite camera was the Canon SX30 IS super-zoom and I used it like a fiend until I simply HAD to move up to a DSLR. However, I had always hoped that a camera would be developed that combined the high quality of a DSLR with a point and shoot. The Sony is a HUGE step up from my previous P&S and has allowed me to get fabulous bird pictures that make me so happy!

Doing a search on the internet, I found out I'd captured a Black Phoebe, a kind of flycatcher that makes its home in the western US down though Central America. Of the six subspecies, this is the Northern Black Phoebe which lives in Oregon and California. Wiki: Black Phoebe

Hello Pam!
I hope things are going ok for you these days! The weather's heating up…it's going to be nearly 90 degrees today, yoiks! Our rainfall has been so dismal this year, we fear the fire season will be horrendous. What about you? Sending many hugs your way!! :)

fifi, Frans Schols, micritter, trester88 and 65 other people have particularly liked this photo

Ruth club
This is a very beautiful capture Janet. Lovely to see you here and to know that you are both well. Take care and stay safe my friend.
6 weeks ago. | Permalink

raingirl club
i've never seen a Northern Black Phoebe bird (maybe it likes more rural areas than where i live, even though i have plenty of trees in the west hills of portland) - thanks for the introduction. it is beautiful and a wonderful photo. glad you got a camera that works so well for you!

i'd love to have your photo in my group 'my favorite animals' - if you want.

sorry to hear you have been in such distress. but really glad to hear you are moving through it. i am lucky to live with a well read, positive perspective man who keeps me in balance as best he can.
6 weeks ago. | Permalink

Lee & Luv club
Super, like it much!
6 weeks ago. Translate | Permalink

Pisti club
It is so good that you are posting again. Have a good week!
6 weeks ago. | Permalink

RHH club
Two wonderful photos of a beautiful little bird. We saw them in Death Valley when we were there but have never seen them up here. Shall have to look and see if their range extends this far. Have been enjoying the birds, although they eat us out of house and home. Had a flock of Evening Grosbeaks around for a while but they've gone on elsewhere. The Black-headed arr around every day. Some of them are wasteful monsters, too. Have a Red-breasted Nuthatch that throws out about 15 seeds for everyone he eats.

The Yellow-headed Blackbird is not as aggressive as the Stellars Jays. Have had some experience of them and few birds are as aggressive except maybe the Bluejay, but we don't have them out here in the west. It's amazing but we begin to recognize individual birds after a while since most of our feeders are close to the house. In any case, they are a constant delight so much fun to watch as they squabble, chase each other around and in some cases do their spring business within view.

Cool with a chance of rain today. Dave and Jess and kids are supposed to come over this afternoon but the weather will probably keep us away from the lake. Ed and Jess were supposed to be here as well, but had problems with mold in their apartment that they are trying to sort out. In the meantime they are living with Jess' sister part time and the rest of the time in the two rooms that haven't shown signs of mold. The landlord is dealing with it but taking his sweet time. We won't be going there for a bit.

Hot peppers and hot food: you are a courageous lady to eat a spoon of red pepper flakes every day. I'll continue my solidarity with Steve on that one. If those red peppers that come with the pickles are the ones I'm acquainted with, I don't know how you eat them. We thrown one into our Thai curries but don't cut it open and discard it as soon as the curry is cooked. I'm perfectly happy to be a wimp in that regard and I don't like my head exploding. Neal doesn't like really hot stuff either, so we always tone things down.

I am now on Social Security or will be after my birthday and Nancy is too when she hears from them. What a hassle trying to phone and get all the forms correct. Had to send off extra forms a day or two ago to have them withhold money for taxes. The government gives with one hand and takes with the other. On Medicare A also but are not, I think, going to sign up for B. Have been members for many years of a health share organization and they've paid all our bills for about 4-500 a month.

Not much else new. Have to call my parents and see how they are doing. Dad's resigned himself to no more driving but is not very happy about it. Otherwise they are doing well.
6 weeks ago. | Permalink

Admired in:
www.ipernity.com/group/tolerance
6 weeks ago. | Permalink

Annemarie club
Most beautiful against the blue sky
6 weeks ago. | Permalink

Andy Rodker club
Super bird and shot!
You may not beieve it but you do get used to it! There will be upsetting bits of info and perhaps bad news closer to home but most will get through this. Support will then need to be very carefully targeted at the most needy as we crawl out of this. But I believe we can do it!
6 weeks ago. | Permalink

Joe, Son of the Rock club
I love the angle from which you have photographed the bird. The side-lighting shows lovely details in the plumage, and a sparkle in the bird's eye. A lovely image. Stay safe, Janet. All the best, Joe
6 weeks ago. | Permalink

I HAVE AN EASTERN PHEBE HERE WHO NESTS EACH YEAR.

Keith Burton club
Such a gorgeous little bird............and one I've never heard of before. You've captured it perfectly Janet!

I've been coping by finding lots of things to photograph that would I wouldn't normally do. I'm quite enjoying it, but as our restrictions are gradually being eased I'm considering going out again. We're now allowed to drive somewhere for our exercise etc..........so we're considering a day out in the countryside, but only somewhere where it's easy to keep apart from others, NOT the touristy areas as they're far too peopley for us. We'll probably wait and see how the easing of restrictions goes first though :-)

You should be fine getting out and about on your own property I would have thought. I hope you've been keeping up your morning walks?

Here's an example of one of my recent images that I think you'll like: www.ipernity.com/doc/keithburton/49948340
6 weeks ago. Edited 6 weeks ago. | Permalink

tiabunna club
Lovely captures, Janet. Yes, the better superzooms are able to do a remarkable job, particularly for shots such as these.
6 weeks ago. | Permalink

╰☆☆June☆☆╮ club
Good to see you again Janet.... Stay strong my friend, there is light at the end of the tunnel....
6 weeks ago. | Permalink

Jenny McIntyre club
What a delightful little bird - his feathers look almost furry - gorgeous. Don't worry about feeling a wimp with all that's going on in the world. Even though a lot of our restrictions are being lifted a bit, I'm too scared to go out of this house. The last time I left this house and surrounding area, was January 20th!!!! I can't get out because I can't walk up and down the road, and I can't travel in someone's car, too near!!!! So until I get my own car - I'll stay here on my own. I would be too worried if I were to meet strangers, in case I caught the virus. Silly I know - because the south west of the UK hardly has any COVID19 fatalities. It will all soon get back to some sort of normality I know - but it still will take some courage to feel free again.
6 weeks ago. | Permalink