Heart of a Magenta Dahlia & Checking In! 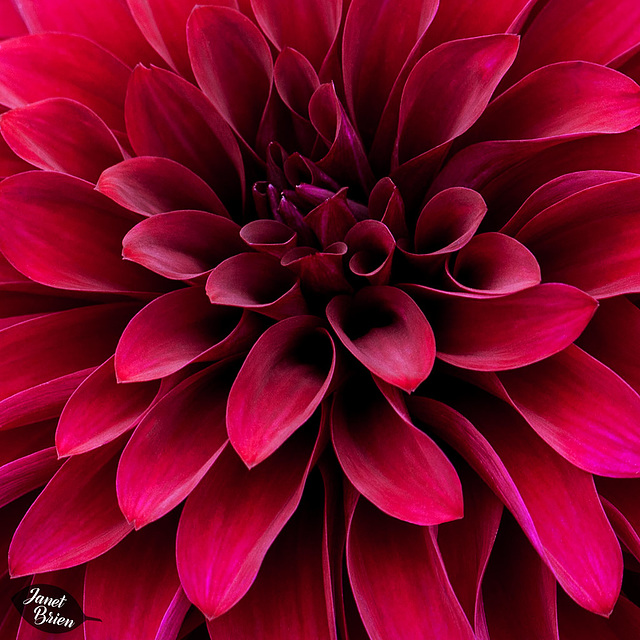 This stunner of a dahlia was one of the beauties that Steve and I photographed at the Dahlia exhibit in San Francisco's Conservatory of Flowers in Golden Gate Park. We visited one day when we were staying at my dad's place and took some time for a photo break. I have another dozen pictures I've processed from that trip and I know there are probably 50-75 other pictures that I could process as well. It just blows my mind how incredibly beautiful these flowers are!

I wanted to let everyone know that Steve and I are doing just great! In fact, when Steve went to Costco a couple of weeks back, the store was almost perfectly stocked and we were able to get one huge pack of toilet paper and paper towels to top us off. We didn't need more than that but it was nice to get it. No sanitizer but we don't really need it anyway. All is well!

We're having a great time immersing ourselves in games but also, the weather is so lovely that Steve went for a bike ride yesterday and I'll follow suit today! :) I have my morning walks every day but it's nice to go out later for a change of scenery.

Oregon continues to show very low numbers compared to California to the south and Washington to the north...we are both convinced that the low number is because Oregon hasn't been testing very many people. In any event, Steve and I view the populous as infected just to be safe. Steve shops only once every two weeks or so, and is out as little as possible.

It does look like things may finally be slowing down in the rate of infections...it feels a lot more positive in the past few days to me, but maybe Spring Fever has infected me and filled me with positive vibes! In any event, I'm definitely feeling a lot better lately! Let's hope things continue improving in a upward spiral! :)

Pam, I picture you and your husband living in your little fortress, just like we are! I'm really glad that Corona hasn't swept over the world and taken everyone out like the media suggested it would. Bad enough that so many have died...the horror of everything that's happened is too hard to look at but let's cross our fingers that things may actually be getting better! * Thinking of you with many hugs! *

Esther, protox, Ànn-Piaframie, Jenny McIntyre and 71 other people have particularly liked this photo

Suggested groups:
53 comments - The latest ones

Mainly though, it's good to hear from you again and nice to note that you seem much more optimistic than you did last time you popped in.

I'm pleased that you and Steve are safe and well and hope that remains the case. Me, Jackie and my extended family are also keeping well.

Take care of yourselves and stay safe.
6 weeks ago. | Permalink

Ruth club
This is a beautiful shot Janet. Glad to hear that yourself and Steve are well. Spring is certainly with us here in the U.K. amid all the bad news we have some wonderful weather, the flowers are all in bloom, the leaves are coming out on the trees and the spring lambs are just starting to arrive in the fields. On the whole apart from this nasty virus, which will pass, all is OK.
6 weeks ago. | Permalink

Peter Castell club
A gorgeous rich colour, all is good plenty of time for gardening
6 weeks ago. | Permalink

Annemarie club
this is a wonderful image Janet
Stay safe and healthy!
6 weeks ago. | Permalink

tiabunna club
A lovely macro image and glad to hear your latest news, Janet. We're heading into Autumn, of course, but so far the weather is lovely and the infection rate locally is low. Have a great weekend and stay safe.
6 weeks ago. | Permalink

Roger (Grisly) club
A superb close up of this beautiful flower Janet, love the colours
6 weeks ago. | Permalink

Ecobird club
It is indeed a stunner Janet. Beautiful colour and detailHave a good weekend and stay safe and well.
6 weeks ago. | Permalink

RHH club
Gorgeous Dahlia and worthy of Explore. Congratulations both on the photo and on Explore.
Stopped by and read your notes several days ago and was pleased to see that you are both doing well and surviving the crisis (and eating well).

We are also and thus far Neal's place has been virus-free and my parents have survived the crisis at their place, though they are confined to their room and unable to visit even with my aunt who is doing poorly and under hospice care.

We've been hiking every week and getting out has been such a wonderful thing. Jess and the kids came over as well on Friday first at the lake and then in the back yard. The kids played with the kayak and then had a fire and roasted brats.

We too are hoping that things get back to normal soon, but wonder what normal will be like. It certainly will be different than what we were used to. The warning are now of a meat scarcity but we hardly know what to believe any more.

We've used our time for baking, cooking, yard work, projects in the house, writing, hiking, photography and have been very busy, but miss family and especially Neal - missed him so much we made arrangements to drive by and wave to him through his window.

All the best!
6 weeks ago. | Permalink

Joe, Son of the Rock club
I love the light & shadow, the deep rich red colour and the very detailed textures. A great macro shot. All the best, Joe
4 weeks ago. | Permalink

Susanne Hoy club
What a gorgeous dahlia! I like the dark red colour. You've chosen the image detail very well. So the pattern of the petals is wonderfully visible.
2 weeks ago. | Permalink

Jenny McIntyre club
This dahlia is absolutely stunning, Janet. It was my late brother's favourite flower and he used to grow as many different varieties as he could. It was wonderful seeing all the different ones.

You stay safe with Steve please. Hopefully it won't be for much longer - this virus has really taken away a lot of enjoyable places and to think that we are not allowed on the beaches, and it's worse for Mandi in Turkey. No-one can go on the beach, nor go for a swim and the temperatures are hovering in the middle 40F!!! Way over 100F!!!! She's melting there - and she and her husband have been talking about going out at night for a quick swim!!!
2 weeks ago. | Permalink