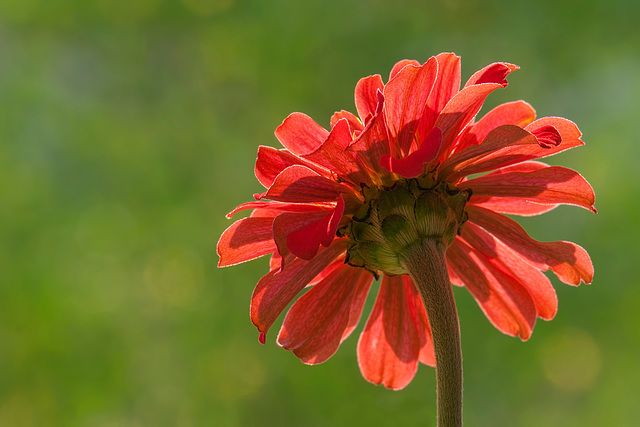 3 more pictures in notes above! :)

Yesterday was one of those days when I got two pictures of a zinnia that I REALLY wanted to use as my Picture of the Day. In the end, I let my husband decide. But I still wanted to show that other picture...so... this morning I took the picture over again! It's not exactly the same (f/11 vs f/14, slight angle variation, flower further along in bloom cycle) but it's very close! I have included yesterday's version in my notes for you to compare--you'll also notice that it's a bit more in the yellow range.) Funny enough, it took quite a few attempts and two visits before I got one that was close enough for me to be satisfied! It was an interesting exercise to try to repeat my picture from yesterday. I figured it would seem simple and prove difficult...and I was right. But it was fun to keep trying until I was happy with the result!

Andy Warhol (August 6, 1928 – February 22, 1987) was an American artist who was a leading figure in the visual art movement known as pop art. His works explore the relationship between artistic expression, celebrity culture and advertisement that flourished by the 1960s. After a successful career as a commercial illustrator, Warhol became a renowned and sometimes controversial artist. The Andy Warhol Museum in his native city, Pittsburgh, Pennsylvania, holds an extensive permanent collection of art and archives. It is the largest museum in the United States dedicated to a single artist. Andy Warhol

Remarkable job duplicating the shots! Just as lovely the second time. I also tried to duplicate some shots now that I have my DSLR...just for gits and shiggles (take that spellchecker)...and found it fun to do.
7 years ago. | Permalink

Tacheles
How beautiful.
7 years ago. | Permalink

A very good effort at matching, Janet. Of the two I prefer the greener one. Seen in www.ipernity.com/group/prime-lenses.
7 years ago. | Permalink

Superb work, Janet. Great light and drop down gorgeous red. I think I slightly prefer yestaerday's version but they're both brilliant.
Enjoy your Sunday.
7 years ago. | Permalink

It's gorgeous, and I love your comment along with the aptly chosen Warhol quotation.
7 years ago. | Permalink

WOW What a stunner. Fantastic image and you did it total justice. Great POV. Well done Janet. Hugs Tess.
7 years ago. | Permalink

the red and green makes it! the bokeh is fantastic. the idea to duplicate a shot is very interesting! - didn't try this ever, but I think its some kind of mission impossible. I have to admit, that you did the job really great. I personally prefer the shot in the insert, especially because of the warmer, more yellowish light. but both are wonderful!!
7 years ago. | Permalink

in answer to your question, actually I prefer the one in the notes!
but both are lovely
7 years ago. | Permalink

Beautiuful daisy, the colors and light are so lovely!
7 years ago. | Permalink

Love the light !
7 years ago. | Permalink

so beautiful and shiny!
7 years ago. | Permalink

Magnificent......just magnificent! Such glorious colours. Of the two, I think I prefer your original version for it's smoother bokeh :)
7 years ago. | Permalink

Love how this stands out against the perfect out-of-focus backdrop. Exquisite light and the colour really 'pops'. Inspirational composition and a fave for sure, Janet.
7 years ago. | Permalink

Radiant with beauty and light ..!
7 years ago. | Permalink

Seen and admired in : 15 and more Faves
7 years ago. | Permalink

again me!
7 years ago. Translate | Permalink

Superb! Love the colors, focus and light and the great quote as well. Seen and admired in www.ipernity.com/group/29755
7 years ago. | Permalink