214/365: "It is the harmony of the diverse parts, their symmetry, their happy balance; it is all that introduces order, gives unity, that permits us to see clearly and to comprehend at once both the ensemble and the details." ~ Henri Poincare 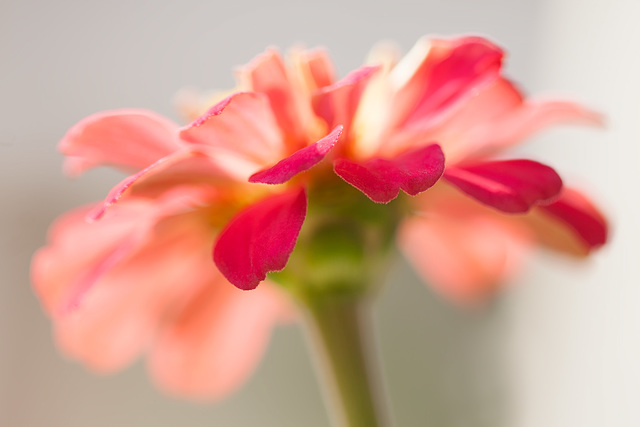 2 more pictures in notes above! :)

A few days ago, I brought home a bunch of flower plants for my garden to have a few more colorful subjects to photograph, but also, because I love flowers!

I was planning to put them in my little garden, but the morning I was going to plant them, I discovered that some deer came through during the night and ate my new echinacea and strawberry plant. We bought a special sprayer that detects motion to scare the animals away, but sadly, it's not working very well. On top of that, there isn't anything for the deer to eat around here now and they are desperate enough that water spraying at them isn't deterring them anymore.

After I got over being infuriated and upset (and yet, I truly can't blame them), I found some planters I'd used years ago, filled them with dirt and planted my new flowers, placing both oblog planters on our front porch where the deer can't get at them. Well ok, they COULD get to them but they'd have to walk ONTO the porch. Steve thinks they might. I really doubt it. Too confining. Let's hope they don't!

This is a beautiful Zinnia! I got a six-pack of them in assorted colors, and this one is so beautiful in hot pink! I thought it would be fun to focus on a few of the petals to see what the effect would look like, and when I showed my husband, he told me that it MUST be my pick of the day! :D Who am I to argue? :)

Jules Henri Poincaré (29 April 1854 – 17 July 1912) was a French mathematician, theoretical physicist, engineer, and a philosopher of science. He is often described as a polymath, and in mathematics as The Last Universalist, since he excelled in all fields of the discipline as it existed during his lifetime. Henri Poincaré

Suggested groups:
38 comments - The latest ones

oh this is sooo beautiful
aNNNNd
you included a snack!
7 years ago. | Permalink

Another beauty Janet love the delicate feel and Dof .
7 years ago. | Permalink

Gorgeous floral view! I love the detail and the way the flower petals fade into bokeh!
7 years ago. | Permalink

Stunning image, Janet. Great use of DOF and the colours are just amazing. Excellent work.
7 years ago. | Permalink

Great example of how the simple things can overwhelm. Great shot!
7 years ago. | Permalink

An enchanting shot, Janet! Great composition and color.
Have a superb Saturday!

P.S. Is there a help file somewhere that discusses how to insert links in photos like
the ones you have in your photo? Thanks.
7 years ago. | Permalink
Jim Boynton
has replied to Barra1man

If you click on Janet's articles page she has provided the best instructions on how to do this. Sorry to butt in Janet.
7 years ago. | Permalink
Janet Brien club
has replied to Jim Boynton

No worries! Thank you for stepping in, fine sir! :)
7 years ago. | Permalink

Stunning Beauty~!
I found this Beautiful Gem in the group "FotoArtCircle - the miraculous world - wundersame
7 years ago. | Permalink

I love your stories and your selection of photos. Always so beautifully taken too.
7 years ago. | Permalink

Sometimes I almost like your quotes nearly as much as your photographs. Almost, but not quite. Beautiful colors and use of selective focus in this.
In the wonderful Pacific Northwest, those cute, elegant, graceful deer are MAJOR pests. I tried rotating propellers, automatic noisemakers, coyote urine ... the only thing that really works is a strong fence.
7 years ago. | Permalink

Soft and yet has Fizz !! if you see what I mean ! Beautiful !

We have ... deer... raccoons(those little hands) "a big cat" (rarely visits.. and yes.. bigger than a bobcat !) ants grasshopper... grasshoppers.... did I mention grasshopper(ggggrrrr yet another hibiscus flower gone to them !) Everything comes and nibbles. cant blame them.. I put lots of food out.. and the magic thing.. water.

I have rather given up... the drought killed prime trees and many plants... the animals may as well have the rest !
7 years ago. | Permalink