A traveller with a Tibetan hair in Diskit, Ladakh Misleading signboard at the Khardungla Pass Passing to the South Himalaya/Caravan julley! Amiga, la Luna Pinky way Sun-lit day Dusty path You cannot beat these mountains, even if you pay g… Me, my hills and ice I embrace it all We deserve the rest, indeed we do... Crazily nice here, I know why I prefer mountains t… Leaving Markha Auuuuuum, for every soul in the valley Such view, never will be boring Beauty does not lie in the eye A consumer? Trinity Let's go Party, Budda Castle or Monastery? My Friend, the Moon Markha Valley Queue for the snowy pass A Heaven or a Hell? In a miracle country, Leh Game of the Colours & Light 20150822-DSC00752 Crazy Sky over Leh What the Gods consume... Rainbow out of the Blue Leh gives green light to panoramas Legs up, relax! Lehnorama 14280029 14280028 14280027 I know him Semi, only Om-y-fast-food Co-passengers Little Bear, enjoy the ride Cooking overseen by mighty Shiva 14280015 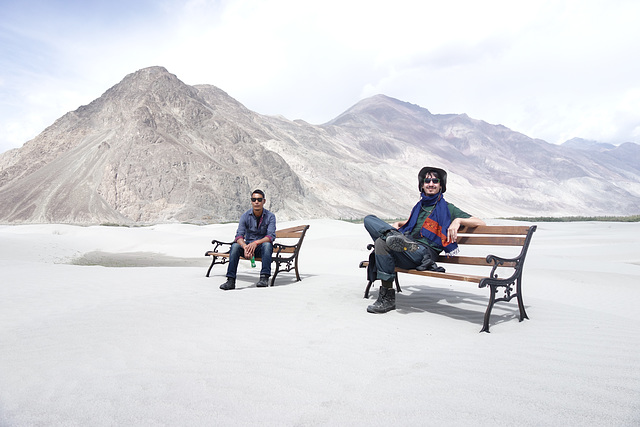 Nubra is a tri-armed valley located to the north east of Ladakh valley. Diskit the capital of Nubra is about 150 km north from Leh town, the capital of Ladakh district, India. Local scholars say that its original name was Ldumra (the valley of flowers). The Shyok River meets the Nubra or Siachan River to form a large valley that separates the Ladakh and Karakoram Ranges. The Shyok river is a tributary of the Indus river. The average altitude of the valley is about 10,000 ft. i.e. 3048 metres above the sea level. The common way to access this valley is to travel over the Khardung La pass from Leh town.

On the Shyok (pronounced Shayok) River, the main village, Diskit, is home to the dramatically positioned Diskit Monastery which is built in 1420 AD. Hundar was the capital of the erstwhile Nubra kingdom in the 17th century, and is home to the Chamba Gompa. Between Hundar and Diskit lie several kilometres of sand dunes, and (two-humped) bactrian camels graze in the neighbouring "forests" of seabuckthorn.

Liliane LR, Annemarie, Berny, malona and 8 other people have particularly liked this photo

:D doesn't really look like real, what do you think :D
6 years ago. | Permalink

Looks terrific!
Is it real or is it a montage?
7 months ago. | Permalink
ɱ ƕ club
has replied to Berny club

Dear Berny, I can assure you this is a genuine photograph.
7 months ago. | Permalink
Berny club
has replied to ɱ ƕ club

I wondered who the hell put these benches there ;-)) You made a fantastic jorney there in 2015. Thank you!
7 months ago. | Permalink
ɱ ƕ club
has replied to Berny club

My experience that you get surprises anywhere you go in India, at the "ends" of the world there are always people, and for the sake of tourism they provide different services - often simple and organised on grassroot level. Up to this place Bactrian camels were brought from Mongolia, so evidently the tourism and travel were here hot back in those days
7 months ago. Edited 7 months ago. | Permalink

Outstanding light and a fabulous image!

Thank you for posting in the group
www.ipernity.com/group/magicalsunlight
7 months ago. | Permalink