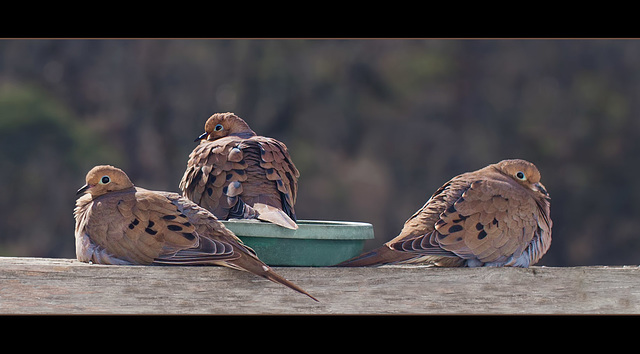 It was another freezing cold day today, and I decided to stick close to the house because I'm a big baby and didn't want to "die of frostbite" again like yesterday! :D

Stepping out onto the front porch, I saw that the flowers growing in two planters are now seriously on their way out because of the frost. But that doesn't mean they aren't still beautiful! :D So I spent some time taking pictures until my fingers and toes started yelling at me to go back inside! :) (You'll find two pictures after this one to show my picks!)

I went into the kitchen and looked out onto our back deck, and what did I see but the adorable sight before you! Three extremely fluffy mourning doves, huddled up around a water dish (formerly a pot saucer). Now, if you know anything about me, you'll know that I simply go crazy whenever I see a bird with fluffed-up feathers! Here we have THREE!!! When they didn't fly away after a minute of me cooing at them, I ran for my camera and they were quite happy to sit and pose for me as I got pictures through the window! :)

Doves are one of the most recognized symbols of peace. They also symbolize love and are a symbol for messengers. You can find out more about the dove as a symbol on this Wiki page: Wikipedia: Doves as symbols

Hey lucky Janet, what a beautiful composition the doves made for you - sitting peacefully there and looking (all three!!!!) into the camera. GREAT
8 years ago. | Permalink

What lovely, little birds! This is a very attractive image!
8 years ago. | Permalink

50 years later, I fear we have slid back on progress made and Camelot's vision. Like these doves, we turn our backs on each other. Good to remind ourselves what we could be.

Love the doves & the bokeh! Maybe they are just keeping watch in all directions.

one big difference between flickr & ipernity: Flickr shows portrait orientation at a disadvantage--especially in group pages--ipernity does the opposite!
8 years ago. | Permalink

Oh Janet this is a gorgeous photo. Their plummage is so lovely and all fluffed up
8 years ago. | Permalink

Such a beautiful trio of doves...............I love the way that they've composed themselves - almost as if they knew you'd be taking a photograph of them!
8 years ago. | Permalink

I love it when they are all fluffed out!
8 years ago. | Permalink

theses are gorgeous birdy's Janet, love the markings on their feathers.
8 years ago. | Permalink

That is a really sweet shot. Well spotted and well photographed, Janet.
8 years ago. | Permalink

I agree with JFK, and for me, not only peace, but love, happiness, every good thing in life is a matter of construction.
Believe, the bad ones too.
Sometimes, (almost all them) even sickness.
But I came here to appreciate your beautiful shot.
Really tender, sweet and fantastic.
Hugs and I wish you a great and "warm" weekend.
(at the moment, we have 32° in Brasil).
;-))
8 years ago. | Permalink

Peaceful indeed.... thank you for the nice words as well!

The Artisan!!
8 years ago. | Permalink


Of course seen in “The MUSEUM”
8 years ago. | Permalink

A terrific shot, Janet! Great composition and detail.
Have a splendid Saturday!

Seen and Appreciated in From (T)here to Ipernity.
8 years ago. | Permalink

I have a permenant family of them here..
8 years ago. | Permalink