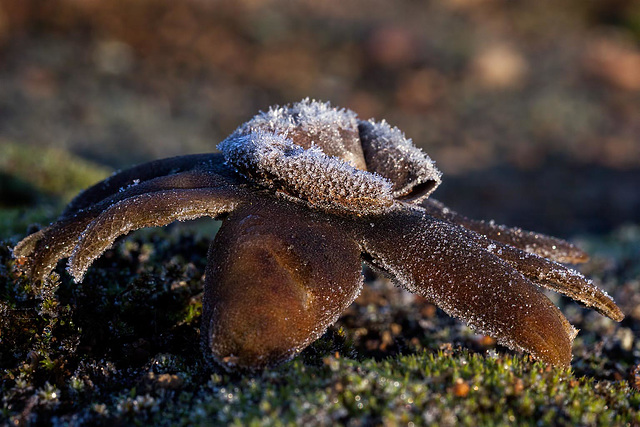 This year I really noticed that it's been warmer, and I kept waiting for frosty days to arrive and they just didn't. We got some very early morning frost on a couple of days but it melted quickly, and then nothing at all. Last night it was finally extremely cold and I could tell it would be frosty today. When I got up, I looked outside, and the world was twinkling with sugar coating everything! Hooray!!! (I was amazed to find out that the last day Medford, Oregon's weather has recorded frost was March 24. That's 240 days, the longest nonfreezing period since the weather service started keeping Medford records in 1911! And the last record was LAST YEAR, which was 230 days...can you say global warming? *sigh*...)

I bundled up in my warmest sweaters and a coat, donned a hat and pulled rubber boots on over my thickest socks, and out I went like a kid running into a candy store! Where do I start? Everything is so gloriously sparkly!!!

Crunching gleefully over the frosted grass, I began heading for a metal fence, since those are always such fun to capture frost on. But of course I was stopped in my tracks by a beautiful frosted mushroom. Walking past the oak tree in the meadow, I stopped to take a picture as it stood cloaked in the frosty fog, so beautiful. (see the inset above) Then I captured some leaves bristling with frosty crystals, and finally meandered over to the fence. No more frost, but no worries, because I spotted some frosty nails that I couldn't resist! Then I looked up and saw the moon, and got a picture of that too! I heard some geese fly by quite close by, and readied my camera, but never did see them in all the mist!

I decided it was time to head back, though truthfully, it was my frosted toes that made that decision! As I began walking back, I looked down and found a great prize! One of nature's most unusual fungus species happens to grow on our property, and it's called an earthstar! Related to a puffball and round when first growing, the outer layer opens up and splits, creating the "legs" you see, which eventually raise the puffball-spore sac above the ground to help disperse the spores when it opens! Is that cool or what?!

I carried it over to some moss and was pleased to get frosty images of this interesting fungus for my Picture of the Day! Finally, as I was walking back, I found another pair of frosty mushrooms that I'm also sharing a picture of tonight!

William Shakespeare (26 April 1564 (baptised) – 23 April 1616) was an English poet and playwright, widely regarded as the greatest writer in the English language and the world's pre-eminent dramatist. He is often called England's national poet and the "Bard of Avon". His extant works, including some collaborations, consist of about 38 plays, 154 sonnets, two long narrative poems, and a few other verses, the authorship of some of which is uncertain. His plays have been translated into every major living language and are performed more often than those of any other playwright. Wikipedia: William Shakespeare

Petar Bojić, , Geneviève Teyssier, TKJ1966 and 40 other people have particularly liked this photo

I love frost and ice on things too ! As long as the ice isnt smashing everything to pieces !

LOVE this Earthstar !
8 years ago. | Permalink

how so so beautiful this frosted leaf? mushroom?
happy weekend
8 years ago. | Permalink

Thanks for these amazing pictures and text. Your stream is exciting and very beautiful!
8 years ago. | Permalink

Superb series of frosted images! They are all incredibly beautiful !!
Have a great upcoming weekend, Janet!

Seen and admired in : : Ipernity Addicts
8 years ago. | Permalink

First time that I see one and what an excellent capture. Thank you for sharing the info as well.
8 years ago. | Permalink

Such lovely words with this fab picture. I felt I was there with you :)
8 years ago. | Permalink

This is yet another fabulous picture - I've never seen this flower before.
8 years ago. | Permalink

Great and amazing close up!
8 years ago. | Permalink

A lovely series, they look as if made of chocolate and sugar and spice!
8 years ago. | Permalink

And here it is.
More of them, so different and "charming!"
You got fantastic details.
A really amazing shot.
8 years ago. | Permalink

Janet, your enthusiasm is so infectious! You make me want to get out and capture the small things. This is a great shot!
8 years ago. | Permalink

What a great find, another unique photograph!
8 years ago. | Permalink