My local park and a trumpet vine that needs a bit… HFF everyone! Green. H. A. N. W. E. everyone! Steam engine or traction engine (I know someone wi… Castellana 77. Azca Business Centre, Madrid. The back of a Hamilton Standard propeller from a D… Ralph's Cupboard, Cornwall Another one lurking in the grounds of Nuevos Minis… HFF everyone. Along the ridge. La Sierra de La Cabrera. H. A. N.… Hospital de Maudes Newdown's Head, St Agnes, Cornwall Buitrago de Lozoya, old walls and gateway. A house I would love to live in. No idea. Anyone know what this is? HFF Everyone! H. A. N. W. E. everybody. San Lorenzo de El Escori… My local park. Plaza de Olavide, Madrid Granite country A quiet corner Zennor Spot the fence. No prizes; just for fun! Parque del Oeste, Madrid Templo de Debod. Las Agujas del Cancho Gordo. H. A. N. W. E. everyone! HFF number 2. HFF number one today (HFF number two tomorrow morn… August 2019, and setting up for the night's fiesta… Man and his Man, or Bawden Rocks, or Cow and Calf. A special building to me, and a tale. Little local parish church spotted on a walk. Mushroom Rock again! I missed roses at their peak this year but just ca… HFF everyone. (better on full screen). The Retiro park re-opened a week or so ago. Another from the Estadio Santiago Bernabéu, Real M… Godrevy Spookily quiet! Paseo de La Castellana - no traffi… I always liked this modern building at 46 Paseo de… H. A. N. W. E. everyone! HFF everyone. Estadio Santiago Bernabéu Above the fog. A fog which, incidentally, covered… 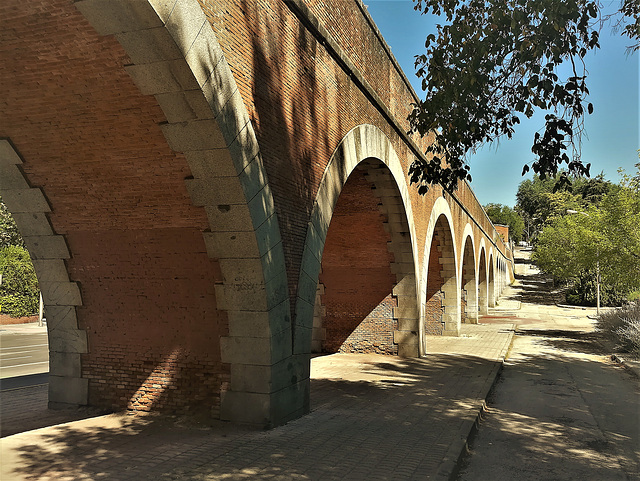 Well its obviously a bridge of some sort in Bellas Vistas, Madrid and I came across it on a walk today. It nagged me that I felt sure I had seen it before and that I knew what it was but had forgotten how, why or when!
Well later today I remembered. I had seen it before but from up a tower block where I gave a few classes some years ago. From the student's window it was quite clearly used at one time for carrying a track of some kind but now all there was to see was grass growing there. I asked my student who explained it was part of Madrid's long defunct tramway system!
I was pleased that my annoying mental itch earlier in the day had been gently scratched away!
Having said all that, I have just seen from Google Maps that its called Aquaducto de Amaniel!
So I am again none the wiser!

A former guest member wrote; Thank you for showing this interesting bridge. I tried to find some information, and on
structurae.net/de/bauwerke/amaniel-aquaedukt
they say that it is an active aqueduct. The site has been updated a last time actually in 2018 and they show two photos.
As I do not know so much spanish, I was not able to collect much information, but for example
www.exclusivasimanara.com/blog/galeria/374-el-acueducto-de-amaniel-en-1857
seems to say something similar.
I was not able to find information in connection with a tramway, but at
www.iagua.es/noticias/ayuntamiento-madrid/ayuntamiento-madrid-recupera-tramo-historico-viaje-agua-amaniel
the spanish word "tramo" is being used which might have been misunderstood. I would suppose, in this text, "tramo" stands for construction section (Bauabschnitt, in german)
At
commons.wikimedia.org/wiki/Category:Acueducto_de_Amaniel
they show several photos of it, but I do not find a verbal explication at wikipedia sites.
Best wishes and have a great day
CC BY-NC-ND 3.0 Andy Rodker What is (was) this?

Nicole,
Boro,
Many thanks to you both!
18 months ago. | Permalink

It's a beautiful bridge and I love the shadows. I hate it when I forget things like that. And I forget words too. I gather it's nothing to worry about if you remember them later but it is irritating.
18 months ago. | Permalink
Andy Rodker club
has replied to Jean

Nice combination of brick and stone to these lovely arches Andy, I do like the shadows and the angle of your shot.
18 months ago. | Permalink
Andy Rodker club
has replied to Roger (Grisly) club

Kind of you! Thank you, Roger!
18 months ago. | Permalink

A great composition Andy, may be the tramway will make a comeback, Birmingham are spending vast amounts on extending theirs, I'm surprised it wasn't turned into a walkway. Was there a Spanish equivalent of Dr. Beeching? what an idiot he turned out to be
18 months ago. Edited 18 months ago. | Permalink
Andy Rodker club
has replied to Peter Castell club

From what I remember of my view from above is that it really is in too much rack and ruin to be used as a walkway and most of the tram system followed current roads so it wouldn't have worked.
I bet this has been scheduled for demolishion for years but it probably wasn't economically viable to do so. Maybe the last recesson scuppered its destruction; the current one about to slam into us will certainly leave it be!
18 months ago. | Permalink

Well I can understand the "itch" you had and from this angle you couldn't possibly know what it was used for. So it used to be a tramway - it's a beautifully built bridge nevertheless.
18 months ago. | Permalink
Andy Rodker club
has replied to Jenny McIntyre club

Agreed, José Manuel. Of course there must have been an arroyo here but whether it dried up 10,000 years ago or with the general lowering of the water table as Madrid expanded ... I don't know!
18 months ago. | Permalink

Google Street Maps showed me just now that its name is Aqueducto de Amaniel! I am back to the starting point of knowing nothing!
18 months ago. | Permalink

Thank you,
Peter and Fred!
18 months ago. | Permalink

Very nice shaded perspective on this quite charming bridge, Andy.
And again a story that makes us look at it with a smile ;)
18 months ago. | Permalink

It may have been an aqueduct before it was a tramway. Whatever, it's a nice piece of architecture, Andy.
18 months ago. | Permalink

Very nice perspective with this fine diagonal. And an interesting text ! Good Morning, Andy ! Have a good Wednesday !
18 months ago. | Permalink

A masterpiece, Andy! ;)
Seriously, not only the bridge is an architectural gem,
but the perspective you choose makes the image a masterpiece too.
18 months ago. | Permalink

Beautiful perspective and construction and I supposed it to be some kind of railway bridge!
18 months ago. | Permalink

I did a bit of research as well Andy..............and turned up this: cityofmadridfilmoffice.com/en/localizacion/amaniel-aqueduct from the City of Madrid Film Office. It seems it was almost certainly an aquaduct.

I'm guessing that it was once scouted for a film location?

A lovely photo by the way............it looks splendid in the sunshine!
18 months ago. | Permalink
Berny club
has replied to Keith Burton club

Great find, Keith! Thank you for the research!
I still have the contact details for my student who wrongly advised me that it was part of the old Madrid tramway network. Should I contact him and put him right?
Or should I let sleeping dogs lie?)
18 months ago. | Permalink
Keith Burton club
has replied to Andy Rodker club

I'd tell him, he'll appreciate your candidness, but thank him for trying to help :-)
18 months ago. | Permalink
Andy Rodker club
has replied to Keith Burton club

Have done so, Keith.
Not only did he thank me for putting him right but he has asked to resume classes as from next week (4 years after our last class!!)
I presume you would like your ticket clipped, Keith!
18 months ago. | Permalink
Keith Burton club
has replied to Andy Rodker club

It is a really wonderful shot of this beautiful bridge!!
First I thought it is a railway bridge. Then I understood "Aquaducto de Amaniel" is a aqueduct...
Thank you for the nice sharing!
Also thanks for these useful links, to Wolfgang W.W, and to Keith Burton.

Thank you Füsun!
I was confused at first, then thought I had the answer but now really do have it, thankd to Keith and Wolfgang!
18 months ago. | Permalink

Good shot from this perspective Andy and a good explanation. Don't worry too much about forgetting. It happens to all of us ;-))
18 months ago. | Permalink
Andy Rodker club
has replied to Rosalyn Hilborne club

Thank you Rosa. Did you see José Manuels research and links with great photos; it's worth a look!
18 months ago. | Permalink

I spent a while looking at this on Google. My opinion is that is could never have been for a tramway it is too narrow.
English aquaducts (eg Pont Cysyllte)are purposely built just slightly wider than the standard narrow boat. The water flow around the bows then guides it down the middle, so it never hits the sides! No doubt the Spanish knew this too...

Yes, I've been corrected already. If I had the contact details of my old student who lived nearby and misinformed me, I would put him right. Alas, I don't!
I saw the Google info and it's all interesting and your added info helps build a more accurate complete picture, Peter
Thank you and best wishes,
Andy
18 months ago. | Permalink

It looks like the green coulée of Bastille south of Paris that you might know.
This pretty light, more spring-like than summery, gives it a really pretty perspective.
18 months ago. | Permalink
Andy Rodker club
has replied to Eric Desjours club

Thank you, Eric.
The light? ... maybe reduced traffic on the roads and less polution.
I don't know Paris at all well, Eric. One school trip for a week, camping in the Bois de Boulogne in 1975 (great fun!) and a quick 2 day visit with my French exchange partner and his family at their Paris flat in Creteuil near Paris in 1977. But both visits made a great impression. I know Lyon much much better!
18 months ago. Edited 18 months ago. | Permalink

Yes, all has been clarified, Roland! My student who wrongly informed me, was either ignorant or he was joking; I can't decide which!
18 months ago. | Permalink