Part 8c—Dreams of a Big Flower Garden, 1-Month Update: The Ugly - The bugs and critters have discovered my seedlings and they are laying waste to many of my precious… - June 11, 2014
See all articles...

Part 9—Dreams of a Big Flower Garden: We Have A Pumpkin Patch!!

June 11, 2014 - 6 comments
Steve and I have wanted to grow pumpkins and gourds ever since we moved to southern Oregon, but something always got in the way. This year I finally got started at the right time and with Steve's help, we have a pumpkin patch! 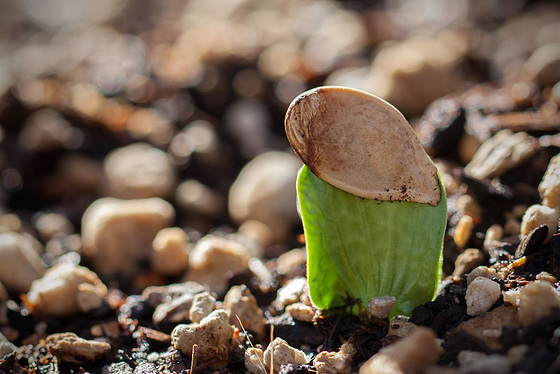 This pumpkin seedling sprouted a few days ago in our brand new pumpkin patch! There are now 11 seedlings as of June 11th, and I am sure there will be more!

I'm not one to dip a toe in when I do things—I jump right in with all guns a'blazin'! So when I decided I wanted to have a raised bed garden this year, I had other plans I wanted to enact as well. One of them was making an herb garden. The other was making a pumpkin patch.


Limited Space for a Pumpkin Patch? Make it Vertical!
Steve and I are crazy about pumpkins and gourds. All the colors, shapes and sizes are such fun that we wanted to try growing several different kinds. However, my space was limited, roughly 3 feet by about 20 feet. That really isn't much room when we're talking about these space-hogging plants. The vines sprawl all over the place and they have very large leaves. I did some looking around online and discovered that pumpkin vines can be trained to climb a trellis. A strong structure is necessary to support the pumpkins, but armed with this knowledge, I had a plan. 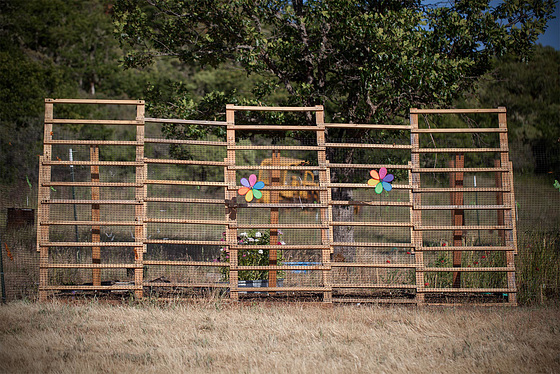 This is the finished vertical pumpkin trellis that Steve built for me. The pinwheels make a sound as they spin and we hope this will discourage the deer from trying to sample the pumpkin leaves as they begin to grow. (If you look behind the trellis, you will see my metal planter with the Sweet William flowers in it, and on the right, you can just make out some poppies in my front garden! The herb garden is on the left but the seedlings are too small to see at this angle.)


Pallets Make Great Trellises!
I originally thought about a few old pallets we had that are pretty broken down and ruined, but when I talked to Steve about this project, he suggested that we use some pallets we had in storage that were in perfect shape. He was very happy to help and after I showed him the pictures online so he could see what other people have done, we decided on a design that sounded strong and space-efficient.

The following weekend, we got some of the pallets, removed the extra slats, and attached two pallets vertically and created three sets. We then took the extra slats and attached them in-between the stacked pallets to lengthen the horizontal size. The whole structure leans at about 70° degrees, supported by three 2 x 4's. This will allow us to train the vines up the trellis with plenty of support for hanging pumpkins and gourds. For individual support of growing pumpkins, we'll slip panty hose around each one and tie the hose to the trellis. Panty hose can also be used for slings in case the pumpkins get too big. We can't wait for the vines to start growing!! 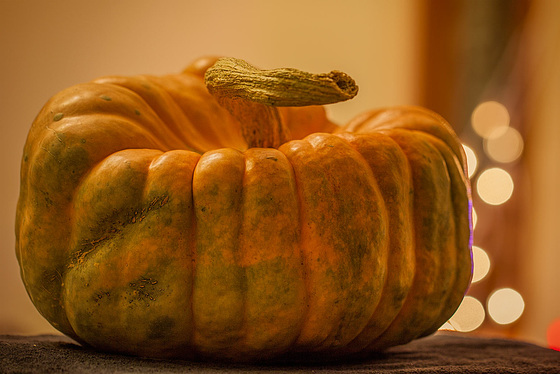 This is a pumpkin that Steve bought for me last October. It sat on our counter until just the other day when I cut it open to get some seeds from it. I dried the seeds over 5 days and then planted them into the pumpkin patch. Will they grow? I don't know. If they do, will they look anything like this specialty hybrid pumpkin? Almost certainly they will not. But there's a chance, and even if they are just "normal" pumpkins, we'll be delighted!

Old Seed and New: If They All Sprout, We'll Have to Move!
I had many packets of various pumpkin and gourd seeds that I'd bought in 2007, and I didn't know if they were still viable, so I scarified them (sanded the edges of the seeds just until the hull is breached), soaked them overnight, and sat them under wet paper towels for several days to see if any of them would sprout. Not a single one did, but just in case, I planted all of them (many dozens of seeds—way, way too many) in the hopes that maybe one or two would sprout. The truth is that the time for pumpkin and gourd seeds to germinate is between 6 and 10 days, so it's possible that there will be a mountain of seedlings sprouting in the next few days. If that happens, we may need to move to the next county over! :D

When none of the seeds showed any life, we went out and bought several different kinds of pumpkin and gourd seeds: regular orange pumpkins, white ones, little ones, mixed gourds and "birdhouse" gourds. I also cut open a pumpkin that we'd had sitting on the counter since October, dried some seeds over a week, and planted them along with the new seeds. Since I didn't think any of the old seeds would germinate, I planted them without any labeling, but all of the new seeds have little numbered tags wherever I planted them so we know what they'll be when (or if) they sprout.

The Party Has Started!
The first seeds began popping up a few days ago, and these are definitely from the dozens of seeds I planted all over with the expectation that none would grow! They are all the same type, a white-colored pumpkin seed, but I planted several pumpkin and gourds which had that color, so I really don't know if they are the same kind or not. It's going to be fun to discover what they turn into! In the meantime, there should be about 10-15 more seeds popping from those we purchased last weekend.

6 comments - The latest ones

I have had zero luck with new seed gourds 2 years running !!
7 years ago. | Permalink

Great fun to have them and they are very decorative. I remember first time I saw Pumpkins growing was in Korea where they train the vines to grow over the roofs of their houses in the country farming villages.

Remember to make a place for "Charlie Brown" to come in and sit.

Wow you are really getting into this gardening stuff. Mandi has pumpkins, melons, marrows etc growing in her garden in Turkey. Her hubby is getting them going and she'll have to be there to cultivate them and swap some with other peoples' crops so everyone has something they want
7 years ago. Translate | Permalink

very inventive with the trestle I hope you get a good crop
7 years ago. | Permalink

How exciting ! I love gourds too - such a beautiful range of shapes and colours. I look forward to seeing the results !
6 years ago. | Permalink