Part 9—Dreams of a Big Flower Garden: We Have A Pumpkin Patch!! - Steve and I have wanted to grow pumpkins and gourds ever since we moved to southern Oregon, but some… - June 11, 2014
See all articles... 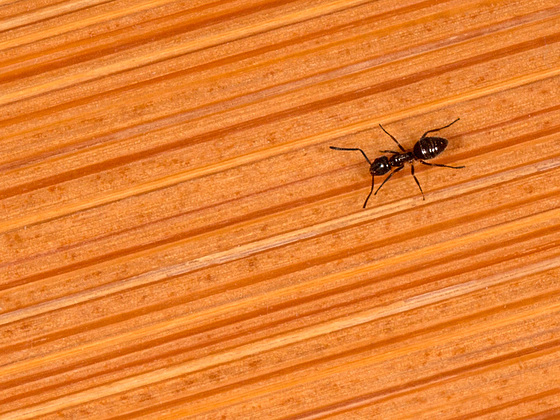 This is one of the rice-sized black ants that infested our house, shown here on our bamboo floor.

When I began planning my garden, I knew there would be issues with the local wildlife. But I was simply not prepared for the scope of attacks coming in on all sides. First there were fungus gnats killing my indoor-started seedlings.Then there were insects gobbling up my newly sprouted seedlings in the garden. Soon after, the ground squirrels began digging up and wolfing down my iris corms, eating my bachelor button plants and making holes in my front garden fence and tunneling into my raised bed. If that wasn't enough, our cherry tomatoes were getting eaten by a ravenous bird, who soon began pecking holes into our larger tomatoes that were turning red.

About that time, it started getting very hot in our area, and that's when we noticed a few ants on our kitchen counter. We wiped them away and made sure to keep the counters clean. Within days, we found more ants, and if ever there was a speck of food, there would be a bunch of ants around it. We started using insect spray, creating barriers of cinnamon, and continuing to clean up carefully. Studying their trails, we discovered that they were coming from under the house, from entry points that we could not close off to them. If we stopped them from one spot, they would soon appear in another place. Oddly enough, they seemed to be coming up from cracks beside our dishwasher, where they would crawl inside and eat the washed off specks of food, and from there would then climb up to our counter and look for more.

We got some Raid Ant Bait Traps and put them directly in their paths. They pointed and laughed and strolled around the bait stations singing merry songs about dumb humans.

We got Terro Ant Bait that you sprinkle from a large bag around the perimeter of the house and water to activate. They howled in glee and played soccer with the granules of poison.

Some of them even braved the caustic cinnamon barriers and I think it was one of their rites, something like walking on a bed of coal.

We glared, they gloated. We smashed them, washed them away, sprayed poison on them. For every one that we killed, 5 more took their place.

Because we weren't able to stop them, their population grew, and they invaded almost every room in our house. They found our parrot's bowl of fruits and vegetables which is her most important food, and we were forced to put her cage on a stand where they could not get to her. They found the bag of dry dog food and we had to wash the floor in vinagar every day and move the bag to different spots to keep them from finding it. They got into the pantry--into the "sealed" bag of sugar. The brown sugar. The honey. Into cereal, baking chocolate, jello containers.

They found our newly baked goods we hid in the cupboard, swarming over the scones and making us seethe in anger. In desperation, we cooled our baked goods upstairs in the bathroom. They found our secret spot in a day and crawled all over our newly baked cookies. One morning I awoke and entered the bathroom to wash my face. I noticed that I'd forgotten to bring some dishes downstairs that I'd placed on the counter. They were covered with swarming ants.

Our computer room was invaded and we had to hold our plates to keep them free of scouting ants. They came up through the carpet, from the holes in the walls that we could not find. I tried moving my food to different spots, but no matter where I put a plate, ants would find it if I didn't move it to a new spot fast enough. One night I put my finished and clean plate inside my ant-free garbage can, meaning to take it downstairs before bed, and promptly forgot about it. The next morning I came in and found a sea of ants all over the plate that didn't even have food on it.

It was absolute madness. We were at our wit's end. I was considering the price of nuclear explosives but thought the ants would just brush the ashes off and look for leftovers once the dust settled.

I mentioned to an ipernity friend, Lynne, that we were losing our minds over ants, and she told me about some ant bait that worked for her. Since she lived in Australia, I looked online to see if there was any kind of ant bait in the United States that had good reviews, and discovered one that was very popular. Oddly enough, Terro Liquid Ant Baits is made by the same company which made the bag of sprinkled ant bait that didn't work at all. However, with such great reviews, we were willing to give it a try.

Steve brought some home after work and with crossed fingers, we put the bait stations around in the places they were most active, and within minutes of setting up the first one we noticed tiny neon signs popping up outside each one saying, "24/7* Rave Party** with all you can eat buffet and jello shooters*** on the house, come on in!" We put two and then three INSIDE the dishwasher, two in the downstairs bathroom, two on the upstairs deck and two in my trash can next to my computer...for hours and hours, far into the night and for the next two days the music was thumping, the light shows were flashing from inside the clubs, the neighbors complained about the noise, and we couldn't believe what party animals those ants were! They had solid conga lines going from every rave club and disappearing into the cracks to their nest!

After a day, the masses of party-crazed ants were finally starting to slow down. Why, they just weren't feeling quite right. Was it the jello shooters? Or maybe one too many designer drugs in their systems? They weren't sure, but it was time to lay down and get some sleep. Some solid, PERMANENT sleep. Someone turned off the music. Someone else turned off all the flashing lights. The rave clubs were shutting down because, gosh, there weren't any more ants coming to party.

We could not be happier. Good riddance and may you never show your faces here again, you horrible, nasty little ants!!

*24/7: 24 hours a day, 7 days a week
** Rave party: a large party or festival featuring performances by disc jockeys and usually electronic, trance-type music and lots of drug use, especially ecstasy and other psychotropic enhancers.
***jello shooters: jello made with vodka

13 comments - The latest ones

You write so amusing. If you did not know better. You'd think the ants have become good friends. A wonderful article!
6 years ago. | Permalink

Well captured "Raver" as cover pic.
Wonderfully written article Janet.
Must be great to have such a sense of Humour.
6 years ago. | Permalink

Anti.
I do not like my visitors;
they help themselves to food.
When I find them visiting
they put me in a mood.
These wholly uninvited guests
bring their relations too,
making me feel anti....well
they'd do the same to you.
I know they're very busy;
I'm sure they mean no harm,
but when they come to visit
those ants fill me with alarm.
6 years ago. | Permalink

I have a friend who is an entomologist for the Army and her advice to me was never to use sprays as that just makes them spread out the colony more. Instead, always use baits that the scouts can bring back to the colony and kill it. I've followed her advice for years now and our ant problems are minimal.
6 years ago. | Permalink

Fortunately the ants here - and there are plenty of them - prefer to stay outside, farming aphids! :-)
6 years ago. | Permalink

I just love this article - you write so amusingly - and I should imagine it's how you talk. So much fun and I was able to imagine the ants having a party. Seriously though it must have been horrendous being invaded like that so am glad that you seem to be conquering the problem.
6 years ago. | Permalink

Thanks to all of your for the wonderful comments, and Eunice, for your fantastic poetry! If you can believe it, there is a second wave of ants coming in, but very few in comparison, and they are gobbling up the ant bait, so their numbers are dwindling quickly! :)
6 years ago. | Permalink

This reminds me of an ant infestation I had a few years ago. Fortunately, cold weather took care of my problem before it became as big as the problem you've described, and I've been careful that scouter ants don't find any crumbs lying around my house any more. (For the most part, I never learned to cook, so unless I leave snack crumbs lying around, I shouldn't have any recurring problems.) Thanks for the info on the Terro product. Now, if my problem comes back I know what to use. And you have a wonderful writing style! I love it! :)
6 years ago. Edited 6 years ago. | Permalink

Very well written humorous story.
But you don't know, you anthropocentric human, that the whole Universe belongs to ants and was created by an Antomorphic God for the sake of faithful ants. They lost just a battle. Not the war.
6 years ago. Edited 6 years ago. | Permalink

I've heard of a cheap but very effective remedy ; mix sugar with bicarbonate of soda ; the ants love it, really enjoy their last meal, then crawl away bloated and explode (hopefully outside the house!!)
6 years ago. | Permalink

Thank you: I loved it! You are a wonderful story teller as well as a wonderful photographer.
4 years ago. | Permalink

You told us a hot story about ant invasion. Hope you meanwhile had solved the problem ...
2 years ago. | Permalink