Part 6—Dreams of a Big Flower Garden: 2-Week Progress Report and Lots of Baby Pictures! - This beautiful seedling is a King Henry Hollyhock! There are 6 other seedlings and since I took this… - June  3, 2014
See all articles...

Part 7—Dreams of a Big Flower Garden: Steve Wanted an Herb Garden Too...

June  4, 2014 - 19 comments
My husband is an amazing cook and he loves to have fresh herbs when possible. I thought to myself, "How hard could it be to make some room for an herb garden?" 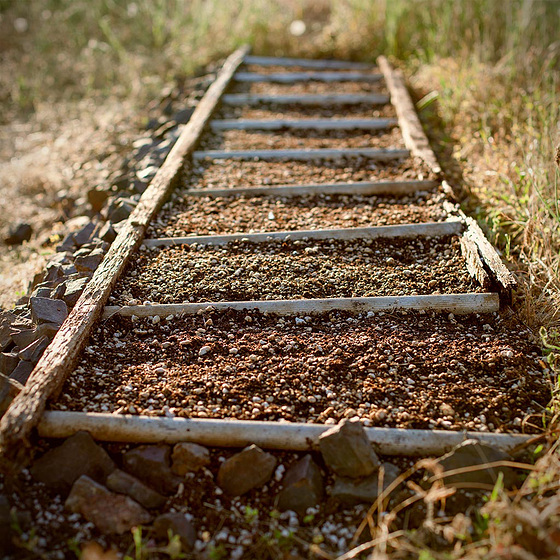 This ladder looks a lot like a train track from this perspective! It may have been falling apart but I think it make a really cool and rustic herb planter.

Fresh herbs for cooking are so nice, aren't they? A few years ago we had a rosemary plant that got quite large, but unfortunately it died from neglect one hot summer. Last year we bought a Basil plant and kept it out with our tomatoes all summer. It was really nice having the fresh leaves available, and we used this plant all the way until autumn.

The other day Steve mentioned that it would be nice to have some a small herb garden, and that's all I needed to hear. I had been reading a gardening book full of ideas, tips and tricks, and saw something that I just loved! You take an old ladder, lay it on the ground, fill the area between the rungs with dirt and turn the whole thing into an herb garden! I instantly remembered the dead ladder we have by our well house.

We have a storage tank for water pumped from our well, and there's a ladder to climb up and check the water level in the tank. Shortly after we moved here about 8 years ago, Steve discovered that the old ladder was rotten and needed to be replaced. It was left on the ground nearby and was slowly covered with weeds and grass over the years. However, the second I read about using a ladder as a planter, I could hardly wait to use the ancient relic in my front garden!

The dogs and I went hunting for the ladder and soon I had it under my arm and marched back to the front garden. I found the perfect spot for it at the back of the front garden, but before I lay it down, I pulled all the weeds out from where it would go. Then I got a bunch of soil to raise the level up by about 6 inches. Carefully laying the ladder on top of the soil. I could see there would be some gaps from the hillside, so I found some rocks to build up the side. Once I was satisfied, I added soil to all of the ladder sections. The next hour was spent conditioning the soil by hand. With a hose in one hand, I used the other to stir and mix every single inch of the dusty, water-repellant potting soil until it was completely wet and soaking up the water as it should. A bit of rinsing and clean up and the bed was ready!

I planted two sections of basil, two of chives, one dill, one spearmint and one of sage. It's been just a few days and the basil is already beginning to sprout, hooray! I'll keep you up to date on how this herb garden does. I know that I've got some perennials in here so we'll see about those, but we'll certainly have basil, spearmint and dill this year! :) (By the way, we have a small rosemary plant in my front garden bed which I got as a seedling last year. It's really starting to take off this year, which is exciting to see, and the flowers are so pretty!) 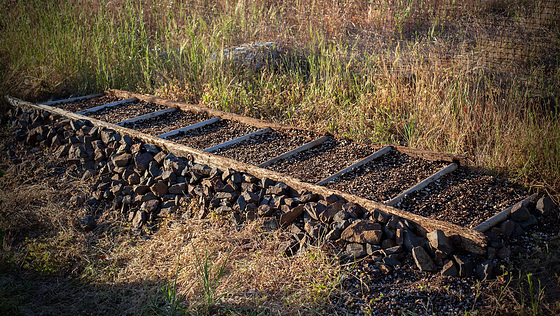 Here's another view of the ladder herb garden, isn't it fun?! :)

Next: Part 8a—Dreams of a Big Flower Garden, 1-Month Update: The Good

My Awake Gottica (m.a.g) has particularly liked this article

19 comments - The latest ones

Great idea and a wonderful way to use a rotting ladder.
Oregano would be in it too if I grew such things.
7 years ago. | Permalink
Janet Brien club
has replied to Stormlizard club

I asked Steve if he wanted oregano but he never uses it, so I didn't get any. I asked him if he was sure, and he really doesn't care about oregano, so there you have it! :)
7 years ago. | Permalink
Stormlizard club
has replied to Janet Brien club

That's life Janet, I use it often with Turkey and Chicken dishes, I also use lots of Garlic, either chopped or sliced, never crushed, I used to grow Garlic on the window ledges and outside.
7 years ago. | Permalink

that is a grand idea it has the look
7 years ago. | Permalink
Janet Brien club
has replied to Mickey fez club

Thanks Mickey! :)
7 years ago. Translate | Permalink

What a brilliant idea Janet to use the ladded [now defunct] as a planter for putting herbs in order. I think you've done a wonderful job and it looks so good. How above chives as well. They are wonderful in salads
7 years ago. | Permalink
Janet Brien club
has replied to Jenny McIntyre club

Thanks Jenny! I have always loved using "junk" for new uses, and I just knew this ladder planter would be super cool! There's something very gratifying about taking junk that would go to the dump, and giving it a new life. :)

Chives? Oh yes, I planted two sections of Chives, but I don't know if they will be ready to harvest this year, since they are perennial. We'll see! :D
7 years ago. | Permalink

Thanks very much, I was surprised how nice the pictures turned out! :)
7 years ago. | Permalink
Fizgig
has replied to Janet Brien club

Some really yummy herbs to consider adding: purple/red basil (has a tangy flavor, much better for salads than reg. basil whose flavor tends to overpower, and it's a gorgeous dark color too with beautiful little lavender colored flowers) and chocolate mint (leaves are green on top, purplish on the bottom, and the flavor is amazing besides being very versatile).

Curly parsley is a great addition for its texture -- besides being tasty, it needs much less space and is less attractive to insects than the flat leaf variety.

Tri color sage is also a great one... Adds some fun color, is tasty, and pretty rugged.

Variegated leaf nasturtiums.... very showy, edible, and much less invasive than its plain green leafed cousin. Easy to grow, too!

Aren't you clever, Janet - that ladder is a brilliant idea ! There's nothing nicer than a herb garden - to eat and to just smell and admire !
Oregano looks lovely with its yellowy leaves, even if you don't use it. I chop it up and put it over tomato salad, with oil and vinegar.
7 years ago. Edited 7 years ago. | Permalink
Janet Brien club
has replied to Darwinsweep

Thanks so much! You've made my day with your sweet comment! :D

This will be my first herb garden and I'm so excited to find out how well it does! One of the things that makes me happy is that I am crazy about Thyme flowers, so if I can get these seeds to germinate (I've heard they can be a challenge), I'll have the reward of beautiful flowers too!

You have me tempted with oregano, we'll see about adding that to our garden at some point! :)
7 years ago. | Permalink
Darwinsweep
has replied to Janet Brien club

Thyme is wonderful planted on pathways - every time you walk on it, you get the most wonderful scent ! It grows wild here on the verges and in various parts of our garden.
7 years ago. | Permalink

What a great idea ! From the small pic, I as first thought of an old railroad bet. This is wonderful !
Hope your rewards are many. Thanks for the tip, I',m sure others will now try this method. Have a
great Sunday.
7 years ago. | Permalink

is lovely !!!
7 years ago. Translate | Permalink

Thank you for the comments, Marvin and My Gottica! :)
7 years ago. | Permalink

Love the recycling and perfect for the herbs !
7 years ago. | Permalink

Thank you for the comments, Suus and Pam! :) There are seeds a'poppin' left and right, such an exciting time! :D
7 years ago. | Permalink