Part 5—Dreams of a Big Flower Garden: What Did I Plant? - This is my master list of the flowers and bulbs I planted this year. I may add a sorted version belo… - May 28, 2014
See all articles... 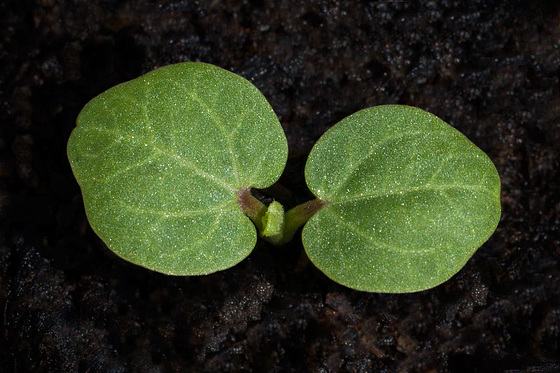 This beautiful seedling is a King Henry Hollyhock! There are 6 other seedlings and since I took this picture, each is showing off their second set of leaves. (I also have a section of Black Hollyhocks. Only one has sprouted so I will be planting more seeds in the hopes that more will germinate.)

There's a Party Goin' On Round Here!
I planted my garden two weeks ago last Monday, and a lot's been happening out there! It's really exciting to see seedlings push their way up and out of the ground.

For germinating seeds, it's extremely crucial to keep the soil moist but not soggy, so I give them a light watering about twice a day, just enough to wet the soil. If it's hot, I may have to apply a bit more but usually it's twice.

As I mentioned in a previous post, most of the seeds I got are from Ebay, and I fully expect that some or maybe even many of them will not germinate because they're too old. I've done my best to plant them at the correct depth and am carrying for them as well as I can. I also know that the time it takes for various species to germinate is highly variable, so I'll be keeping track of this too.

A Few Baby Pictures to Share!
Say hello to some of the kids popping up around my garden! 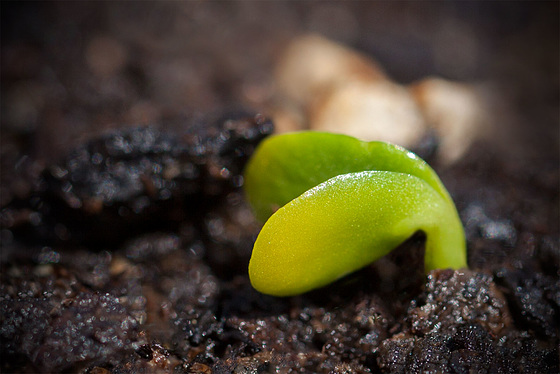 This is a Russell Lupine just coming out of the ground! 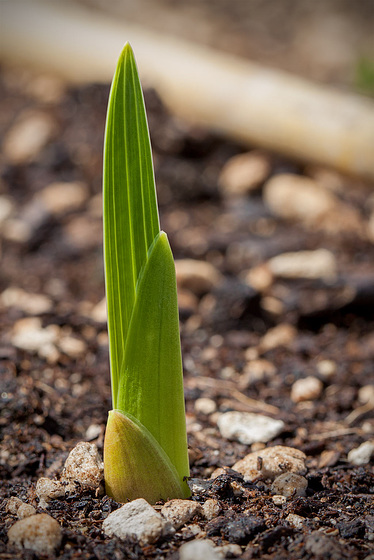 Here is one of the many Gladiolus bulbs that's stretching towards the sky! 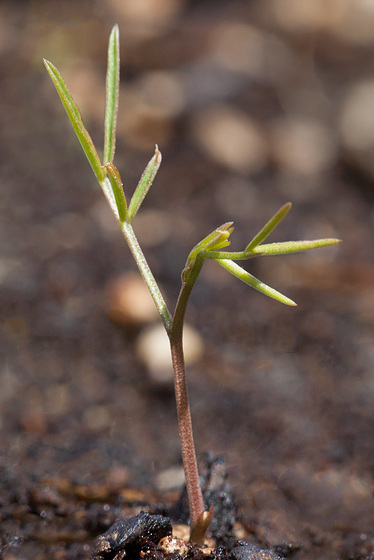 I love Hairy Vetch on the property but in my flower bed it's a weed, so out it goes! 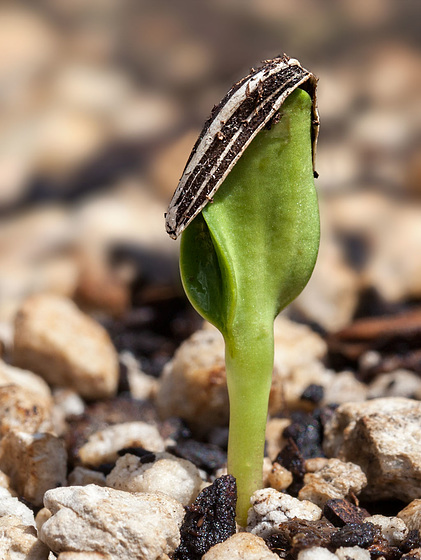 Gee, what do you suppose this is?! :D I love this picture of a Common Sunflower with its black-striped seed coat hat! 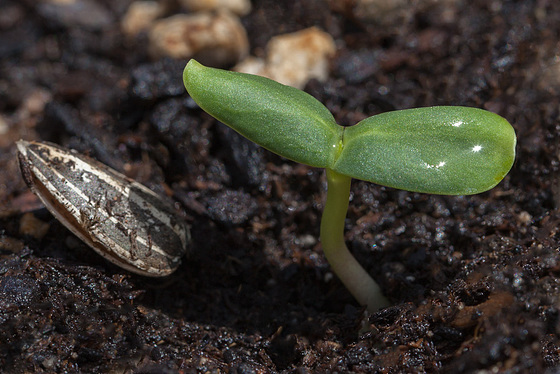 Here's another Common Sunflower that's dropped its seed coat off to the side! 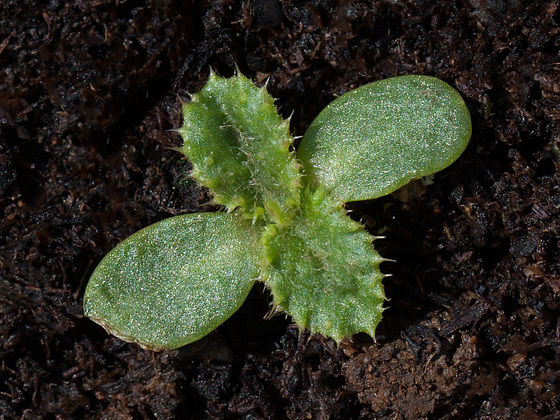 ACK! ALIEN! INVADER! TRESPASSER! This is a Bull Thistle seedling, and I've been yanking this little stinkers out all over the place! The flowers are pretty, but I don't want them in my garden! GET OUT! :) 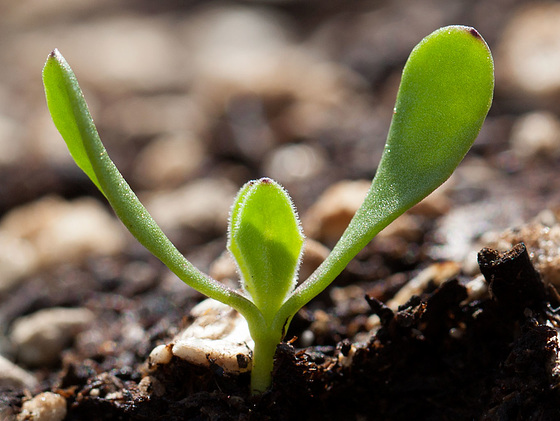 This darling African Daisy seedling wants to give us a friendly hug! So cute, and already beautiful! :) 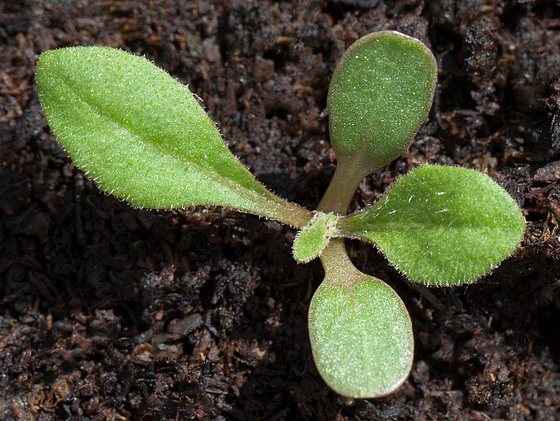 ICK! YUCK! NASTY DANDILION SPECIES!! BE GONE YOU HORRIBLE THING! Lots of these to pull out and toss. A shame because thier first pair of leaves resembles a Zinnia. Phooey...a weed instead. 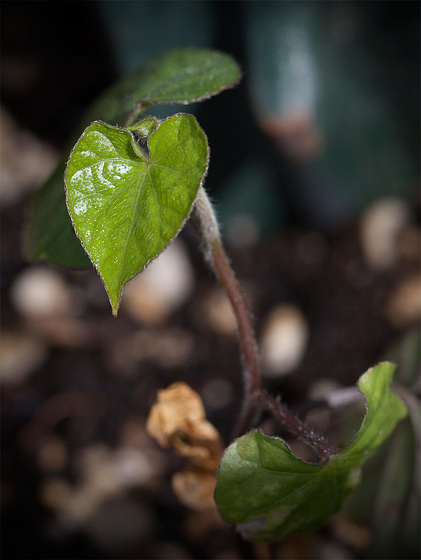 I am in love with Morning Glories, and this is one of two survivors from the mass seedling death caused by Fungus Gnats in my seedling trays. I actually pulled this seedling out of the ground to look at its roots and then gently put it back into its cell. I figured it was just going to die but didn't have the heart to toss it in the trash. Hard to believe this little one and its mate are beginning to get taller now! 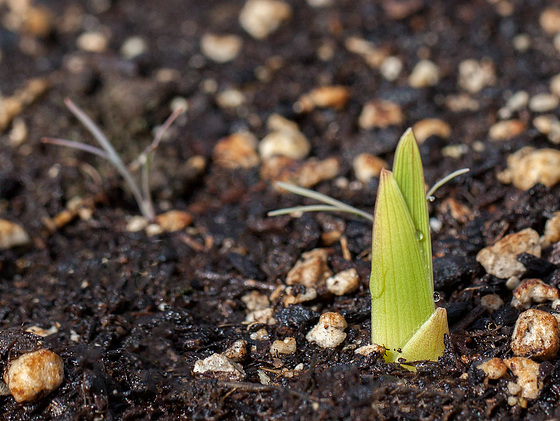 Another Gladiolus bulb popping up! (See the wispy things behind the Gladiolus? Those are poppy seedlings! 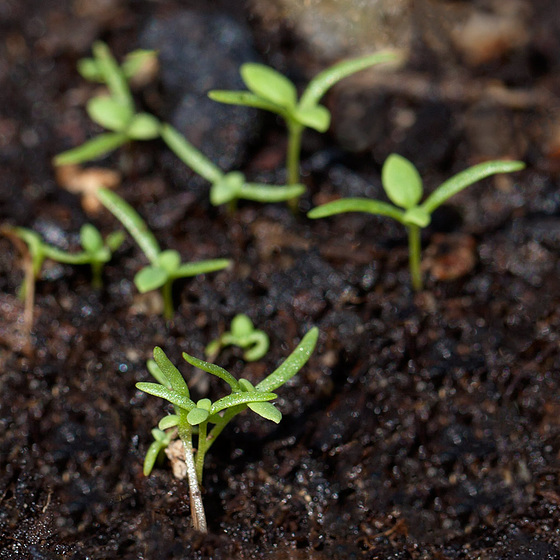 Poppies, poppies everywhere!! This crazy scene is common all over the 20' x 20' bed, as I sprinkled seeds over the entire space. If my ebay seeds don't germinate, it won't matter because I'm going to have poppy flowers growing like mad! 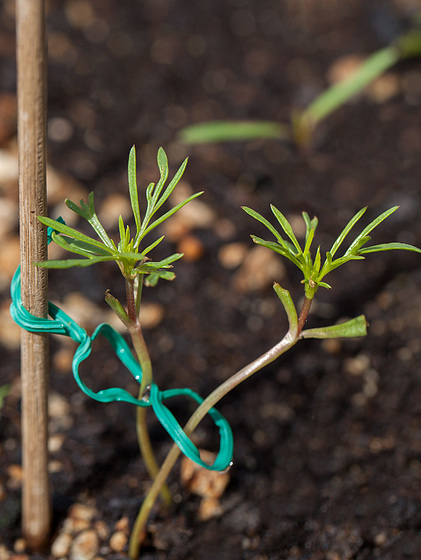 For an easy-to-grow flower from seed, I would recommend Cosmos, Zinnia, or Marigold. Here is one of the Cosmos Candystripe seedlings that survived the Fungus Gnat attack in my seedling trays. It's got secondary leaves and more right now, and is one of about half a dozen that are growing strong and fast! 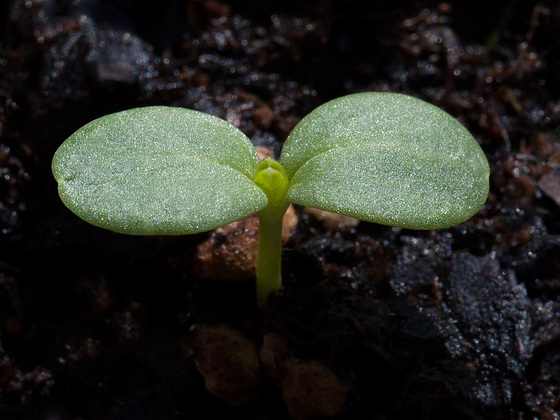 Look at this happy Zinnia Carousel seedling! One of many, I have several types of Zinnias growing in my bed and most of them are exploding out of the ground like crazy!

Next: Steve Wanted an Herb Garden Too...

12 comments - The latest ones

Thanks for the photo show Janet.
Not always easy to know what things are from the first leaf pair though.
:-))
7 years ago. | Permalink
Janet Brien club
has replied to Stormlizard club

You're welcome! :) It's fun for me to share! As for not being able to recognize plants from the first pair...oh, don't I know it!!! Thankfully, the ones I identified are growing in their section and there are many of them that look alike. The weeds I looked online to see seedlings of because I want to get them out of the garden as early as possible. :)
7 years ago. Edited 7 years ago. | Permalink
Stormlizard club
has replied to Janet Brien club

Yes Janet, I can understand you not wanting weeds or wild plants in your flower beds.
I gave up on flower beds years ago so there are only remnants like crocus daffodils and tulips, lupins and periwinkles now except for some flowering shrubs bushes and trees.
7 years ago. | Permalink

How exciting to see things coming up (and beautifully photographed !). I'm dying to see all these things in flower ! Difficult sometimes to tell if something is a weed or a flower !
7 years ago. | Permalink

this is an exciting time for you checking on seedling to see how they fare,great photos
7 years ago. | Permalink

Fabulous set of macros - its looking good in your garden!!
We have thistles galore and buttercups, but at least the lawn looks pretty when they flower ;o)
7 years ago. | Permalink

uuuuh I love the picture with the sunflowerseedhat :-D
7 years ago. | Permalink

Oh I just love the kids. The sunflower is great and it happens to be my daughter's favourite flower. I personally love the poppies. Great pictures too.
7 years ago. | Permalink

Hey, thanks everyone for your comments! It means so much to me! :)
7 years ago. | Permalink

My Morning Glories are just starting to flower even though they are small still... and the Moon flowers are flowering !
7 years ago. | Permalink

Thanks for sharing your garden with us, Janet! I, too, have started my flower garden. This season, I lost a lot of my old lavender bushes with the very harsh winter we suffered, so that freed up space that I haven't had in many years! This has been a wonderful spring for me! I wish you much luck and joy as your garden matures and grows colorful :)
7 years ago. | Permalink

you will have lots of colour soon
7 years ago. | Permalink