...a beautiful morning observed from my window The Red Post Box Infinity Room Scene from the Calfclose Bay Little duckling and its adult role-models A Witch is taking you... Belas Knap Long Barrow English wine shop A hut only... really? Let's build the base, cook, and sleep Let's find a place to sleep in a desert Friendly or not? I think, that... Four Doors in Jaipur In the silent streets of a traditional village Blagaj tekke River, stone, mountain, sky Over there I'd like to have a sleeping room Game of pebbles Alone in the shadow Lovely patterns of stone roofs Mystery of the black cave a Prayer Stari grad Blagaj These kids must be grown ups by now

An object from Space 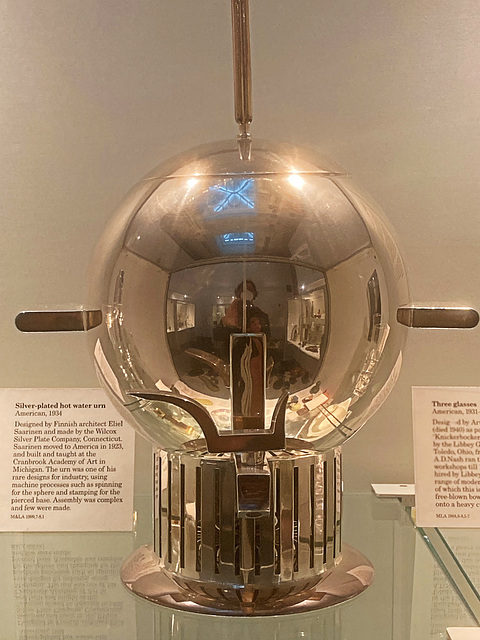 Gottlieb Eliel Saarinen {1873 – 1950) was a Finnish-American architect known for his work with art nouveau buildings in the early years of the 20th century. In 1925 George Gough Booth asked him to design the campus of Cranbrook Educational Community, intended to be an American equivalent to the Bauhaus. Saarinen taught there and became president of the Cranbrook Academy of Art in 1932.

In c. 1929–34, Eliel Saarinen was produced in product design for the Wilcox Silver Plate Co. / International Silver Company in Meriden, CT. His iconic tea urn (c. 1934) was first exhibited in 1934–35 at the Metropolitan Museum of Art in New York. Over the years, the tea urn has been widely exhibited, including in St. Louis Modern (2015–16) at the St Louis Art Museum, Cranbrook Goes to the Movies: Films and Their Objects, 1925–1975 at the Cranbrook Art Museum (2014–15), and in 2005–07, in the touring exhibition Modernism in American Silver:

In 1951–52, the tea urn was featured in the Eliel Saarinen Memorial Exhibition which travelled to multiple venues across the United States. In addition to Cranbrook, the Dallas Museum and the St Louis Museum, The British Museum in London and the Metropolitan Museum of Art also hold tea urn-related Eliel Saarinen designs.
CC BY-NC 3.0 ɱ ƕ An object from Space

Admired in: www.ipernity.com/group/tolerance
4 weeks ago. | Permalink