Infinity Room ...another beautiful morning seen from my kitchen Tree of crows the Fen A water story A folly Happy New Year 2022 (with Barbara) Sky above Orava Horses at 'my' Tor Youngest castle in England Hertfordshire countryside house of Henry Moore Typical scene from an Assamese town Friday Mosque Green markets of Assam An object from Space Scene from the Calfclose Bay Little duckling and its adult role-models A Witch is taking you... Belas Knap Long Barrow English wine shop A hut only... really? Let's build the base, cook, and sleep Let's find a place to sleep in a desert Friendly or not? I think, that... Four Doors in Jaipur In the silent streets of a traditional village Blagaj tekke River, stone, mountain, sky Over there I'd like to have a sleeping room Game of pebbles Alone in the shadow Lovely patterns of stone roofs Mystery of the black cave a Prayer Stari grad Blagaj 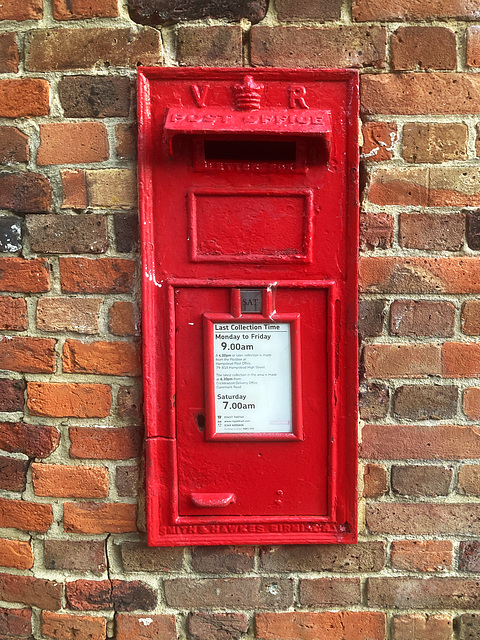 The red post box is an iconic piece of British heritage, having been a familiar piece of the streets for nearly 180 years. There are around 155,500 post boxes across the UK, with a substantial portion of these situated in London. When it comes to post boxes, there are two main factors which distinguish them from each other – their design and the royal cypher. The roadside post box has existed since the reign of Queen Victoria, with every subsequent monarch’s cypher being immortalised on the front (e.g. here - VR - Victoria Regina).

Prior to postal reform in 1840, mail was an expensive form of communication. The Uniform Penny Post was introduced, meaning the sender pre-paid the postal costs, rather than the recipient. The same year, the Penny Black adhesive stamp was released. It wasn’t until 12 years later, the first roadside Post Office pillar box was erected in St Helier, Jersey as a trial. In 1853, the first roadside pillar box was established in the mainland United Kingdom in Carlisle. In 1856, Richard Redgrave (1804-1888) from the Department of Science and Art came up with an ornate pillar box design to be used in London and other cities. From 1857, some post boxes were built into existing walls (as this one, located in Hampstead, North London).

Thank u all
2 months ago. Translate | Permalink

I just love it! Its so beautiful!
2 months ago. | Permalink
ɱ ƕ club
has replied to cp_u club

thank u
7 weeks ago. | Permalink

Beautiful image ~ Thanks for the info
4 weeks ago. | Permalink
ɱ ƕ club
has replied to Dinesh club

you're welcome
4 weeks ago. Translate | Permalink