Ditchley Snark The Snark in your Dreams Hidden Carrol Neuman, Butcher, Jowett Crossing the Line The Bellman and Father Time Inspiration by Reinterpretation Anne Hale Mrs. Hoskins The Broker's and the Monk's Nose William III, Religion and Liberty, Care and Hope Weeds turned Horses (BW) Monster Face Doré (1863), Holiday (1876), Doré (1866) Holiday and Gheeraerts I Henry Holiday alluding to John Martin A Nose Job Billiard-Marker & Henry George Liddell Gnarly Monstrance Bellmen From Doré's Root to Holiday's Rat The Baker's 42 Boxes Bankersnatched by the Bandersnatch On the Road Again IT WAS A BOOJUM While he rattled a couple of bones While he rattled a couple of bones The Banker's Nose and Spectacles The Bellman and Sir Henry Lee Star and Tail Kerchiefs and other shapes Holiday - Millais - Anonymous - Galle From Doré's Root to Holiday's Rat The Bandersnatch fled as the others appeared Holiday - Millais - Anonymous - Galle 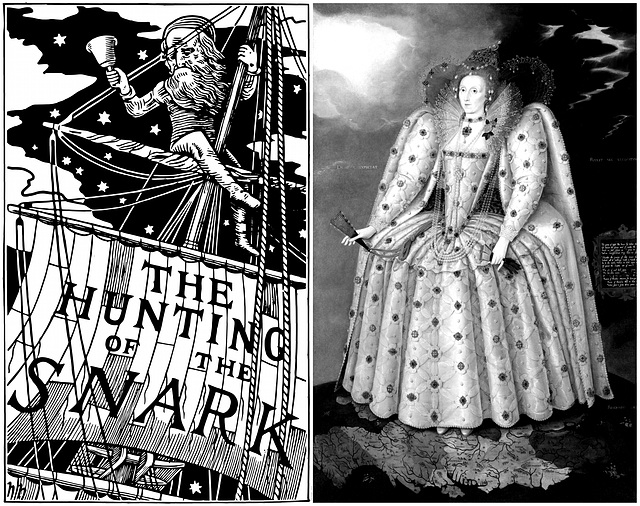 The image shows Henry Holiday's illustration (1876) to the front cover of Lewis Carroll's The Hunting of the Snark compared to a grey shaded reproduction of the Ditchley Portrait (a gift from Sir Henry Lee to Queen Elizabeth I, c. 1592) by Marcus Gheeraerts the Younger.

Perhaps Tufail and Howick both are right. There is more:

"The 'clouds' - or what at first glance appear to be clouds, are another item of considerable interest. If these are indeed supposed to represent clouds, then they are remarkably poor renditions (and Holiday was by no means either a poor, nor slipshod artist). Rather any close examination of this aspect of the illustration leads the observer to think that this background to the Bellman is actually a map, complete with rivers. contrast to the map Bellman presents to his admiring crew."
(John Tufail, The Illuminated Snark, 2004)

As Henry Holiday in his Snark illustrations frequently alluded to works of father&son Gheeraerts, John Tufail's Illuminated Snark gave me the idea to search for a Gheeraerts painting in which a map is shown. John reckoned, that the clouds in Holiday's front cover illustration may be part of a map. I think that this possibility cannot be excluded. John's assumption then drew my attention to the Ditchley portrait. (The Ditchley portrait again helped me to find sources for Holiday's illustration to the back cover of Carroll's book as well.)