next >
< previous
/
Close
Albums Albums in this folder Album Photos Add a comment Most appreciated Most viewed Most commented
Updates
2014-08-16 and later:

About my Snark hunt

===== How I got into Snark hunting ===== In December 2008, I searched for “Hidden Faces” in the Wikipedia . I wanted to see whether an illustration by Henry Holiday (left) to Lewis Carroll’s The Hunting of the Snark was mentioned there. (Now it is.) But instead of that I found Gheeraert's Allegory of Iconoclasm (right, aka The Image Breakers ) in the Wikipedia article on hidden faces. And then I saw a little rhombic pattern in the “mouths” of the “heads” depicted in both illustrations. The Snark hunt had begun. left: 2009: Illustration by Henry Holiday to fit the eight in Lewis Carroll's The Hunting of the Snark (This is the 2007 version of an image in ebooks.adelaide.edu.au/c/carroll/lewis/snark/#fit8 .) center: 2008-12-16: Detail from "Hidden Faces" in en.wikipedia.org, en.wikipedia.org/w/index.php?title=Hidden_faces&oldid=258354510 right: Marcus Gheeraerts the Elder, Allegory of Iconoclasm , c.1566–1568 etching 15” x 10.4”, British Museum, London. commons.wikimedia.org/wiki/File:Gheerhaets_Allegory_iconoclasm.jpg (In December 2008 the image was smaller: upload.wikimedia.org/wikipedia/commons/archive/f/f5/20100214083045!Gheerhaets_Allegory_iconoclasm.jpg , but even there you can see the detail which cought my attention.) (The blur is intentional. It removes unecessary details.) 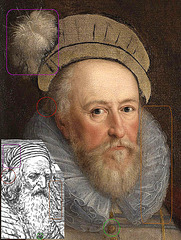 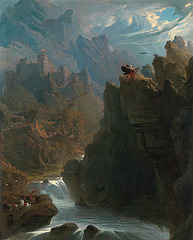 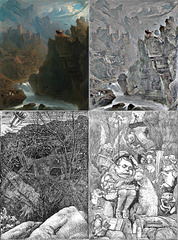 The Banker and The Bonnetmaker 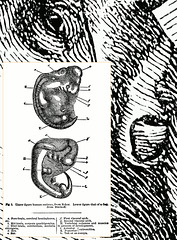 Background: Rotated detail from an illustration by Henry Holiday to Lewis Carroll's The Hunting of the Snark Foreground: From Charles Darwin's The Descent of Man - en.wikipedia.org/wiki/The_Descent_of_Man,_and_Selection_in_Relation_to_Sex - commons.wikimedia.org/wiki/Descent_of_Man_%28A._L._Burt_edition%29 The Banker is one of the members of the Snark hunting party. Henry Holiday can draw ears. If the Banker's ear looks strange it is meant to look strange. 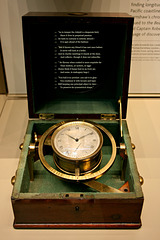 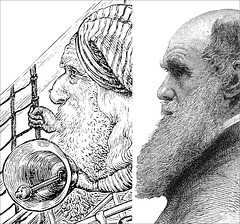 The Bellman and Charles Darwin

1876 and around 1870. If it was for this pairing only, I would not use this side-by-side image as an example for allusions to Charles Darwin (19th century portrait) in Lewis Carroll's and Henry Holiday's The Hunting of the Snark . Also, too obvious allusions to Darwin would have narrowed the interpretation space which Carroll wanted to leave to his readers. However, there is more . Darwin portrait found in What Mr Darwin Saw in His Voyage Round the World in the Ship ‘Beagle’ , 1879. »Extracts paraphrased by W.P. Garrison from Darwin’s Beagle diaries. Son of a US abolitionist, W.P. Garrison published this work anonymously. His stated aim was to 'interest children in the study of natural history, and physical and political geography'. Garrison selected extracts from Darwin's original diaries, reorganising material thematically into four parts: 'Animals', 'Man' (strange peoples and customs, particularly of savage and barbarous life), 'Geography' (physical features of the countries visited by Mr Darwin) and 'Nature' (account of the grandeur of terrestrial processes).« Source: University of Cambridge > Department of History and Philosophy of Science > Whipple Library > Rare book collections > Online exhibitions 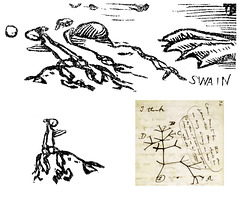 Segment of an illustration by Henry Holiday (cut by Joseph Swain) in Lewis Carroll's The Hunting of the Snark , 1876 The segment on the lower right side is Charles Darwin's Tree of Evolution or Tree of Life sketch in his 1st notebook, page 36, 1837-1838. I learned, that Darwin did not keep his notebook secret after the publication of On the Origin of Species , but I do not know of any presentation of his sketch before 1876. Thus, the resemblance between the "weed" and Darwin's evolutionary tree sketch propably is purely incidental. Postprocessing: GIMP perspective transformation tool Questions: (1) When did Charles Darwin publish a facsimile of his sketch fo the first time? When (e.g. in lectures etc.) was it presented for the first time? (2) Or is there a completely different explanation? Holiday's "weed" also could allude to an eagle riding a wild boar . 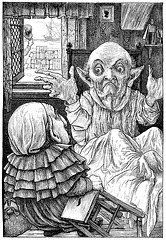 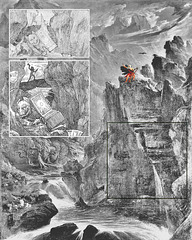 [main image]: John Martin: The Bard (ca. 1817) , by GIMP: contrast enhanced in the rock area & light areas delated & (most of) color removed & retinex filtering [upper inset]: Detail from preperatory draft for Henry Holiday's illustration (1876) to chapter The Beaver's Lesson in Lewis Carroll's The Hunting of the Snark [lower inset]: Henry Holiday: Illustration (1876) to chapter The Beaver's Lesson in Lewis Carroll's The Hunting of the Snark , detail It seems, that initially Henry Holiday saw anthropomorphic "faces" in John Martin's rocks and used them in his draft. However, Holiday's final allusion to this part of John Martin's painting is different - and funnier. As the for The Bard , the final Bellman comes closer to that figure than the drafted Bellman. === Literature === In mydailyartdisplay.wordpress.com/the-bard-by-john-martin , "Jonathan" connects the painting to the poem The Bard written by by Thomas Gray in 1755. Inspired by a Welsh tradition that said that Edward I had put to death any bards he found, to extinguish Welsh culture; the poem depicts the escape of a single bard: · · ... · · On a rock, whose haughty brow · · Frowns o'er cold Conway's foaming flood, · · Robed in the sable garb of woe · · With haggard eyes the Poet stood; · · ... · · A Voice, as of the Cherub-Choir, · · Gales from blooming Eden bear; · · And distant warblings lessen on my ear, · · That lost in long futurity expire. · · Fond impious Man, think'st thou, yon sanguine cloud, · · Rais'd by thy breath, has quench'd the Orb of day? · · To-morrow he repairs the golden flood, · · And warms the nations with redoubled ray. · · "Enough for me: With joy I see · · The different doom our Fates assign. · · Be thine Despair, and scept'red Care, · · To triumph, and to die, are mine." · · He spoke, and headlong from the mountain's height · · Deep in the roaring tide he plung'd to endless night. · · ... Full text: www.thomasgray.org/cgi-bin/display.cgi?text=bapo spenserians.cath.vt.edu/TextRecord.php?action=GET&tex... www.english.upenn.edu/~mgamer/Etexts/gray.bard.html www.google.com/search?q="A+Voice,+as+of+the+Cherub-Choir" The poem and the painting may have been an inspiration to Lewis Carroll and Henry Holiday in The Hunting of the Snark . This is about The Vanishing of The Baker : · · 537 · · "There is Thingumbob shouting!" the Bellman said, · · 538 · · · · "He is shouting like mad, only hark! · · 539 · · He is waving his hands, he is wagging his head, · · 540 · · · · He has certainly found a Snark!" · · 541 · · They gazed in delight, while the Butcher exclaimed · · 542 · · · · "He was always a desperate wag!" · · 543 · · They beheld him--their Baker--their hero unnamed-- · · 544 · · · · On the top of a neighbouring crag. · · 545 · · Erect and sublime, for one moment of time. · · 546 · · · · In the next, that wild figure they saw · · 547 · · (As if stung by a spasm) plunge into a chasm, · · 548 · · · · While they waited and listened in awe. Album: John Martin 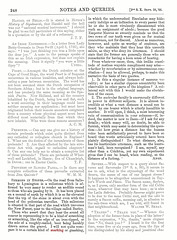 See also: www.academia.edu/10407335/Scratching_or_Scranching_is_not_quite_like_Snarking_or_Gnashing_1866_ SERMONS IN STONES. -- On the road from Salisbury to Lymington is a milestone which is affirmed by very many to render an audible sound to those who are passing by it. It has been placed on a mound of earth by which it is so far elevated that the top of the stone is about even with the head of the pedestrian traveller. This milestone is situated in that part of the road which traverses the New Forest, near to the village called Burley. Those who assert that they hear the sound all concur in representing it to be a kind of scratching or scranching, like the edge of an iron-tipped, or the sole of a roughly-nailed, boot being harshly drawn across the gravel. I will not quite compare it to a certain kind of snarking or gnashing, in which the undercrushed Enceladus may hideously indulge as an indication to every passer that he or she is most virulently discontented with such an assignment of abode; because the good Emperor Marcus so sweetly reminds us that the two rows of our teeth were given us for mutual concurrence, not for discord. About as numerous, however, and quite as worthy of credence, are they who maintain that they hear this uncouth salute, as they who deny its utterance. I should state that the former are generally those who are remarkable for having a keen sense of hearing. From whatever cause, then, this irelike crassitude of restless wayside compliment may arise whether by reverberation or by subterraneous concitation I may be allowed, perhaps, to make this narrative the basis of two queries. 1. Is this a singular instance of saxeous vocality; or has a similar cippous eccentricity been observable in other parts of the kingdom ? A collateral suit with this I would make the elucidation of the cause. 2. The auricular faculty is enormously different in power in different subjects. It is almost incredible at what a vast distance a sound can be heard by one hearer which is utterly inaudible to another. It will open, I think, a most interesting vein of communication in your columns if, in deed, the matter is new to them if I ask for any details; which many will, no doubt, be able to furnish, which may assist in determining the question At how great a distance has the human voice been satisfactorily proved to have been so heard that words articulately uttered have been plainly distinguished ? To what distance, also, has its inarticulate utterance, such as the huntsman's hail, been recognised ? I am, myself, any other than a Crichton, yet my own experiment gives that I can be heard, when reading, at the distance of a furlong. * ANON. Source: Notes and Queries (1866-09-29), Series 3, Volume 10, p. 248 doi: 10.1093/nq/s3-X.248.248-f archive.org/stream/s3notesqueries10londuoft/s3notesqueries10londuoft_djvu.txt 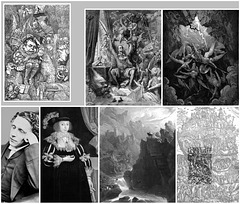 6 Sources to the Beaver's Lesson 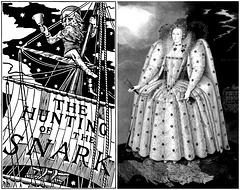 The image shows Henry Holiday's illustration (1876) to the front cover of Lewis Carroll's The Hunting of the Snark compared to a grey shaded reproduction of the Ditchley Portrait (a gift from Sir Henry Lee to Queen Elizabeth I, c. 1592) by Marcus Gheeraerts the Younger. "While I concede Tufail 's thesis (2003) that Holiday received his instructions from Carroll and created his illustrations to reflect Carroll's cryptic messages and allusions, I contend that the interpretations given to the words we know so well by so many illustrators over a period in excess of 130 years continue to keep the Snark alive. Furthermore, it is my personal belief that Holiday managed to slip in a few interpretations of his own even though Carroll approved of the end result." (Doug Howick: The Hiihijig of the Bijtcheb, Knight Letter #28, Summer 2009) Perhaps Tufail and Howick both are right. There is more: "The 'clouds' - or what at first glance appear to be clouds, are another item of considerable interest. If these are indeed supposed to represent clouds, then they are remarkably poor renditions (and Holiday was by no means either a poor, nor slipshod artist). Rather any close examination of this aspect of the illustration leads the observer to think that this background to the Bellman is actually a map, complete with rivers. contrast to the map Bellman presents to his admiring crew." (John Tufail, The Illuminated Snark , 2004) As Henry Holiday in his Snark illustrations frequently alluded to works of father&son Gheeraerts, John Tufail's Illuminated Snark gave me the idea to search for a Gheeraerts painting in which a map is shown . John reckoned, that the clouds in Holiday's front cover illustration may be part of a map. I think that this possibility cannot be excluded. John's assumption then drew my attention to the Ditchley portrait. (The Ditchley portrait again helped me to find sources for Holiday's illustration to the back cover of Carroll's book as well.) 2013-12: Evidence supporting of John Tufail's thesis: www.doylenewyork.com/asp/fullcatalogue.asp?salelot=13BP04+++553+&refno=++953647&image=0 (see also: groups.yahoo.com/neo/groups/carrolliana/conversations/topics/358 ) 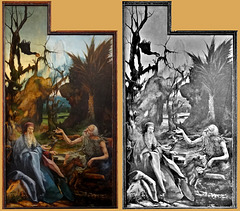 [top]: Matthias Grünewald: "Visit of Saint Anthony to Saint Paul", retinex filtered, vectorized and color desaturated detail from Isenheim altarpiece (1512–1516). Perhaps also elements from the other altarpiece depicting "The Temptation of Saint Anthony" went into Holiday's illustration (see also Mahendra Singh's blog justtheplaceforasnark.blogspot.de/search/label/Matthias%20Gr%C3%BCnewald ). [bottom]: Henry Holiday: from an illustration to the chapter "The Beaver's Lesson" in Lewis Carroll's "The Hunting of the Snark". 2018-12-27: I tweeted my finding to the Musée Unterlinden. And they retweeted it: snrk.de/kitty 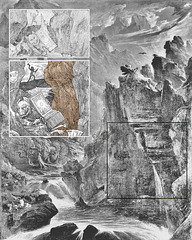 I think that Henry Holiday had quite some fun in imagining how the beholders of his illustrations would deal with what they might see. And the cannot hold him responsible for what they see.
63 items in total
Jump to top