112/365: "True delight is in the finding out rathe… San Francisco Zoo: Bald Eagle Narrowleaf Indian Paintbrush: The 163rd Flower of… 113/365: "Romance is the glamour which turns the d… San Francisco Zoo: African Helmeted Guinea Fowl A Hug & Dedication to my Wonderful, Dear Friend in… 114/365: "It does not do to leave a live dragon ou… 115/365: "Concentrate all your thoughts upon the w… Dumping Water on the Burn Pile The Beautiful Klamathweed Beetle (2 pictures below… Find of Yesterday: Tiny Red Frilly Flowers? Nope!… 116/365: "The skies turned to black, The oceans fe… 117/365: "Let us be grateful to people who make us… 118/365: "By the time we hit fifty, we have learne… San Francisco Zoo: Greater Kudu (1 pic below) Love Bugs Covered in Pollen! 119/365: "Come forth into the light of things, let… Psychedelic Rainbow Droplets OR Alice in Wonderlan… Dreamy Green Droplets 120/365: "All life is an experiment. The more expe… Bee Taking Off After a Tasty Iris Nectar Beverage!… 365: April Collage 121/365: "Just living is not enough. One must have… Madrone Blossoms San Francisco Zoo: Mandrill Baboon 111/365: "Each flower is a soul opening out to nat… Honey Bee on Maple Flower Channelling Red Stilletto San Francisco Zoo: Pair of Preening Penguins 110/365: "I'm always astonished by a forest. It ma… Sporophyte Tear Drops Spikey Moss San Francisco Zoo: Giraffe and Young Kudu 109/365: "I'd kiss a frog even if there was no pro… Mr. Green Jeans Dreamy Bird's Foot Trefoil (1 more pic below) San Francisco Zoo: Prairie Dog, and Janet Has Offi… 108/365: "Anger is as a stone cast into a wasp's n… Paper Wasp Guarding Her Nest (2 more pics below) Paper Wasp Nest Paper Wasp Egg Lovely Desert Parsley San Francisco Zoo: Sunbathing Penguin 107/365: "Blue thou art, intensely blue; Flower, w… I Spy With My Compound Eye, Another Seablush, To W… 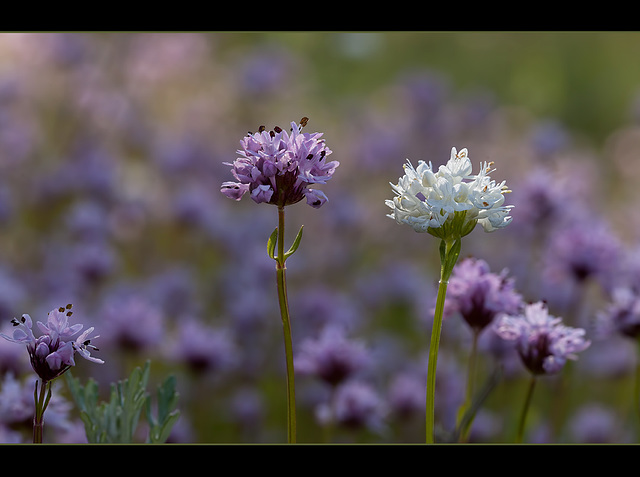 Here's another view of the pure white Shortspur Seablush, standing proudly next to a normal pink flower. What a fantastic find! :)

RHH club
I am going to comment on this one, first because it was the "favorite" photo on your homepage and also because it's that same white Seablush that makes me blush green with jealousy. Lovely photo and such beautiful flowers! It strikes me as I look at this that the white not only lacks color in the petals but also in the stamens - a true albino - and that's quite rare in nature. Wish I could see them.

Anyway, we are doing fine. Have a case of the virus here in Medical Lake and two others in Spokane, but it hasn't touched anyone we know. We're not panicked by it anyway and are just waiting to see what happens. I'm even interested in watching what happens and especially watching the irrational behavior of some. People, apparently, don't know how to act in a crisis except selfishly and foolishly.

A girl from church works in a grocery store. Saturday they doubled their highest sales day ever. They are out of canned goods, Top Ramen, milk, eggs, meat paper goods, medicines, and I don't remember what else. She said she had to stand up to and argue with grown men about the limits they've placed on certain things, especially toilet paper (she's about five feet tall), just a little thing but feisty enough.

It so happens that we could probably survive here for several months without going to the store. We have a lots of camping food anyway and, as you know, recently started making our own backpacking meals, so we have all kinds of freeze dried meat, fruit and veggies, as well as a lot of Nido, the full cream powdered milk that Nestle makes, and that we use for hiking and backpacking.

I hate ordinary powdered milk. We were given it as kids, usually mixed with whole milk, but hated the taste of it and if whoever was making it didn't make it properly, the lumpiness. This, however, is very good and almost indistinguishable from fresh milk. We pack it with homemade granola (just add water) for breakfast and use it in coffee and tea also. We buy it in very large cans (Walmart and Amazon both carry it).

The case in Medical Lake has brought about the closure of Neal's facility. We are still able to have him but can't go on the campus or on his cottage. They have to bring him to us. I understand that, though. There are so many vulnerable people there. The shutdown also means our committee will not be meeting and we've given a 90 day emergency extension on all requests for meds, restraints, etc.

All our grandkids in Michigan, Edmonton and here are out of school for six to eight weeks. They all think it's a grand holiday but their mothers have already informed them otherwise. Jessica said, I have all these extra hands around and I'm going to get the spring cleaning and yard work done, and if they think they're not going to do any schoolwork, they'd better guess again.

Made scones, blueberry and cheese for breakfast this morning and Nance brought a couple over to the widow lady next door as well. We have two widows, next door and across the street and try to help them out as much as possible - snow blowing, yard work, food, etc. Nancy is especially good at that - she is always doing something for others and always thinks of others before herself.

Guess that's it. Don't mind much being confined to home since I have a number of projects I want to get done and this is an opportunity to get at them.
4 months ago. | Permalink