Find of Yesterday: Tiny Red Frilly Flowers? Nope!… 116/365: "The skies turned to black, The oceans fe… 117/365: "Let us be grateful to people who make us… 118/365: "By the time we hit fifty, we have learne… San Francisco Zoo: Greater Kudu (1 pic below) Love Bugs Covered in Pollen! 119/365: "Come forth into the light of things, let… Psychedelic Rainbow Droplets OR Alice in Wonderlan… Dreamy Green Droplets 120/365: "All life is an experiment. The more expe… Bee Taking Off After a Tasty Iris Nectar Beverage!… 365: April Collage 121/365: "Just living is not enough. One must have… Graceful Stem and Lovely Tendrils Magic Hour 122/365: "Morning ... 'tis Nature's gayest hour!"… San Francisco Zoo: Silverback Gorilla Head-study San Francisco Zoo: Silverback Gorilla Daffodil Bride (1 picture below) [Explore] 123/365: "The longer you look at an object, the mo… San Francisco Zoo: Peacock Tail Black Russion Tomato Blossom 124/365: "Friendship is a word, the very sight of… Dumping Water on the Burn Pile 115/365: "Concentrate all your thoughts upon the w… 114/365: "It does not do to leave a live dragon ou… A Hug & Dedication to my Wonderful, Dear Friend in… San Francisco Zoo: African Helmeted Guinea Fowl 113/365: "Romance is the glamour which turns the d… Narrowleaf Indian Paintbrush: The 163rd Flower of… San Francisco Zoo: Bald Eagle 112/365: "True delight is in the finding out rathe… Pure White Shortspur Seablush Madrone Blossoms San Francisco Zoo: Mandrill Baboon 111/365: "Each flower is a soul opening out to nat… Honey Bee on Maple Flower Channelling Red Stilletto San Francisco Zoo: Pair of Preening Penguins 110/365: "I'm always astonished by a forest. It ma… Sporophyte Tear Drops Spikey Moss San Francisco Zoo: Giraffe and Young Kudu 109/365: "I'd kiss a frog even if there was no pro… Mr. Green Jeans

The Beautiful Klamathweed Beetle (2 pictures below!) 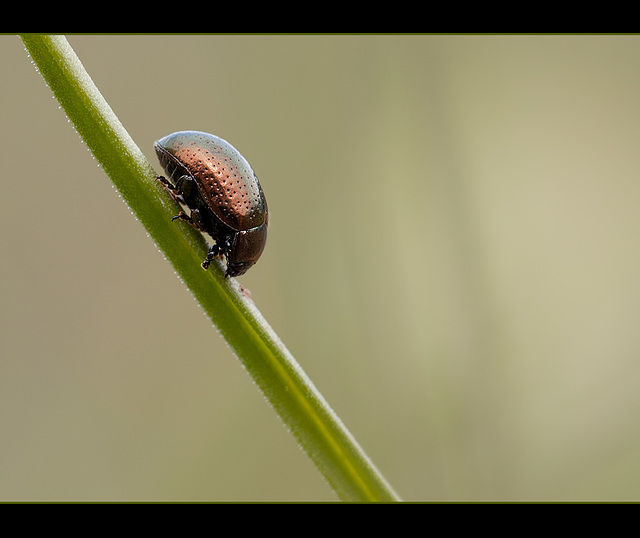 I found this lovely, metallic bronze beetle yesterday as I wandered around taking pictures while I kept an eye on our smouldering burn pile. The only time I've ever seen this beetle is on St. John Wort blossoms, where they breed and congregate. The are fairly difficult to photograph on those flowers because they stuff themselves into the base of stems and run around behind the blossoms if they notice me. However, this little guy was in the perfect place for a picture and he didn't move quickly, so I got time to compose my image the way I wanted it! :)

From the Klemson University:
The Klamathweed beetle, Chrysolina quadrigemina, is native to northern and central Europe and western Asia. The first North American introduction was reported from California in 1945 where it was introduced as a biological control for St. John's Wort (Hypericum perforatum) which was listed on the federal noxious weed list. The beetle has become well established in California, Idaho, Montana, Oregon, Washington and most recently, western North Carolina where it defoliates H. perforatum by targeting hypericin containing glands. The presence of the Klamathweed beetle in North Carolina was first reported in 1997 from a shipment of fresh St. John's Wort harvested from naturalized populations in Oregon. The beetles overwintered successfully and established a population in Brevard, NC. Additional populations were detected in 1999 from experimental plantings located in Ashe County, NC, at the Upper Mountain Research Extension Station and the Mountain Horticultural Crops Research & Extension Center (MHCREC) in Fletcher, NC.
Suggested groups:
Comments