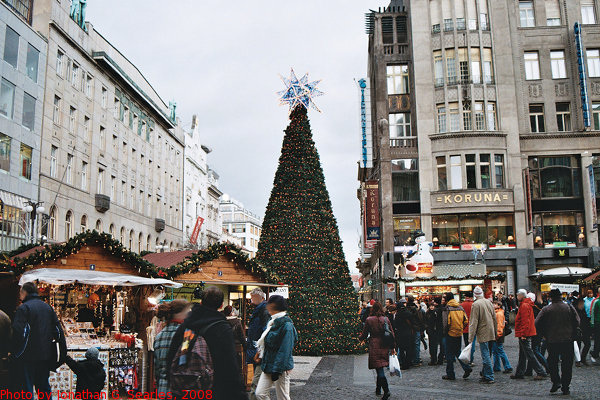 Another Christmas tradition in the Czech Republic is that most communities have a Christmas market in the center of town. Even Benesov has at least something that could be described as such, but Prague has many, as it's a city of 1.2 million people. One of them is in Staromestske Namesti, another is in Malostranske Namesti, another is in Namesti Miru, the usual marketplace in Havelske Trziste becomes a Christmas market of sorts, and then there's this one, at the Mustek end of Vaclavske Namesti, which usually has a big Christmas tree, with 2008 being no exception. The building that you can see in the background, on the right, is Palac Koruna, and the street heading back is Na Prikope, which goes to Namesti Republiky, which has yet another Christmas market.
Suggested groups:
Comments