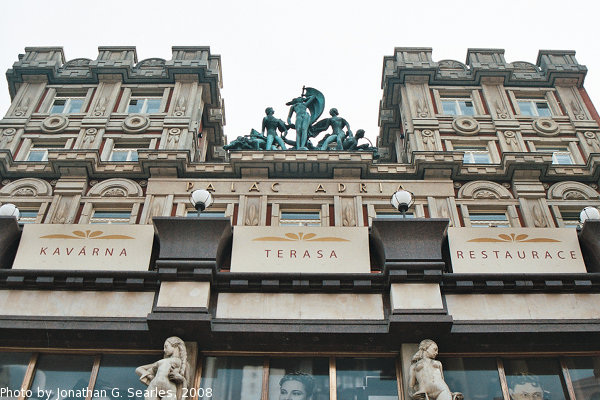 Palac Adria aroused some controversy immediately post-1989 during privatisation of Prague's real-estate, when there was talk of selling it to a detergent company (or so the plan went, anyway, I know little about what ultimately happened). Vaclav Havel, who was president at the time, caught most of the flak, as he supported the sale, on the basis that a successful business could invest more money in its restoration than the government could. Critics thought it inappropriate to privatise a property of Palac Adria's architecural and historic significance, if god forbid it could be torn down or arsoned. For more on this, see the documentary film about Vaclav Havel "Obcan Havel," a.k.a. "Citizen Havel." In the end, it survived, and is today a successful office building, theatre, and coffeehouse, as seen here. Built in 1922-1925, and designed by Jakub Potucek, Palac Adria is considered a prime example of rondo-cubist architecture. It was originally supposed to be for an Italian insurance company, so there are a lot of interesting mosaics inside depicting the different types of insurance on offer.
Suggested groups:
Comments