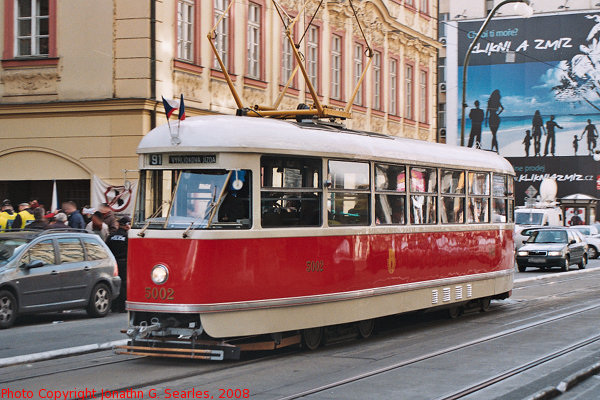 Here's more of a closeup shot of #5002. The commotion over to the left is in an arcade of sorts which contains the memorial to November 17th and the Velvet Revolution. The Velvet Revolution was a gradual process, of course, and it didn't begin or end on November 17th, 1989, but in Prague November 17th was when students held a demonstration on roughly this spot, which the police broke up with violence. At the time a death was reported, which rumour subsequently escalated, in the public perception, into a "massacre," which resulted in weeks of demonstrations, which may have involved as many as 500,000 people. The irony is that the rumor of the dead student was disseminated by the StB, the Communist secret police. A five-hour general strike on November 27th may have involved more, however, as the population of Czechoslovakia at that time was in excess of 15 million. On the 28th, the Communist government, rather than carrying out a real massacre on the model of Tianamen Square, instead decided to announce their resignation, which took effect on December 10th. The interim government shared power between Communists and non-Communists until an election could be called in June of 1990. An interesting side note was that this interim government included Alexander Dubcek, the former Communist president who provoked the 1968 Soviet invasion with his liberal policies. The 1990 election resulted in Vaclav Havel, a playwright and founding member of Carta 77 (the most prominent organization to oppose the Communist regime), being elected the new president.
Suggested groups:
Comments