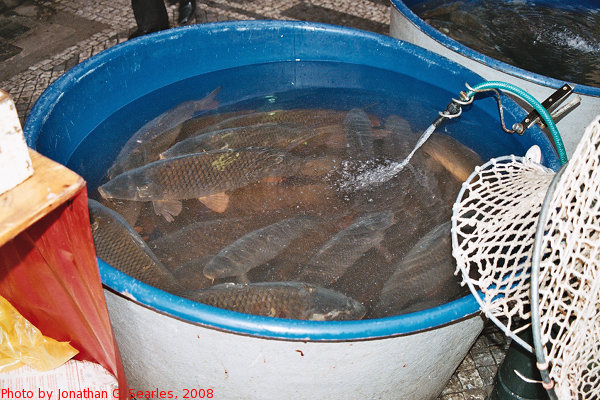 During the Christmas season in the Czech Republic, the traditional meat for dinner isn't turkey, like in the United States, but carp, and traditionally these fish can be bought on the street at stands like these. These fish in this tub were alive, but over on the left, off camera, the fishmonger was clubbing the fish to death with a hammer (an ordinary clawhammer like what you would use for nails) and wrapping them for customers, with the whole area consequently being splattered in blood and fish entrails. Note that this was going on in Spalena, an ordinary street with trams, cars, and trucks running through (although the tub and table were set up on the sidewalk), Christmas crowds walking all over the place, and a Tesco's operating across the street. As I was taking this photo, I wondered if I would be splattered with blood, but I wasn't.
Suggested groups:
Comments