Höfn Vatnajökull Icecap, the view from Höfn The harbour in Höfn The harbour in Höfn Graffiti painting on a house wall in Reykjavik The Hekla volcano and its eruption history Climbing on the lava hills Beside the highway no. 1 Svartifoss (The Black Waterfall) Beach at the dam bank Reeds swayed by the wind in the sunset Mekong with low water level caused by reckless Chi… First Thai–Lao Friendship Bridge A stupa in the sunset Phra That Bun Paun, Buddha statue under weather pr… Vendor for spices, herbs and natural medicines That Phanom temple gable Mahout and his elephant called Lamduan Indochina market in Mukdahan The Mun river flows into the Mekong Gate to the temple complex The Mekong near Nakhon Phanom Mekong in the evening light Walk along the Vatnajökull glacier Tour amphibian vehicles for a Jökulsárlón excursio… Ice rocks on the black beach Natural ice sculpture on the black beach of Jökuls… More ice pieces on the Jökulsárlón beach Natural ice sculptures in foreground Svínafellsjökull Glacier Tongue The highway no. 1 passing the Hoffellsjökull glaci… Driving along endless lava fields Sleeping Hekla volcano Going close to the Hekla volcano The landscape around the Hekla volcano The highway back to Selfoss village Hot springs near Reykjavik The Old Harbour of Reykjavik Reykjavik skyline under heavy weather Minke whale shows its backside On the way to the Blue Lagoon The Blue Lagoon The Blue Lagoon outside A walk in the Skaftafell nationalpark Glacial lake in Skaftafell 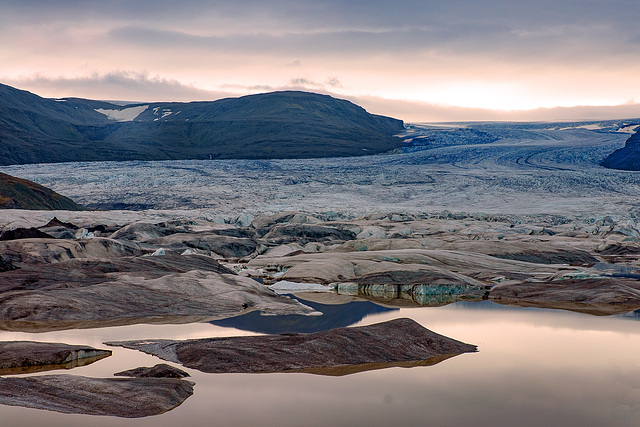 The largest glacier in Iceland is Vatnajökull and it is the largest glacier mass in Europe. It covers an area of roughly 8100 km 2, and is about 1000m thick where it is thickest. Its average thickness is between 400 and 500m, and the total ice volume of Vatnajokull is probably in the vicinity of 3300 cubic km. The ELA lies at ca. 1100 m a.s.l. along its southern margins, at 1200 m along its western part, and at 1300 m in its northern part. About 60% of the glacier surface is above the ELA. The ice cap covers a highland plateau, generally reaching 600-800 m altitude, but dissected by numerous broad and narrow subglacial valleys. A number of large volcanoes are covered by the great ice cap, including Oraefajokull (Öræfajökull) (2111 m), Bardarbunga (Bárðarbunga) (2020 m) and Grimsvotn.