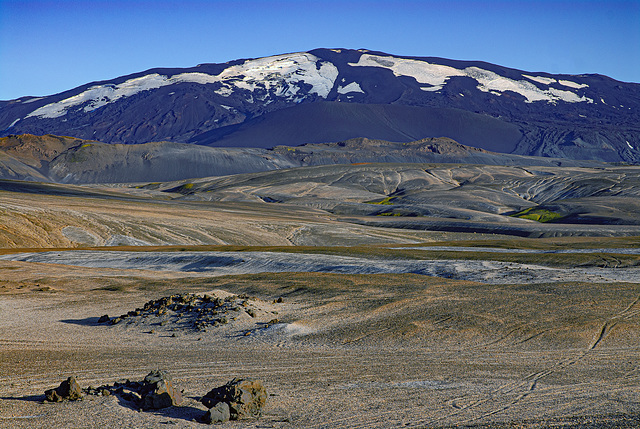 Hekla is a stratovolcano located in the south of Iceland close to the village Hella with a height of 1.488 metres. Hekla is Iceland's most active volcano; over 20 eruptions have occurred in and around the volcano since 874. During the Middle Ages, Icelanders called the volcano the "Gateway to Hell."
Hekla is part of a volcanic ridge, 40 kilometres long. However, the most active part of this ridge, a fissure about 5.5 km long named Heklugjá, is considered to be the volcano Hekla proper. Hekla looks rather like an overturned boat, with its keel being in fact a series of craters, two of which are generally the most active.
The volcano's frequent large eruptions have covered much of Iceland with tephra and these layers can be used to date eruptions of Iceland's other volcanos. 10% of the tephra produced in Iceland in the last thousand years has come from Hekla, amounting to 5 qkm. The volcano has produced one of the largest volumes of lava of any in the world in the last millennium, around 8 qkm.