Beach at the dam bank Reeds swayed by the wind in the sunset Mekong with low water level caused by reckless Chi… First Thai–Lao Friendship Bridge A stupa in the sunset Phra That Bun Paun, Buddha statue under weather pr… Vendor for spices, herbs and natural medicines That Phanom temple gable Mahout and his elephant called Lamduan Indochina market in Mukdahan The Mun river flows into the Mekong Gate to the temple complex The Mekong near Nakhon Phanom Mekong in the evening light Wat Ban Nam Kam in Nakhon Phanom The gate to the temple complex At the Mekong riverside near Nakhon Phanom Picnic underneath the holy Bodhi Tree That Phanom temple complex Wat That Phanom in Nakhon Phanom In the yard of That Phanom Stone formations in the Pha Thaem National Park Prehistoric paintings in the Pha Thaem National Pa… Beside the highway no. 1 Climbing on the lava hills The Hekla volcano and its eruption history Graffiti painting on a house wall in Reykjavik The harbour in Höfn The harbour in Höfn Vatnajökull Icecap, the view from Höfn Höfn Vatnajökull Icecap Walk along the Vatnajökull glacier Tour amphibian vehicles for a Jökulsárlón excursio… Ice rocks on the black beach Natural ice sculpture on the black beach of Jökuls… More ice pieces on the Jökulsárlón beach Natural ice sculptures in foreground Svínafellsjökull Glacier Tongue The highway no. 1 passing the Hoffellsjökull glaci… Driving along endless lava fields Sleeping Hekla volcano Going close to the Hekla volcano The landscape around the Hekla volcano The highway back to Selfoss village 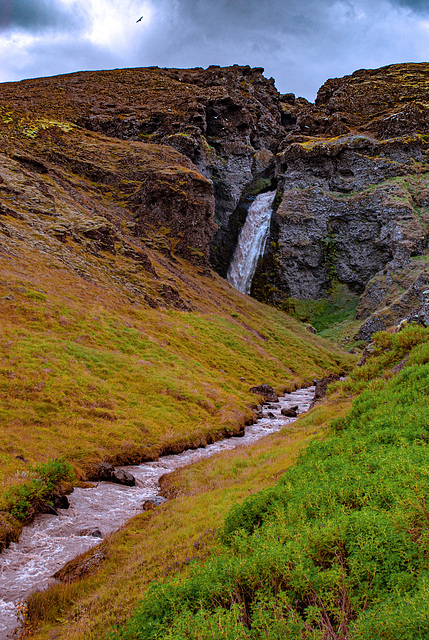 Svartifoss (Black Falls) is a waterfall in Skaftafell National Park, and is one of the most popular sights in the park. It is surrounded by dark lava columns, which give rise to its name. The hexagonal columns were formed inside a lava flow which cooled extremely slowly, giving rise to crystallization. Svartifoss drops from the edge of a broad columnar basalt cliff which looks like the round wall of an amphitheatre. It has become the symbol of Skaftafell National Park.

, ivanhoe, have particularly liked this photo