Some animals they should not sell for cooking!!! The Friday Mosque in Herat Watch vendor in his small shop Scenes from Afghanistan Father and son in Herat Mustang City, the hidden kingdom in Nepal The King His Royal Highness Jigme Palbar Bista Tsarang in Lo Mantang NyiLa (pass) 3950 m in Lo Mantang The "Nāga" gate into the Gopura on the third level Prasat Khao Phra Vihaan, Cambodia Third level of the Prasat Khao Phra Vihaan Prasat Khao Phra Vihaan is a Holy Cambodian nation… to all our Ipernity friends and contacts Our group and some lovely ladies The last Chorten The stone bath Traditional Bhutanese farm house Invited from a Yak herders family In front of the Yak herders hut Herders mother and her daughter Jangothang the Chomolhary sanctuary Meeting a caravan Wat Phu in Champasak, Laos The Mekong divides Laos and Cambodia Shwe Nandaw Kyaung Temple in Mandalay, Burma Fishing boats in sunset on the Irrawaddy, Burma By the riverside of the Irrawaddy river, Burma At the Shwedagon Pagoda, Rangoon, Burma Portrait of a Legong dancing girl People in their traditional dress on Bali Burmesian girls weaving The junk called June Hong Chian Lee A small lake outside Loei, northern Thailand Small Lao girls like to be photographed Khone Falls in Laos Kwan Phayao Lake, Thailand Mueang Pilok, Thailand Passenger in a regional train, Thailand Sunset at the Andaman Sea, Burma Pyi Daw Aye Pagoda, Kawthaung, Burma Small island at Mergui Archipelago, Burma Ko Chang, Thailand The Twelfe Apostels, Victoria, Australia Silhouettes of temples on Bali

View from the hill to Baan Nongsa in Champasak, Laos 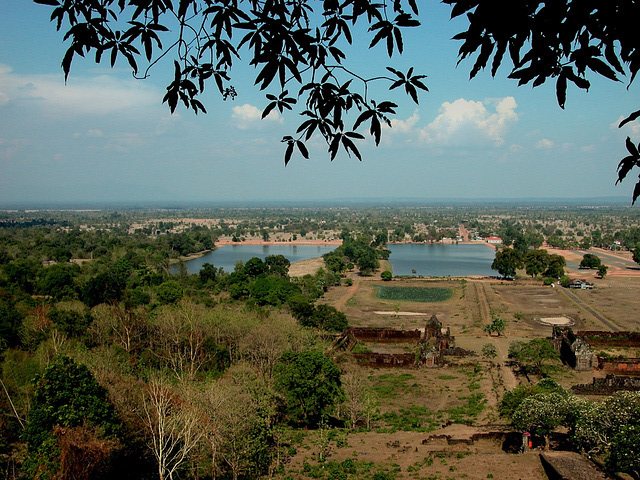 In this photo, looking east from the sanctuary partway up the mountain, we see the temple's causeway, which runs east-southeast and terminates in two grand barays (excavated reservoirs). The "middle baray," seen end-on in this photo, measures 200x600 meters. Its great length recedes much further into the distance than one can accurately judge here, being approximately equal to the distance from its near bank to the base of the mountain. The north baray (photo left) is wider, and lies due east of the sanctuary. The barays were probably built by Suryavarman II (1113-1150).

One asks why the axis of the temple is south of due east, and why the two barays are situated as they are. The answer lies in astronomy: the barays were designed to reflect the image of the sun, from the middle baray at the vernal equinox, and from the north baray at the summer solistice.
Suggested groups:
Comments