View from the hill to Baan Nongsa in Champasak, La… Some animals they should not sell for cooking!!! The Friday Mosque in Herat Watch vendor in his small shop Scenes from Afghanistan Father and son in Herat Mustang City, the hidden kingdom in Nepal The King His Royal Highness Jigme Palbar Bista Tsarang in Lo Mantang NyiLa (pass) 3950 m in Lo Mantang The "Nāga" gate into the Gopura on the third level Prasat Khao Phra Vihaan, Cambodia Third level of the Prasat Khao Phra Vihaan Prasat Khao Phra Vihaan is a Holy Cambodian nation… to all our Ipernity friends and contacts Our group and some lovely ladies The last Chorten The stone bath Traditional Bhutanese farm house Invited from a Yak herders family In front of the Yak herders hut Herders mother and her daughter Jangothang the Chomolhary sanctuary The Mekong divides Laos and Cambodia Shwe Nandaw Kyaung Temple in Mandalay, Burma Fishing boats in sunset on the Irrawaddy, Burma By the riverside of the Irrawaddy river, Burma At the Shwedagon Pagoda, Rangoon, Burma Portrait of a Legong dancing girl People in their traditional dress on Bali Burmesian girls weaving The junk called June Hong Chian Lee A small lake outside Loei, northern Thailand Small Lao girls like to be photographed Khone Falls in Laos Kwan Phayao Lake, Thailand Mueang Pilok, Thailand Passenger in a regional train, Thailand Sunset at the Andaman Sea, Burma Pyi Daw Aye Pagoda, Kawthaung, Burma Small island at Mergui Archipelago, Burma Ko Chang, Thailand The Twelfe Apostels, Victoria, Australia Silhouettes of temples on Bali Market-woman steering her boat on the Hậu Giang ri… 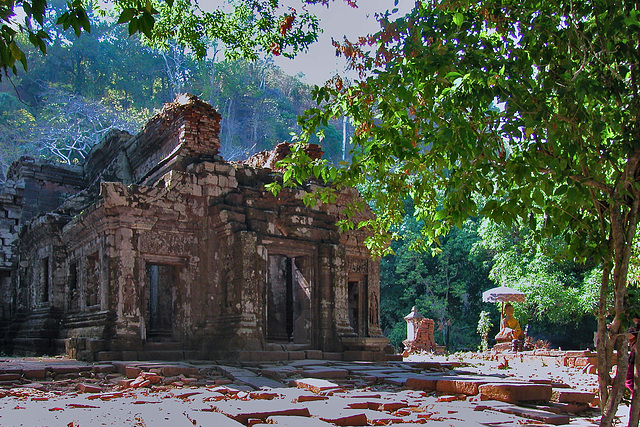 From there the sacred stream flowed down the artificially terraced mountain slope into two sacred reservoirs or barays and finally into the Mekong River, whose life-giving waters were believed to sustain the whole of the ancient Khmer Empire. Standing structures within the temple complex include quadrangles, a Nandin Hall, small pavilions, brick towers, stairways and the main shrine, which was dedicated to Shiva.
This Wat is the most important attraction of South Laos, although it is not Laotian in origin. Wat Phou was built by the Khmer.
Despite of being smaller, Wat Phou can be compared to Angkor. Not only has it been built in the same style; it also exudes the same atmosphere of an ancient city lost in the jungles for uncounted centuries. While the structures themselves are overpowering, it's the jungle overgrowth that creates a particular charm, at Angkor as well as Wat Phou. The Wat has stood unused for centuries because it has been built as a Hindu, not a Buddhist temple.
Wat Phou is older than Angkor. It was founded in the first decades of the 9th century by Jayavarman II, the first king of an independent Khmer nation. Before Jayavarman II, the Khmer were ruled by the Javanese (Indonesians). For some time Wat Phou served Jayavarman II as Khmer capital.
Though Jayavarman II soon moved his government to the Angkor plain, Wat Phou remained an important pilgrim's destination for the entire Angkor era (about 600 years).