to all our Ipernity friends and contacts Our group and some lovely ladies The last Chorten The stone bath Traditional Bhutanese farm house Invited from a Yak herders family In front of the Yak herders hut Herders mother and her daughter Jangothang the Chomolhary sanctuary Meeting a caravan Chomolhari (7314 m?) Chomolhari peak (7314 m?) The young Paro river and the Chomolhari Herds woman and her baby Farmhouse at the Paro riverside Across the Paro river Mother with her child A checkpoint on the way to the Chomolhari Passing the Chorten in the clockwise direction Drukgyel, the starting point of our trek Archery in Drukgyel Kyichu Lhakhang temple in the Paro Valley Spin the prayer wheel Third level of the Prasat Khao Phra Vihaan Prasat Khao Phra Vihaan, Cambodia The "Nāga" gate into the Gopura on the third level NyiLa (pass) 3950 m in Lo Mantang Tsarang in Lo Mantang The King His Royal Highness Jigme Palbar Bista Mustang City, the hidden kingdom in Nepal Father and son in Herat Scenes from Afghanistan Watch vendor in his small shop The Friday Mosque in Herat Some animals they should not sell for cooking!!! View from the hill to Baan Nongsa in Champasak, La… Wat Phu in Champasak, Laos The Mekong divides Laos and Cambodia Shwe Nandaw Kyaung Temple in Mandalay, Burma Fishing boats in sunset on the Irrawaddy, Burma By the riverside of the Irrawaddy river, Burma At the Shwedagon Pagoda, Rangoon, Burma Portrait of a Legong dancing girl People in their traditional dress on Bali Burmesian girls weaving 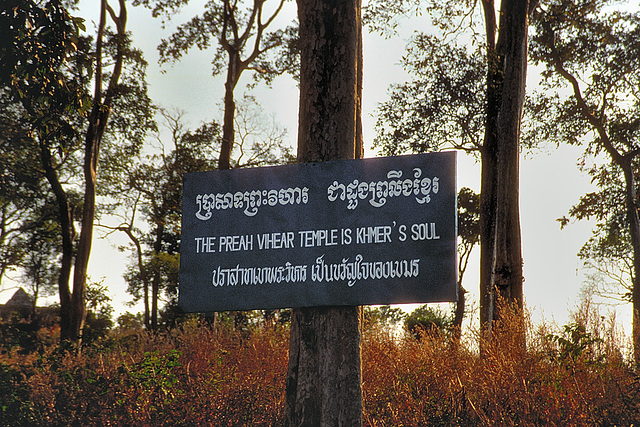 In modern times, the temple's location on the border between Cambodia and Thailand led to a dispute over ownership. In 1954, Thailand formally occupied the temple. In 1959, Cambodia applied to the International Court of Justice in the Hague to rule that the temple lay in Cambodian territory. In subsequent proceedings before the court, Cambodia based much of its case on a map drawn up in 1907 by French officers, some of whom had been part of a 1904 joint border demarcation commission formed by Thailand, then known as Siam, and the French colonial authorities then ruling Cambodia. The map showed the temple as being in Cambodia and was sent to the Siamese authorities as part of formal border demarcation activities. Over the subsequent five decades, in various other international forums, according to Cambodia, the Siamese/Thai authorities did not formally object to the map’s depiction of the temple’s location. Nor did the Siamese object when a French official from the colonial administration received the Siamese scholar and government figure Prince Damrong at the temple in 1930.
Thailand counter-argued that the map was not an official document of the 1904 border commission. It also noted that the mutually accepted principle governing demarcation by that commission was that the border would follow the watershed line along the Dângrêk mountain range, which the Thais said would put the temple in Thailand. Thai authorities never felt the need to formally object to the map, the court was told, because they had practical ownership of the temple. Any acceptance of the map, the court was informed, was based on a false understanding that it followed the watershed line.
On June 15, 1962, the court ruled that through its long lack of objection and its accepting and benefiting from other parts of a border treaty that grew from the 1904 commission's work, Thailand had in effect accepted the 1907 map, overriding any question of the watershed line, and that the temple belonged to Cambodia. The court declined to take up the question of whether the border as mapped in the vicinity of the temple corresponded to the watershed line. Thailand accepted the court's decision, but many Thais continue to believe that the decision was unfair. The accepted border line now passes just a few meters from the base of the southern steps.