The King His Royal Highness Jigme Palbar Bista Tsarang in Lo Mantang NyiLa (pass) 3950 m in Lo Mantang The "Nāga" gate into the Gopura on the third level Prasat Khao Phra Vihaan, Cambodia Third level of the Prasat Khao Phra Vihaan Prasat Khao Phra Vihaan is a Holy Cambodian nation… to all our Ipernity friends and contacts Our group and some lovely ladies The last Chorten The stone bath Traditional Bhutanese farm house Invited from a Yak herders family In front of the Yak herders hut Herders mother and her daughter Jangothang the Chomolhary sanctuary Meeting a caravan Chomolhari (7314 m?) Chomolhari peak (7314 m?) The young Paro river and the Chomolhari Herds woman and her baby Farmhouse at the Paro riverside Across the Paro river Father and son in Herat Scenes from Afghanistan Watch vendor in his small shop The Friday Mosque in Herat Some animals they should not sell for cooking!!! View from the hill to Baan Nongsa in Champasak, La… Wat Phu in Champasak, Laos The Mekong divides Laos and Cambodia Shwe Nandaw Kyaung Temple in Mandalay, Burma Fishing boats in sunset on the Irrawaddy, Burma By the riverside of the Irrawaddy river, Burma At the Shwedagon Pagoda, Rangoon, Burma Portrait of a Legong dancing girl People in their traditional dress on Bali Burmesian girls weaving The junk called June Hong Chian Lee A small lake outside Loei, northern Thailand Small Lao girls like to be photographed Khone Falls in Laos Kwan Phayao Lake, Thailand Mueang Pilok, Thailand Passenger in a regional train, Thailand 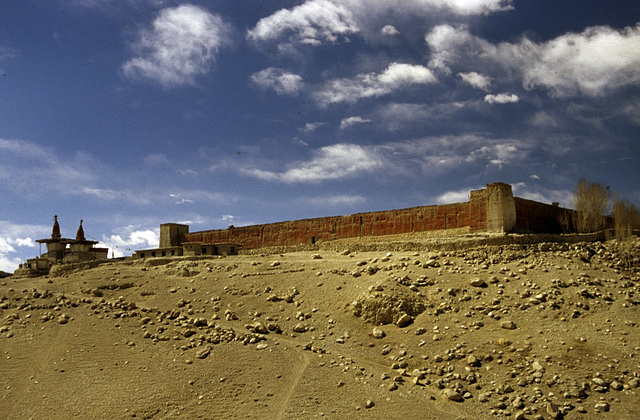 A Short History of Mustang

Mustang is an ancient kingdom with a colorful past. First mentioned in Ladakhi records in the seventh century, Mustang shared much of its history with Tibet to the North. Buddhism came to Mustang at about the same time as to the rest of Tibet. Legend says that before Padmasambhava (the founder of Tibetan Buddhism) could complete construction of Tibet's oldest monastery, Samye, he had to build the temple in Lo Ghekar in Mustang (see legend in the introduction). By the fourteenth century the great warrior Ame Pal became the ruler of Mustang and ushered in Mustang's golden age, which lasted for the next 200 years. Ame Pal built the majority of the capital city of Lo Manthang, including the palace and the four great temples in Lo Manthang. He also convinced the renowned Lama Ngorchen Kunga Sangpo, of the Sakya sect of Buddhism in Tibet, to come to Mustang numerous times in his lifetime. Lama Sangpo's attentions spawned an age of spiritual enlightenment in Mustang, resulting in the building of the many temples and monasteries that dot the Kingdom. By the fifteenth century Mustang had become a central power in Tibetan Buddhism.

The Mustang region is relatively low lying and an easily traveled corridor through the Himalaya. The religious revival that occurred during the 15-16th centuries was coupled with the acquisition of great wealth resulting from the control that Mustang exercised over the salt (from Tibet) for grain (from Nepal/India) trade through the Mustang Valley. This did not go unnoticed by Mustang's neighbors and Mustang was continually at war during the 17-18th centuries. The main aggressor was the kingdom of Jumla to the southwest (south of the Himalaya in present day Nepal). Jumla managed to takeover Mustang only to be repelled when Ladakh (due west of Mustang in the Indian Himalaya) and Parbat (due south of Mustang in the Himalayan foothills) came to Mustang's defense. In 1719 Jumla even kidnapped for ransom the future queen (from Ladakh) on her way to marry the king of Mustang. Jumla finally took over Mustang in 1740, but it was again to be a short-lived victory. Forty years later, Prithvi Narayan Shah of Gorkha (to the southeast) conquered Jumla and laid claim to Mustang. Although Mustang was forced to pay tribute for protection, they regained a large measure of autonomy. Prithvi Narayan Shah went on to conquer much of what is now modern Nepal.

Mustang remained subjugate to the Shah dynasty through to the Chinese occupation of Tibet. Mustang requested allegiance and protection from the partially democratized government of Nepal during the occupation of Tibet and became an official part of Nepal in doing so. The now safe Mustang valley became home to over six thousand Khampa (Tibetans from the Kham region of eastern Tibet) resistance fighters. The resistance forces in Mustang waged a guerrilla war against the Chinese and were moderately successful in destroying communications and roads in the Tibetan regions around Mustang. Political pressure from China forced Nepal to take action and Mustang was closed in an effort to alienate the resistance army. This was only marginally successful in slowing the advances of the Khampa, but resulted in extreme hardships on the people and lands of Mustang to support this vast army. Many valuable religious items were seized from the local population and temples and sold in the world market to finance the continuing struggle against the Chinese occupation forces. The resistance finally came to an end in the early 70's when the Dalai Lama (the historic religious leader of Tibet) sent a taped plea for an end to the violence. This was followed by a brutal military campaign by the Nepalese government to drive the Khampa from Nepal.

Efforts to develop Mustang since the end of the Khampa resistance have been sporadic and largely damaging to the Tibetan Buddhist culture of Mustang. The government of Nepal attempted to integrate Mustang by sending Hindu teachers, police, and aid workers who taught only Hindu and western beliefs, language, and culture. This was coupled with numerous ineffective attempts to bring electricity to Mustang. Only recently has Mustang become open to foreigners and now faces an additional set of challenges in the integration of western ideas. Tourism is a mixed blessing for Mustang. While it may be damaging by exposing Mustangis to the vastly differing lifestyles and values of the modern world, it also has spawned genuine interest in the unique people, temples, and landscape of Mustang. Recently, foreign aid groups have: Funded a school in the capitol city of Lo Manthang that teaches the traditional Mustangi culture, begun preservation efforts on very poorly cared for temples and monasteries, and built medical facilities. The people of Mustang (the Lo-pass) have always had to adapt to survive in the arid environments of Mustang and they will undoubtedly continue to meet these new stresses on their traditional culture with the religious fervor, tenacity, and keen business sense for which they have been recognized for centuries.