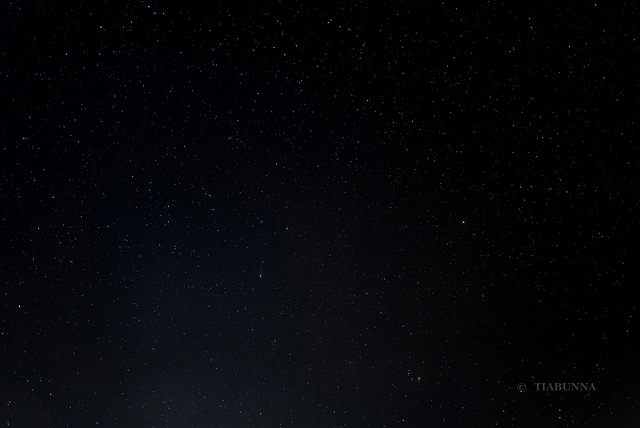 This needs to be viewed large on black. Even then. it may be difficult to find the comet on this image of the night sky, so I've put a 'note' just below the centre to identify it. For even better viewing of the comet, I've added a cropped image in the PiP at top left (and below), which should help those using phones.

This comet (official title C/2020_F8_SWAN) was discovered in late March. It is not yet visible to the naked eye, so I had to take bearings to find it for this image. Then it was a matter of rising at 0400 on a chilly Autumn morning to catch it just above the eastern horizon before sunrise. It soon will become brighter, but the coming full moon will create sighting difficulties before it passes below the southern hemisphere horizon. Maybe those of you in the north will have a better view later in May. For information on its position, I highly recommend the Heavens Above website.

Taken using the 'Astrotracer' feature on the Pentax K1, to enable long exposure tracking. And, after all that, why not a musical link. :-) 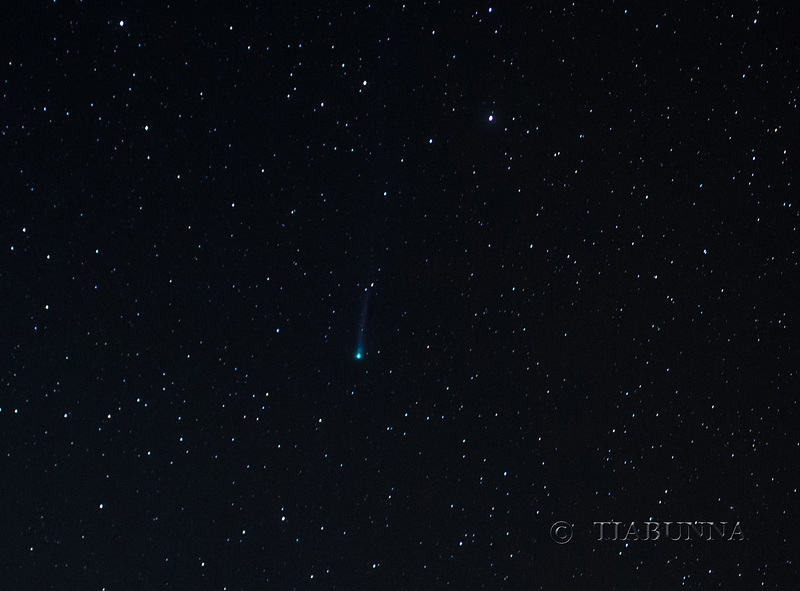 What an amazing capture. It's so clear in the sky. Your early rising paid off. Thanks for the website info. too. Have a good day and stay safe.
18 months ago. Edited 18 months ago. | Permalink

Amazing all these stars !!
18 months ago. | Permalink

Admired in:
www.ipernity.com/group/tolerance
18 months ago. | Permalink

Congratulations George for this and the close up of this comet. I have not seen it at all but then we have significant light pollution from near my home where I am in some isolation still. And there I was patting myself on the back because I got a nice moon picture last night :)
Thanks too for the info here which on looking deeper says this is best observed from your Southern hemisphere.

Thank you, Herb. You're probably too far north to see it now, but in about a fortnight I think it should appear up your way. Check out the "heavens-above.com" website and fill out all the relevant details for where to look.
18 months ago. | Permalink

what a precious moment, very well captured !!!
18 months ago. | Permalink

Wonderful night photography, George. My brother does a lot of astral photography and has a lot of specialized equipment for it. I'll have to ask him if he's planning on photographing this comet.
18 months ago. | Permalink

Thanks for your visit and for all the comments and faves.
18 months ago. | Permalink

Have a good, safe and healthy day.
18 months ago. | Permalink

Superb images George, thanks for the info and the musical link ;-))
18 months ago. | Permalink

These are fabulous and fascinating pictures, George!
18 months ago. Translate | Permalink

It should be just above the horizon here, will keep trying getting it
18 months ago. | Permalink
tiabunna club
has replied to Ko Hummel club

I think it's probably a little too far south at present Ko, but it should appear in a week or two.
18 months ago. | Permalink
Ko Hummel club
has replied to tiabunna club

you are right, but I will try tomorrow morning. Shortly before sunrise it might be possible. Will give it a try. I cannot reach it with the telescope but my Tamron 50-200 mm will be fine
18 months ago. | Permalink

"Space: the final frontier. These are the voyages of the starship Enterprise. Its five-year mission: to explore strange new worlds. To seek out new life and new civilizations. To boldly go where no man has gone before!" :-))
18 months ago. | Permalink

Fabulous! I don't think I have a chance to see it here, too many buildings in the way:-(
The comet is quite recognizable even in the main photo, it's colour appears different from the stars.
18 months ago. Edited 18 months ago. | Permalink

A very nice picture, and great technical skill to get it!

No doubt it won't be visible to us in the north, as I have heard nothing of it yet.

Thank you very much, Peter. I think there's a good chance you'll see it if you can find a good site - keep an eye on the "Heavens-above" website link I've included and it should show there in a little over a week.
18 months ago. | Permalink