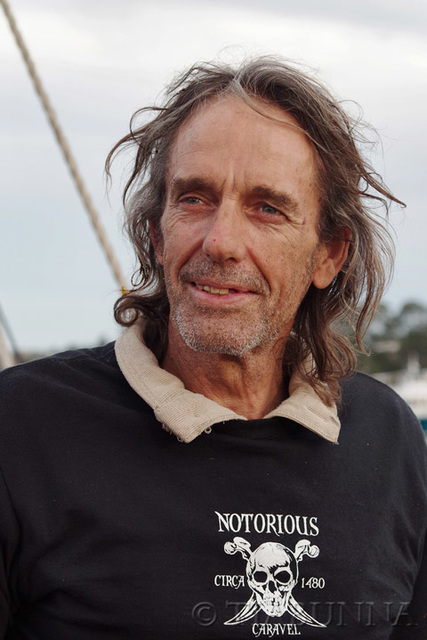 See note at top left for a photo of the "Notorious"

I met Graeme while inspecting the replica 15th century Portuguese caravel visiting Batemans Bay. Ships to this design were used by Columbus in 1492 and (almost certainly) by Cristóvão de Mendonça to sail down Australia's east coast in the early 1500s.

The ship itself is (to use a much over-used term) truly awesome. Three hundred tonnes of reclaimed timber were used in the project: the ship is 17 M long, with a beam of 5.5M and a draft of 2.1M. Its displacement is 55 tonnes. Everywhere there are huge hand adzed logs and other interesting details. It is about as authentic as would be possible.

And here's the part that totally impressed me: Captain Graeme researched, designed and built it himself! The project took ten years and the ship was launched in early 2011. What a colossal project, one has to be staggered at that kind of commitment, though when I mentioned that to Graeme he modestly said that he'd had the assistance of several friends. Well, I take my hat off to you!

Graeme kindly agreed to be 22 in my 100 strangers project. Find out more about the project and see pictures taken by other photographers at the 100 Strangers Flickr Group page

You can read more about the 'Notorious' and its doings here: www. facebook.com/notorioustheship

TOTALLY AWESOME. The portrait is just GREAT and shows Graeme's personality so well. The story is incredible and I showed the ship and Graeme's picture to my husband to let him see while I told him about the boat. Really cool. I'm so impressed. All that and you're doing a 100 Strangers project! FANTASTIC!! I have been wanting to try that, but it will have to be down the road a bit. Great job on this!!!!
7 years ago. | Permalink
tiabunna club
has replied to Janet Brien club

Thank you very much, Janet. Yes, as you may gather I also was very impressed. The "100 Strangers" project is the main reason I'm keeping a small presence in f****r, although I'm not in a rush I'd like to reach the target - and unfortunately the equivalent group isn't running strongly here.
7 years ago. | Permalink

Such an amazing gentleman! This is an incredible story of commitment, resolve, and modesty. I am totally in awe!!! Your 100 Strangers Project is a fantastic project and I cannot wait to see and learn about your other participants. Wow!
7 years ago. | Permalink
tiabunna club
has replied to Kathleen Thorpe club

Thank you Kathleen, yes I'm also most impressed. I've written more above about my '100 Strangers' project - but I'm gradually bringing my earlier 'Stranger' shots into my photo stream here. It's an interesting project and one I'd recommend to anyone, not least because it makes the participants step outside their normal 'comfort zone' . :)
7 years ago. | Permalink

Truly interesting face and story. Like the others amazing commitment.
7 years ago. | Permalink
tiabunna club
has replied to Gsddusty

Way more than most people could manage, I think.
7 years ago. | Permalink

Graeme and the ship share a fascinating story, and I love this characterful portrait. Great light, detail and colour.
7 years ago. | Permalink
tiabunna club
has replied to Gillian Everett club

Thank you very much, Gillian. The 'Notorious' now is heading south and today reached Twofold Bay.
7 years ago. | Permalink

A would say, a perfect portrait.
Details, colour, everything is here.
Great work.
7 years ago. | Permalink
tiabunna club
has replied to Rita Guimaraes

Thank you, Rita.
7 years ago. | Permalink