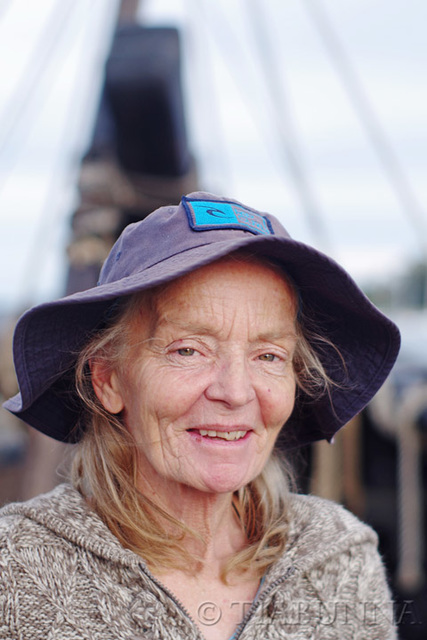 There's nothing like a good dose of amazement. I had mine today when I drove across our local bridge and found myself looking at a 15th century Portuguese caravel sailing ship. It rated about 9.99 on a scale of ten!

So I hurtled home for camera gear, then back to the wharf where I found a crowd of people waiting to board and inspect the ship. It is a replica of the type used in 1492 by Columbus to cross the Atlantic and (almost certainly) by Cristóvão de Mendonça to sail down Australia's east coast in the early 1500s. You can read more about it here: www. facebook.com/notorioustheship

At the top of the ship's ladder I met Felicite, the wife of the Captain and builder, collecting a very modest visiting fee and finding a seemingly endless tolerance to chat with all who came aboard (most asking much the same questions). I ran past her the idea of being in my "100 Strangers" project and she happily agreed.

Thank you very much for being so friendly and interesting, Felicite: I hope you like your portrait. This picture is 21 in my 100 strangers project. Find out more about the project and see pictures taken by other photographers at the 100 Strangers Flickr Group page

NB that, for manual lenses, the FL needs to be entered directly on the Pentax - I forgot to change it (EXIF shows 85mm) but this was taken with the SMC Pentax 50/1.4.

Excellent...
7 years ago. | Permalink
tiabunna club
has replied to Dynamo

Thank you AJ.
7 years ago. | Permalink

Thank you very much, Peter.
7 years ago. | Permalink

Thanks Bob. She was rather busy welcoming people coming aboard the ship, but from a brief chat I'd think an extended talk would be interesting indeed.
7 years ago. | Permalink

Fantastic portrait, and what a wonderful, exciting story!!!! So glad you got to visit and get these wonderful pictures! :) Outstanding, from the photography to your article and everything in-between!
7 years ago. | Permalink
tiabunna club
has replied to Janet Brien club

Thank you very much for your kind comments, Janet.
7 years ago. | Permalink