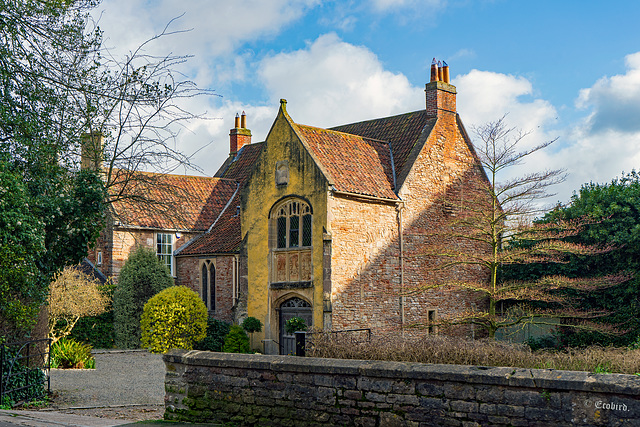 The Rib at Wells is a former canonical detached early 15th Century dwelling and is a grade II listed building beacause of its architectural and also it's historical importance as a surviving purpose built canonical house for Wells Cathedral. Originally one of three houses known as the Bishop's Ribs it is the only one to survive and was built using local sandstone. It incorporates a porch built for Canon Walter Osborne between 1464 -1484, that bears the initials W and O.

It was the childhood home of the acclaimed Edwardian novelist Elizabeth Goudge whose father was a vice principal of the theological college but is now in private ownership.

Elizabeth referred to the Rib as the house with the cathedral in the back garden.

HFF and a good weekend to everyone.

Suggested groups:
71 comments - The latest ones

Peter Castell club
A wonderful house I wonder what the interior is like ? the design was influenced by church design
HFF Carol I hope you have a pleasant weekend
2 months ago. | Permalink
Ecobird club has replied to Peter Castell club
Thank you very much Peter. I found this feature from some time ago which may interest you. It stated 14th century but I understand this was because the hall featured materials from the 14th Century but the main building was early 15th Century.

HFF and have a good weekend
2 months ago. | Permalink

Roger (Grisly) club
Excellent set of interesting images and I particularly like the composition to the main capture. Wells is such a fascinating little city.
Wish you HFF and a good weekend.
2 months ago. | Permalink

Thank you posting your image in the group
www.ipernity.com/group/west.of.england
2 months ago. | Permalink

tiabunna club
A lovely set of images of these impressive old buildings, plus interesting information, Carol. HFF, stay safe and best wishes for the weekend.
2 months ago. | Permalink

Annalia S. club
Wonderful series, Carol! I love the light and colors in your main image and particularly like the tree that seems to "melt" into the sandstone wall. Lovely work on all the other pics too!

HFF and I wish you a really nice weekend!
2 months ago. | Permalink

HFF and have a good and safe weekend,
2 months ago. | Permalink

Chris10 club
Nice HFF-day for you and your picture Carol!

Loose_Grip club
Lovely patina on the front of the building. Great PiPs.
HFF & have a great weekend.
2 months ago. Edited 2 months ago. | Permalink

Rainer Blankermann club
A beautiful series. I mean, the old brick buildings have a special charm!
HFF and have a nice weekend, Carol. Stay healthy.
2 months ago. | Permalink

Ulrich John club
A very nice building, Carol ! Nicely presented ! HFF and a good weekend for you !
2 months ago. | Permalink

Herb Riddle club
Ah I have seen these houses for real too. Some years back now. A great series here Carol. Well done.

A very nice set of pictures here which I like a lot.

I could have sworn that Rosa had been there too.... I remember something similar in her gallery!

Roger Dodger club
HFF Carol; a nice series of Wells images, I have very much enjoyed a few visits to Wells in the past, a good reminder!
2 months ago. | Permalink

Sarah P. club
Dear Carol, I started to read this and thought, oh, Wells, I wonder if that could have possibly been the home of ... and then you answered my thought.
I must be one of the few remaining fans of Elizabeth Goudge. I literally have just about every book she ever wrote. I read one of her children's books when I was a child myself, and much later found out from her autobiography that it was one of her favorite books.
Thank you so much for sharing these images, wonderful to see such great pictures of the place she grew up and wrote about.
2 months ago. | Permalink

Admired in:
www.ipernity.com/group/tolerance
2 months ago. | Permalink

Nick Weall club
Nice little series Carol, I like Wells but haven't been there for many years. HFF & Hanwe
2 months ago. | Permalink

Amelia Heath club
This is absolutely stunning. We have been to Wells, but haven't seen this little gem.
A very belated HFF, Carol.
2 months ago. | Permalink

Christa1004 club
Beautiful framing on this old building, lit with soft light! The charm of old stones... Also thanks for the PIPs with the other views. Belated HFF and a nice weekend for you, Carol.
2 months ago. | Permalink

Karen's Place club
What a fascinating place and a gorgeous series of images, Carol. The golden color on the front is really interesting.

I'm enjoying the song right now. I hope you have a nice week ahead. :)
2 months ago. | Permalink

Doug Shepherd club
A wonderful series of beautifully composed and detailed architectural images Carol. The warm tones of the honey coloured stone in the main images is quite special. Thanks for the interesting historic notes.
7 weeks ago. | Permalink