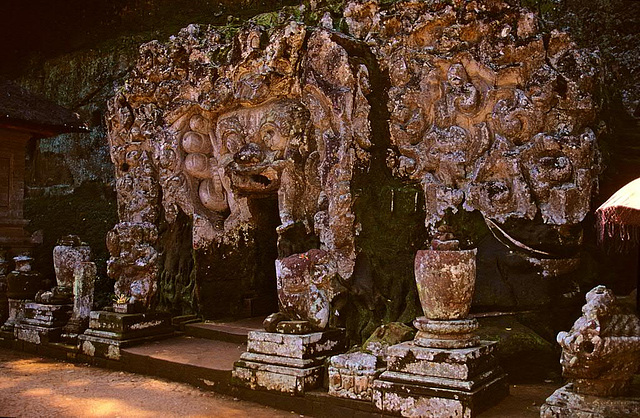 A short distance from Bedulu stands the mysterious Goa Gajah or Elephant Cave. A fantastically carved entrance depicts entangling leaves, rocks, animals, ocean waves and demonic human shapes running from the gaping mouth which forms the entrance to the cave.
The monstrous Kala head that looms above the entrance seems to part the rock with her hands. Similarly decorated hermit cells are also found in Java. The large earrings indicate that the figure is that of a woman.
Recent excavations carried out in 1954 unearthed bathing places in front of the cave with six female figures, representing. nymphs or goddesses holding water spouts. An energetic clamber down rocks and rice terraces fifty meters behind the cave leads to the fragments of a fallen cliff face with the enshrining two ancient Buddha statues.
An old Javanese chronicle written in 1365, some twenty years after the Majapahit conquest of Bali, says that one of the two Buddhist bishops in Bali at that time had his hermitage at Gwa Gajah, the "elephant river", which probably alludes to the Petanu River which flows nearby in its deep gorge.
However, Goa Gajah dates back certainly to the 11 th century. Whether it was originally a Buddhist or Hindu hermitage cannot be answered with certainty, for there are both Hindu and Buddhist sculptures inside or outside the cave. Perhaps monks of both religions had hermitages close to one another. In pre-Majapahit Java and Bali, the two religions, both influenced by Tantric beliefs and practices, had begun to amalgamate into what is called the Siwa- Buddha cult. Buddhist practices and doctrines survive to this day amongst a small segment of the Brahmana broken bas-reliefs of stupas and a tiny cavern priests who are mostly found in East Bali.
Suggested groups:
Comments