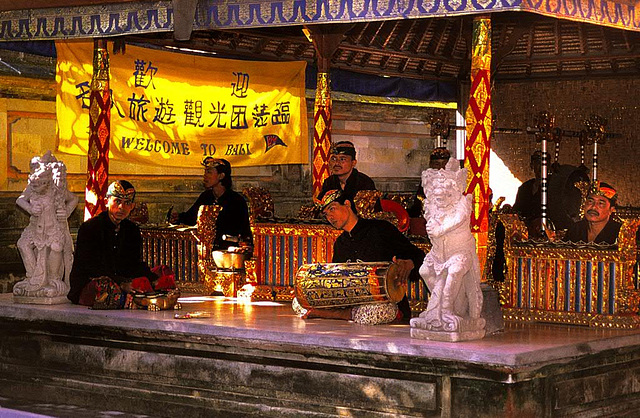 Gamelan is a kind of musical ensemble of Indonesia typically featuring a variety of instruments such as metallophones, xylophones, drums, and gongs; bamboo flutes, bowed and plucked strings, and vocalists may also be included. The term refers more to the set of instruments than the players of those instruments. A gamelan as a set of instruments is a distinct entity, built and tuned to stay together — instruments from different gamelan are not interchangeable.
The word "gamelan" comes from the Javanese word "gamel", meaning to strike or hammer, and the suffix "an", which makes the root a collective noun.
The German composer and conductor Eberhard Schoener arranged a meeting with Balinese Gamelan musician and created an amazing record called "Bali Agung". A hot tip to every body who is interested in music of mixed cultures.
Suggested groups:
Comments