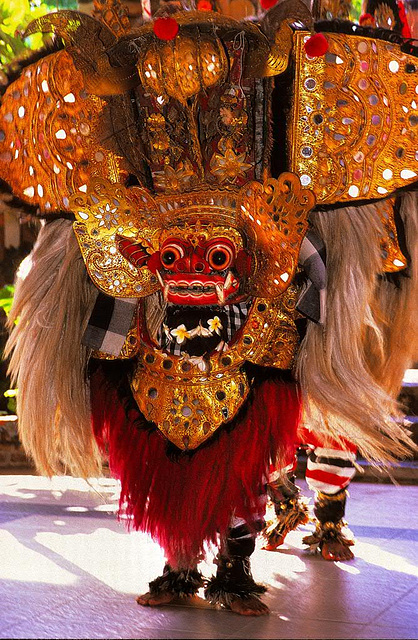 Barong is probably the most well known dance. It is also another story telling dance, narrating the fight between good and evil. This dance is the classic example of Balinese way of acting out mythology, resulting in myth and history being blended into one reality.
The story goes that Rangda, the mother of Erlangga, the King of Bali in the tenth century, was condemned by Erlangga's father because she practiced black magic. After she became a widow, she summoned all the evil spirits in the jungle, the leaks and the demons, to come after Erlangga. A fight occurred, but she and her black magic troops were too strong that Erlangga had to ask for the help of Barong. Barong came with Erlangga's soldiers, and fight ensued. Rangda casted a spell that made Erlangga soldiers all wanted to kill themselves, pointing their poisoned kris into their own stomachs and chests. Barong casted a spell that turned their body resistant to the sharp kris. At the end, Barong won, and Rangda ran away.
The masks of Barong and Rangda are considered sacred items, and before they are brought out, a priest must be present to offer blessings by sprinkling them with holy water taken from Mount Agung, and offerrings must be presented.

Eric.Pierre1708 has particularly liked this photo