Bali, its landscape and its old sovereign culture

next >
< previous
/
Close
Albums Album Photos See on the map Add a comment Most appreciated Most viewed Most commented
Normally I avoid traveling in tourist groups because every bodies interests are so much different that there always are heavy differences of opinions between the participators. Not so with Thai groups as they are educated to give more tolerance.

In May 2001 we booked and arranged a 4 day journey to Bali with a Thai tour organization and we were very satisfied with the company. But on the island Bali we were guided by the Indonesian (not Balinese indeed) Tour group company called BMW (not to confuse with the famouse Bavarian car manufacturer) who three times every day forced us into "Balinese Handicraft" Tourist shops for about 1 1/2 hours each shop. So we lost about 4 1/2 hours each day to see the paradisiacal island Bali.

Just short time before our return to Bangkok my wife and I decided to stay a week longer on Bali although our return flight ticket wasn't refundable. Some telephone calls to postpone important appointment made it possible to arrange our great idea.

Outside the airport we met a Balinese taxi driver who directly was ready to drive for us the whole week for a fair fixed price and to show us beautiful and interesting Balinese places, away from crowded tourist centers with their over charged tourist prizes - and a starting horror trip became a dream journey.

The best and very reasonable way to stay on Bali is to live in a Balinese private house. Many houses display a sign with "Home Stay". When I came to Bali first time 1978 I stayed their 6 weeks in a gorgeous Balinese house for 1 Dollar 80 each day (incl. a simple but delicious breakfast, but no electricity power).

Bali is one of the world's magical places. Even though it has been overrun by tourism development and population growth, somehow it has been able to maintain its unique character, though some parts of the island—Denpasar, Kuta Beach—are now incredibly degraded and depressing for those of us who knew Bali in the good old days.

Yes, Kuta and Nusa Dua represent the ugly faces of crass commercialism—but if they are developed as specific mass tourism enclaves and generate income, and if development in the rest of the island is more restrained, Bali will still be worth visiting. The flowers are still colorful, the smiles still warm, the rice fields still mesmerizing, and the gamelan music still a calming, soothing backdrop—after 30 years of rampant development.

Bali is a mixed bag of tourism projects that represent the absolute worst (Kuta) in sustainable travel and some of the best (Ubud).

In spite of the recent terrorist events, Bali is still an excellent destination. Magnificent rice terraced landscapes. Gentle, warm people. The culture is strong, vivid, and vibrant. Facilities are varied, catering to many tastes. However, beaches are not good, and the environment is under threat from destruction of reefs and mangroves, linear development, salt water intrusion, etc.
Normally I avoid traveling in tourist groups because every bodies interests are so much different that there always are heavy differences of opinions between the participators. Not so with Thai groups as they are educated to give more tolerance. In May 2001 we booked and arranged a 4 day journey to Bali with a Thai tour organization and we were very satisfied with the company. But on the island …  (read more) 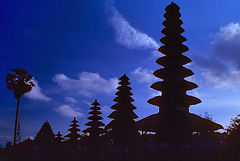 Silhouettes of temples on Bali

Bali is an island of temples. The Department of Religion has cataloged at least eleven thousand temples - small and large, local and regional. The Balinese call a shrine palinggih, which simply means "place" or "seat" and refers to any sort of temporary or permanent place toward which devotions and offerings are made. In no case is the shrine itself considered sacred; the shrine exists or is built as a residence for sacred, or holy, spirits - either ancestors or Hindu deities. Balinese temples are not closed buildings, but rectangular courtyards open to the sky, with rows of shrines and altars dedicated to various gods and deities. The gods are not thought to be present in the temples except on the dates of the temple's festivals, and therefore the temples are usually left empty. On festival days the congregation of each temple assembles to pray to and entertain the visiting deities. 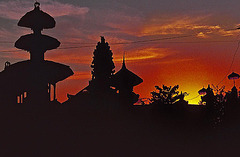 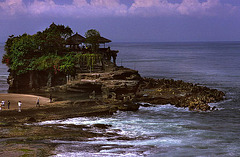 Tanah Lot, one of the most popular places of interest in Bali, is located on the coast of West Bali, at the village of Beraban in the Tabanan Regency. It is also called Tanah Let which means ancient land and also Tanah Lod, which means the land to the south. The temple Pura Tanah Lot, simple in its construction, is dramatic in its ocean-front location and is one of the main temples in the worship of Balinese gods. 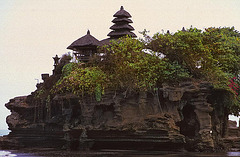 Tanah Lot has a long history in the world of tourism. The temple itself is built on a small promontory which is only accessible at low tide. During high water the rock takes on the appearance of a large boat at sea, such is its shape. Poisonous snakes live in the nearby caves to 'guard' the temple and contribute to the temple's dangerous reputation. It is advisable to avoid the tourist crush here as it can be severe. 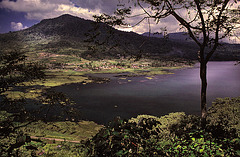 My starting point for the walk to the peak of the Batur volcano (three - four hours). 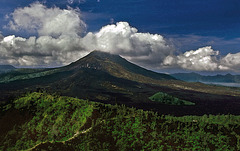 The historically active Mount Batur (Gunung Batur) is located at the center of two concentric calderas north west of Mount Agung, Bali, Indonesia. The south east side of the larger 10×13 km caldera contains a caldera lake. The inner 7.5-kilometer-wide caldera, which was formed during emplacement of the Bali (or Ubud) ignimbrite, has been dated at about 23,670 and 28,500 years ago. The SE wall of the inner caldera lies beneath Lake Batur; Batur cone has been constructed within the inner caldera to a height above the outer caldera rim. The Batur stratovolcano has produced vents over much of the inner caldera, but a NE-SW fissure system has localized the Batur I, II, and III craters along the summit ridge. Historical eruptions have been characterized by mild-to-moderate explosive activity sometimes accompanied by lava emission. Basaltic lava flows from both summit and flank vents have reached the caldera floor and the shores of Lake Batur in historical time. The caldera contains an active, 700-metre-tall stratovolcano rising above the surface of Lake Batur. The first historically documented eruption of Batur was in 1804, and it has been frequently active since then. 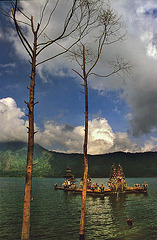 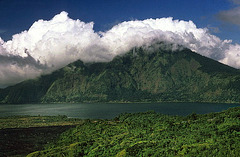 Mount Abang is an old 2,151 meter high volcano ('Red Mountain'), on the eastern side of the crater southeast of Penelokan, is the highest point on Batur's outer crater. 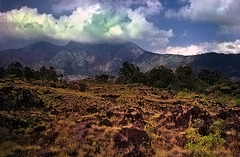 The way up to the Batur peak

Its advised to wear good shoes and warm clothes when you'll climb up to the peak. Once you've done it you'll have an unforgettable experience. 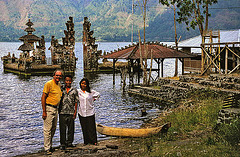 At the seaside of the Lake Batur

Capture with the self timer (myself Wolfgang, I Made and my wife Salama) 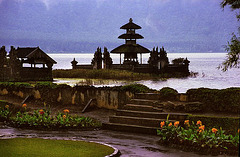 Bedugul, 18 km north of Denpasar and 1400 meters above sea level, is known for its excellent golf course. The three lakes of the area provide the water for the fields, rivers and springs on the plains below. Lush pine forests make for clean air. The area renowned for its fruit and vegetables. A beautiful sight is the "Ulun Danu" temple which seems to rise out of the lake. 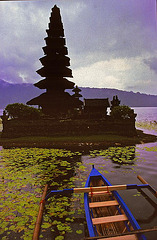 Located besides Lake Bratan, it is surrounded forested hills. A beautiful sight is the “Ulun Danu” temple which sems to out of the lake. 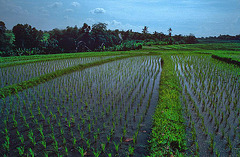 Rice is the staple food for Balinese people and planted in every corner all over the island. 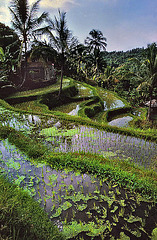 The fertile volcanic soil of much of the Indonesian archipelago - and particularly the island Bali - has made rice a central dietary staple. Steep terrain on Bali resulted in intricate cooperation systems, locally called subak, to manage water storage and drainage for rice terraces. 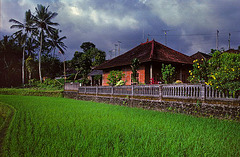 Country house of our "home stay"

"Home stay!, the most beautiful way to spend your holidays 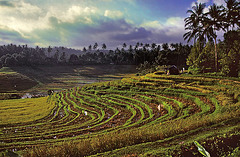 View beside the highway

Discovering the island Bali by bike or moped is one of the nice attractions you can do. Bali offers his amazing landscape around every corner. 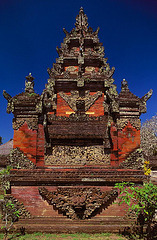 It is not surprising that Bali is called the island of the thousand temples. Everywhere you see a temple. There are so many temples that the Government does not bother to count them. There are small temples, very small temples with only a very few shrines; there are large temples, very large temples with more than 50 shrines, such as the Temple of Besakih , the mother temple of Bali. There are even lonely shrines on the oddest places where one does not expect them at all. Every family, every compound, every clan or society has a temple; you mention a society or organization and has a temple. In the compound where the family lives there is the family temple. 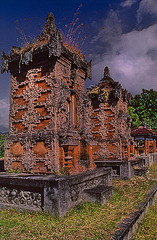 Bali is sometimes called the "Island of 10.000 Temples" (or "Island of the Gods") and this is not exaggerated.
65 items in total
Jump to top