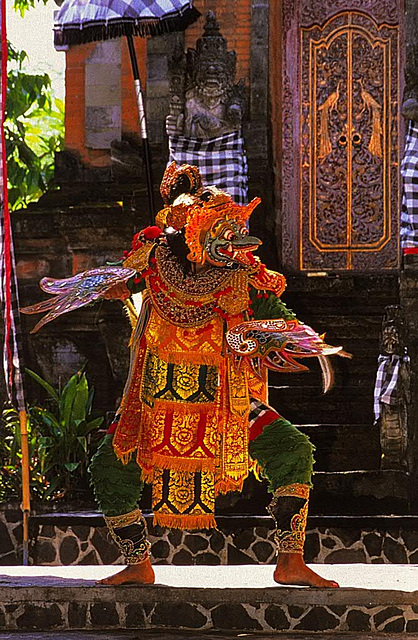 The following scene finds the poor prince tied to a tree at the cemetary, awaiting his death at the hands of the witch. The god Shiva however, has mercy on Sadewa, appears in the disguise of a priest (but flowers are thrown on the stage when he appears to indicate that he is in fact a god) and makes the prince immortal. When the student of the witch, who has followed him, notices this, she turns first into a boar, then into giant bird. Sadewa wins over both. But then the witch finally turns into Rangda, the evil of all creation. In order to fight her, Sadewa himself turns into the Barong (a kind of stylized lion) who represents the good powers. Rangda and the Barong fight, but as their powers are balanced, none of them can win.
Suggested groups:
Comments