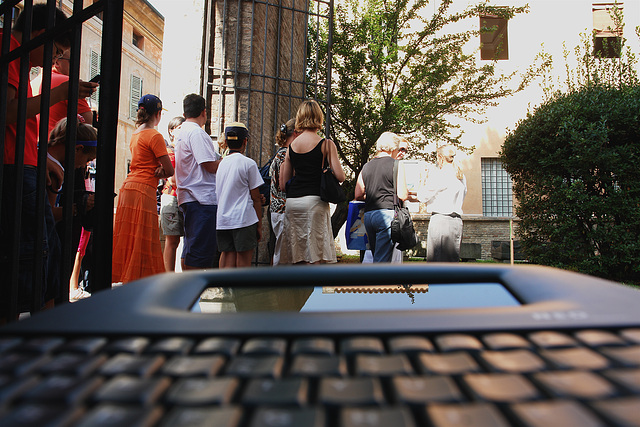 There’s a cue at the entrance of San Vitale and the mausoleum of Galla Placidia.

That gives me some leisure to finish the third part of my big phantasy novel. It is basically about the struggle between Good and Evil. There’s a lot of magic in it, and lengthy dialogues in the Language of Yore (perfunctorily translated in footnotes), and names you’ll never manage to pronounce right, and Earth Monsters who willingly serve the Bad King and who, eventually, must be defeated. The hero is an adolescent dwarf who, in the course of the story, grows to manhood, and learns to ride elves with pointed ears.
Well, I’m reluctant to betray too much; buy it as soon as it reaches your bookstore.

Once it is completed, there will be twelve volumes of at least 600 pages each. This is something I’ve learned from Joanne Rowling: never say there’ll only be seven volumes –that’s asking for trouble.
Suggested groups:
Comments

Remember Kees...Seth had deemed you a High Elf...so just write of your own adventures ;-))))
14 years ago. | Permalink