Latest posted Navigate on the map Photos with specific people Most appreciated Most viewed Most commented Search by keywords Search by date
See also... Kees'
favorite photos All the photos where
Kees appears 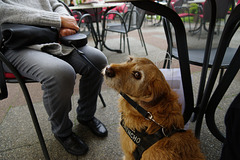 One big advantage of the place where we live is its proximity to Italy: In just a few hours we have crossed the borders to Austria and Italy. Vipiteno is more Sterzing than Vipiteno –the main language is German–, which means that we don't have the optimum Italian experience, but the ease of being able to speak German and be understood. Chencho would have preferred to stay home, but he made the best of it, and was adorable as always. 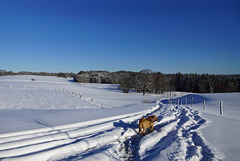 Dog in a Landscape 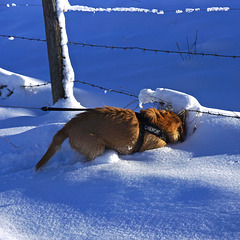 Chencho follows his nose, even if there seem to be good arguments against it. Chencho folgt seiner Nase, auch wenn das weniger ratsam erscheint. 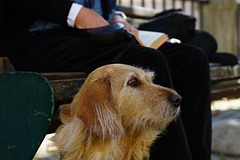 Chencho has little appreciation for human cultural achievements, but he accepts the inevitable. 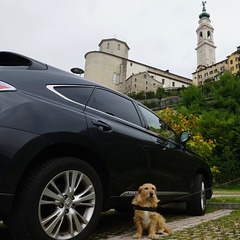 Visitors are encouraged to leave their cars in a large parking lot outside the town and reach the alta città by a series of long escalators. A practical (if ugly) solution for anyone who doesn't have to carry a dog of Chencho's weight. 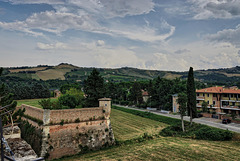 For vacation, I was looking for a small town similar to my beloved Sabbioneta and came up with another “ideal city”, built by Cosimo I de’ Medici. We found pretty unique lodgings in the castle overseeing the Porta fiorentina (the other town gate is called the Porta romana ), but its central piazza being occupied by workers on a big event, the circumstances were less than ideal, and we were forced to retire to adjacent Castrocaro most of the time. 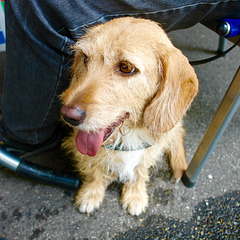 Whose picture is this? The dog’s? After all, he’s on it. But hey, I’m on it, too! At least, my left leg is. And the picture was taken with my (old) camera. So let’s summarize: my dog, my leg, my camera, my daughter. Yes, Cora took it, and did a very fine job, I think: Nobody has captured my leg better. © Cora, reproduced with her permission. 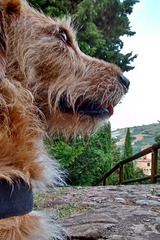 For a dog, it’s hard to prove that you’ve been somewhere if photos only show you sitting or lying between your people’s feet. So it’s good that the background features the famous baptistery of Castrocaro (which appears to be open once a year, and of course not while we were there). Sorry for the poor technical quality of this picture: I took it with my mobile phone which isn’t exactly state-of-the-art (and, for me, generally a low-priority item). 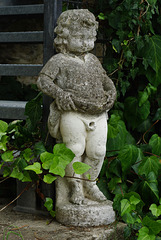 Picquoteaday #68 “Crabalocker fishwife pornographic priestess boy you been a naughty girl, you let your knickers down” – I Am the Walrus (Lennon/McCartney) I can’t really say why I associated this little statue, one time probably part of a fountain, with the song. “Naughty girl ? “ Knickers down ”? The only explanation I can offer isn’t very flattering: it could be my dirty mind... 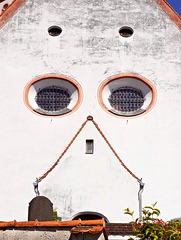 Every church has a façade, hardly any a face. 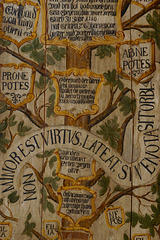 Picquoteaday #67 Non minor est virtus, lateat, sive nota sit orbi (Virtue isn’t any less, if it is hidden or if it’s known to the whole world). This is so true. No one needs to know that you’re the humblest man in the universe. Believe me. [picture taken in the Salesian convent of Beuerberg] 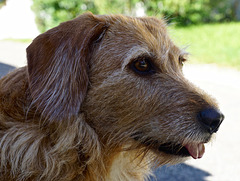 It’s no fun being harassed by a photographer, but what can a poor dog do? 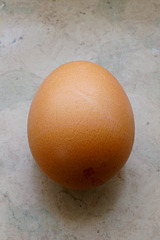 I’m reluctant to add paint to the "Best before..." date stamp of an egg, but I gladly wish my friends a Blessed Easter! (and one of them something more) 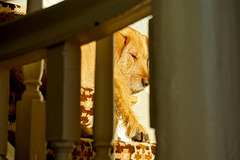 It must be pretty uncomfortable, lying on the stairs like this, but it happened to be the best place for sun-bathing, so what would a Spanish dog do? 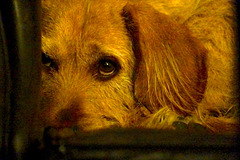 Chencho lying in an easy chair at our home base in the Netherlands, waiting for things to happen. So did I, as a matter of fact, though it may not have comforted him. At ISO 8000, you cannot seriously expect to take high-quality pictures, but sometimes you’re glad being able to take pictures at all. 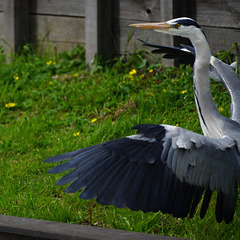 Of course, it’s actually only half a Heron, but one tries to make the best of what one’s got (I also have whole Herons in my portfolio, but I like the dynamics of this specimen, shot just before it could get away). In my youth, Herons could be found, but they seem to have been much rarer than today. They’re majestic birds, admirable to anyone who’s not a frog. 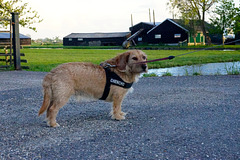 In Holland, once again.

Our base in Holland, Oostknollendam, is built along a levee, which means you can, from your front door, go to the right or to the left, and will have to return the same way you came. This time we had gone to the left. The lack of possibilities may explain why Chencho isn’t excited about our walks. And it shows. 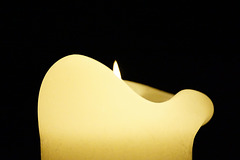 Being bored is an invitation to experimenting. So while I was sitting in my easy chair, and looking at the candle on the table before me, I decided to take a shot at it. The result I found to be rather interesting. Barely recognizable, but interesting.
1086 items in total
Jump to top