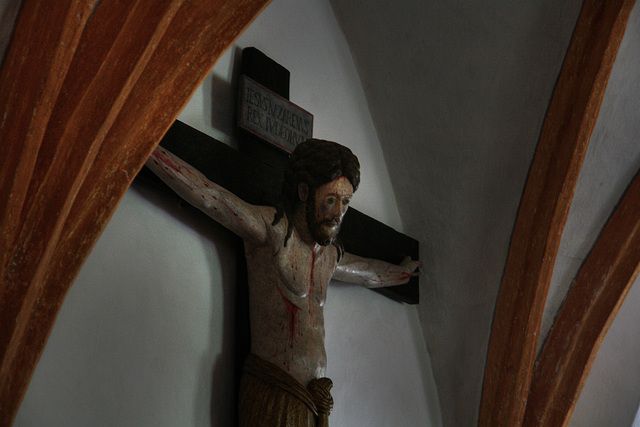 The cross itself isn’t original, nor is the paint on the Christ figure, but research of the material (basswood) surprisingly resulted in a date around 900 AD, centuries earlier than art historians had estimated. The C-14 method isn’t very precise, but a stylistic classification is outright hazardous: only very few comparable crucifixes have survived.

For a long time, the charwoman had complained about sawdust she had to clean up from under it: clearly, it was urgent to do something for its preservation. An exhibition, a couple of years ago, offered a good opportunity. A close examination revealed how old and rare it really was, and the Enghausen citizens feared it wouldn’t return to their church. Lucky for them, it did.
Translate into English

was hoping you'd post a pic of this! cool! and a great story too!
15 years ago. | Permalink

Thank you for inviting me; I'll be glad to oblige!
13 years ago. | Permalink