The Kiosk of Hias Steiger 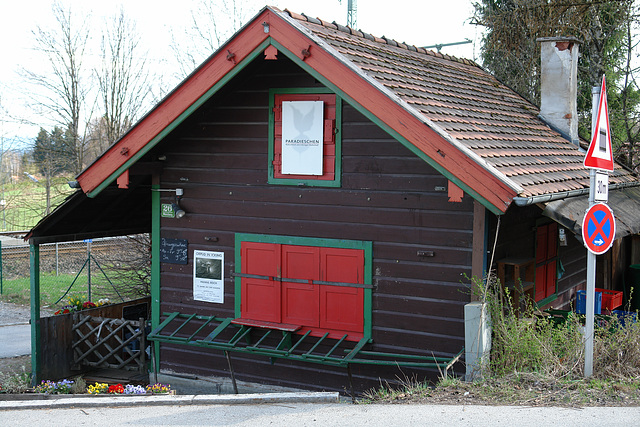 This is what used to be the kiosk of Matthias Steiger.

Hias Steiger repaired shoes and sold candy to school children who passed by on their way to the Icking gymnasium (not in the sense of “gym”!). He was full of stories and his shop was a social center of the village; you could find people like Gert (“Goldfinger”) Fröbe here hanging out in animated conversation.
He would, for instance, tell you about his father who suffered from cancer of the throat, and couldn’t speak anymore; how he used two card boards to make his opinion known: one said “Yes”, the other one “Kiss my ass”...

Of course, we haven’t known him ourselves and can only repeat the memories recorded by others, who did know him. Still, there is a strong connection between him and us: he lived in the house which is ours now, just on the other side of the tracks.

He died in 1983 without ever having left Icking for more than eight hours. The shop now sells organic food, and is being run by an actress (Sherry, you’re not alone!). It is called “Paradieschen”, which you may translate as “Little Paradice”.