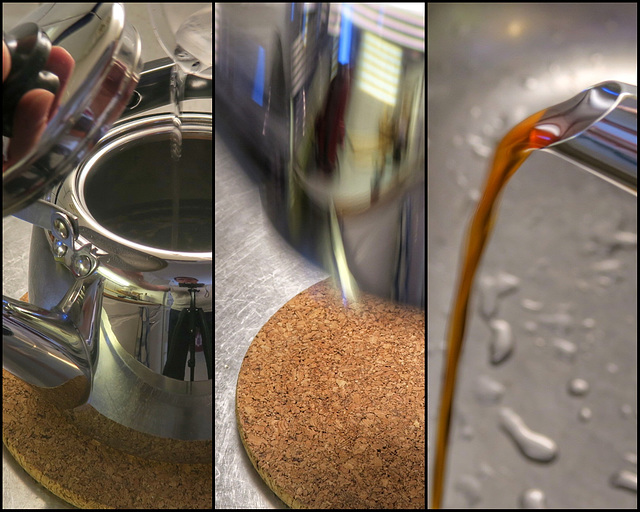 When making coffee in the most simple way, one just stir the grounds into a hot water. That has been the common way to brew coffee in Finland. And this is why so called water kettles has became almost as a symbol of coffee around here.

But when cooking coffee this way, one has to do something to get rid of the grounds, or to at least get as little of them into a cup as possible. There were several old traditions to gain this. One was to "scare" coffee grounds by pouring a little amount of cold cover onto the brew. Assumable this made the grounds sink into the bottom of the pot. Another way was to slam the pot against the table top, to achieve the same.

Next one had to let the coffee settle for few minutes in peace. And right before pouring coffee into cups, one usually cleared the kettle neck from grounds by pouring a little coffee into drain (or ground when having coffee outside). Then, when pouring coffee into cups, others often teasingly comments: "Do not slosh!" The purpose is to remind one should not pour coffee too hastily to stir the brew and get the grounds into cups.
CC BY-NC 3.0 Sami Serola Coffee 31/50

niraK68, Fred Fouarge, trester88, Berny and 10 other people have particularly liked this photo

Janano - club
I like this very much!
5 weeks ago. | Permalink