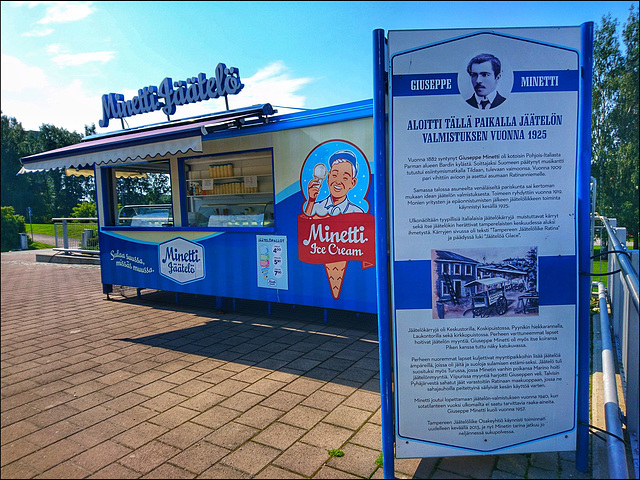 After getting home, I decided to update this a little. Giuseppe Minetti was a musician who immigrated to Finland in the beginning of 20th century. He was born in Bard, Province of Parma, North Italy. His instrument was kantele (Finnish zither). But the story I found did not tell how he ended to play such an instrument. Nor it tell if he played it before he immigrated, or if he started to play it after coming to Finland (part of Russia at that time).

Anyway, he married a Finn, Tilda, in 1909. Then around 1919 he got an idea to start making and selling ice-cream around Tampere region (Finland became independent in 1918). The ice-cream business by Minetti started in 1925, and ended in 1940 because getting ingredients became somewhat impossible at war time. Giuseppe Minetti died in 1957.

Later on, in 2013, a local ice-cream company decided to bring back the old Minetti brand name. And within a year they got into troubles because of tax avoidance. Surprisingly the brand name was still allowed to continue, and according to the latest news, they have manage to avoid bankruptcy and pay the fines.

Minetti ice-cream today is probably Italian only by it's name, but they indeed sell some really tasty flavors. I now tasted their novelty, apricot flavor, and it is definitely for my taste. And maybe the current owners thought some mafia goes well with the brand...

I definitely ate ice cream in Finland too, but it was not Minetti as 2011 was the last time I was in Finland. :)
5 weeks ago. Edited 5 weeks ago. | Permalink
Sami Serola club has replied to polytropos club
And did you got stomach ace afterwards?

I once had a big debate with one Turkish guy. He could not eat any Finnish dairy products because of lactose intolerance. But no such problem with imported dairy products. The conclusion of the debate was that Finnish cows are fed with fodder that causes it. And the ultimate reason for that are plants and soil.